So I’m assuming that I need to perform another factory reset and a hard drive format to completely clear all of the old reference files out?

Instead of reset, I would just go through the interface and tell it to delete the recordings

I considered that, but went ahead and did a CLI erase of the hard drive to assure it was completely cleaned off and then a factory reset on the Tablo and a format of the hard drive as a function of the setup process. Heavy-handed, I know, but I would rather start from a totally clean slate than have to struggle with issues down the road.

It’s downloading schedule data right now, so I’m going to leave it alone until that’s done and then set up some recordings. I’ll report back on what I find.

quirky thing. I had always been able to close the “main” window - the one with all the buttons for everything - and everything would close along with it.

Not any more. I close the main window and any other window is left. If it’s a feature, like those giant pictures following the mouse, then I’ll just close them all.

But if someone closes the main, and the one of the others are left, there is extremely limited, if not crippled, use of the program.
I don’t recall it being an issue, and I do know open jdk 11 recently had updates, but this seems like a lot.

Some releases ago, I was trying to figure out a quirk of why all of the windows were modal, when I figured out how to make them non-modal, it made it so that each window was a separate ‘app’, in that you could close any of them without affecting the others…while this wasn’t the intent, it was the result and I found I liked it better than not being able to access any other window…maybe I’ll figure out how to have them attached to the main window, but not modal…

and/or… if there we menus so if you did close the main there would still be options to use the others? But then you’d have to do GUI development

I’ve been working with TabloEngineering on some issues that this app is causing in my Tablos…trying to clean up some of the code so that it’s not causing those issues :)…I haven’t abandoned this project at all, just it’s so functional that I’m not having to make many changes to it

I haven’t abandoned this project at all, just it’s so functional that I’m not having to make many changes to it

Thank you and yes it is, well …those giant floating pics in the recordings? Nobody’s mentioned it, so I guess it’s no problem.

I do find it impacting function while looking at a table and suddenly a large portion of it is covered by a graphic :sigh: As for scheduling and show status - it’s on top of things!

Just to chime in, I use APL Tablo several times a week and I’m very pleased with the tool. The floating pictures are sometimes a minor annoyance but sometimes they are interesting but I’m not sure they are necessary.

After months of hassle free use, I fear I’ve encountered an APL Tablo bug

Having “weak signal” error suddenly, so I’m recording a show on both my tablos for trouble shooting. Both seem to to have made clean recordings, view the, well, information provided. Want to watch each and see if there’s a difference (here’s the problem) I click on Copy Tablo URL for either/any and there’s not an issue.

If I click on Copy Streaming URL - for any recording for tablo2, nothing happens?!?

Yes, there’s more log. Why it would matter, 2 is firmware 2.2.30 tablo1 is 2.2.28. I turned on discovery at startup to ensure it has address, but it found recordings. Even checked tablo1 inactive, and it still pukes. So it doesn’t appear to be a 2 device thing.

Odd yea, I can copy that address and

That’s the heading, it supplies a streaming playlist, functioning playlist.

The end of the error

I’ll sort through my logs and double check I have things straight and email what more info you may need.

I’ve been sitting on a release for the last several months because there wasn’t much change…but it turns out the changes I’ve made might just be helpful to you in this situation…so…go grab .24 and let me know if you are still having issues…if so, give me the stack trace again and I’ll fix it up for you

FYI…yes, any time you see an NPE, it’s a coding error in the Java source…so you most definitely found a bug in my code…hopefully I’ve already fixed it

Yup, that was it. THANKS! …what every, how or minute it was

Some of the features 3rd party apps offer… well not so much features as tools you may only use occasionally. When you’re trouble shooting it can be a time saver to have tools available.

Not a priority concern to me, noticed new columns (under the giant floating picts

). One headed thumbnails. Presume this denotes the creations of FF/REW thumbnails? also needed for com skip

Oh…and I also make that change you recommended to get rid of ‘blacklist’…I’ve never considered it a racially charged term, but can understand how it could be, and to be racially sensitive I’ve removed the term from my application

So…you may have noticed that that particular column was ‘hidden’…the reason being that I added that column to indicate exactly as you suggested it was for, but it caused issues with the Tablo…They don’t store this information in the base recording object, and to get that information I had to issue a ‘watch’ command to each recording which will, if generated, will provide you with a URL for the bif file that contains the previews, when issuing the watch command, the tablo allocates memory for that watch session…well, as you can imagine if you have dozens, or hundreds of recordings on your Tablo this can/and did cause memory allocation issues…so, I disabled the feature and hid the column…you can expose the column if you would like, but I’m not populating it at the moment because I can’t effectively give you the data without trashing your Tablo

concatenate a URL to the snap_grid dir via /pvr/ using the Object_ID HTTP ''hd_00.jpg`` check the response code 200, there’s thumbnails, 404, didn’t make it. OK, it may not be absolute and it’s a whole bunch of queries - initially until the DB is updated.

It’s a toll on tablo with out the memory allocation… if it matters. But, I’m just kind of guessing, this may not even be possible in real world application.

as for it being hidden, fist thing I do is get rid of some, for me, pointless un-needed columns to clean things up… so I see things.

I’ve been trying to avoid using the ‘old api’, but I certainly wanted this information but the current API doesn’t provide a good way to get it…perhaps that’ll be in the next release

While in the All Airings window, if a user clicks Refresh Table, it seems to also “refresh” the the tags dropdown… well, more like increments the tags 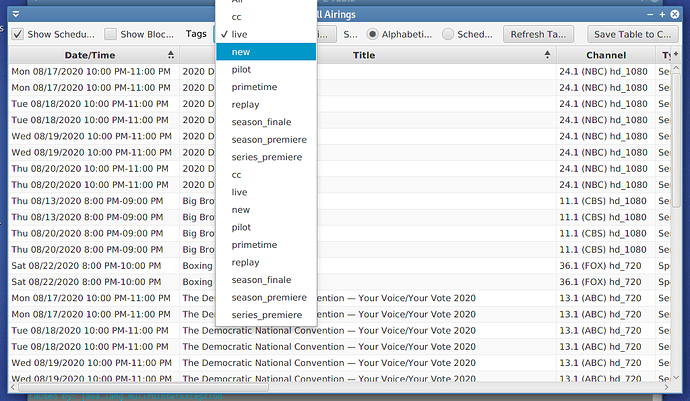 Guess what happens when you Refresh Table a 3rd time… -_-

I stumbled upon this after clicking Options, with out selecting a show and generated an error

I refreshed the table to see if I screwed it up, no everything continued to work as expected. I was looking for a search - in the wrong places.

Sir,
Thank you kindly for finding both of these issues. I’ve corrected both and provided version .25

Did I loose something along some where? Seem to recall several more variables to use in the template, thought they were in the question mark button? Of course this is about the only dialog box not resizable, so may it’s buried?