The Antop 400-BV antenna has renewed my faith in OTA service.

This antenna is currently unamplified, shared between 2 Tablo OG 4-tuner units, and picking up stations from 3 different directions.
My regret is not wasting money on the previous antennas, it’s missing out on the performance of the new one.
Like buttah!

Getting a tingly feeling imagining what it’ll be capable of once installed on the roof.
Oof. 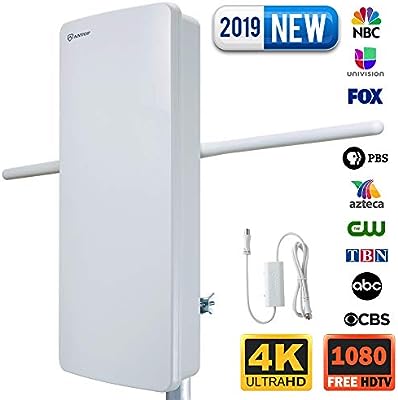 I’ve been looking at this a possible replacement for my Clearstream 4. I’d like to find graphic analysis of the beam pattern though. My issue is with towers 37 or so miles away and then other towers, almost 45 degrees in a different direction, but only 8 miles distant.

I just received mine but have not finished installation as I need to drill through my cinder block wall to run the cable to an outlet. I decided not to use the supplied coax because it is not Quad shielded and I always to do want that for outdoor installs.

But in the meantime you can use the Antop selector to get a coverage map for your address:

Someone on Amazon said the antenna sees around 120 degrees.

Welcome to the (Antop) club. I originally purchased my 400-BV with the intent of using indoors (it comes with an excellent pedestal / stand. Ended up going up on the roof with it, but haven’t had to use the vhf crossbar inserts (I refer to it as a “400-B” haha) … I get every station possible without them. I really love Antop product.

With limited technical knowledge and no experience in antenna TV, I ended up getting the Antop AT-400B. I realize the more conventional types (Yagi design, etc.) are great choices and that companies such as Channel Master and Clearstream make great antenna product. After a bit of research, I landed on the Antop, primarily because it would look so nice in my living room. It pulled in more stations than what my leaf antenna had, which made me wonder “what would this be like if mounted on the roof…

Just finished my install. All I can say is that the AT-400BV is a really good antenna. I did a scan with the amplifier turned off and it found 77 channels. With the amp turned on it went to 80 with only a few having less than 5 green dots.

I can now received a low power station that has NewsNet OTA 24 hour news. With the old Winegard Flatwave Air I could not even see that station on a scan!

I left the VHF-H cross bars on since NBC is VHF-H in my market. Comes in nice and strong.

I have the Clearstream 4V with an RCA preamp, works really well. Try adding the VHF antenna retrofit to your Clearstream 4. You might get the channels you want.

Also are you using a preamp installed directly at the antenna mast?

Yes, I have the Juice preamp on there right below the antenna, outside, on a 20ft mast.
And the only VHF stations I’m even mildly interested in are coming out of Canada. Everything else nearby is UHF. I’d be interested to see if the 400BV can do a better job than the CS4. I wonder if I bought it off Amazon would I be able to return it if it didn’t work any better than what I have.

Items shipped from Amazon.com, including Amazon Warehouse, can be returned within 30 days of receipt of shipment in most cases. Some products have different policies or requirements associated with them.

NOTE: Be aware that Amazon monitors how many items you return. If you do that a lot they will cancel your account. Apparently some people take advantage of the policy…

That said you may find that the AT-400BV exceeds your expectations. It is pretty highly rated.

I just bought the ANTOP 402BV from Frys. It cost me $60. I set it on a dresser by the window on the second floor of my house. It works better than I had expected. I have been unable to pick up ABC, Fox or NBC. With this they all come in crystal clear. I may put it in the attic to see if it works as well up there. The price at Frys in store was over half off what I found on Amazon, so I have been very happy so far.

Peter Carcione has an interesting review of the 400-BV. It outperforms his large yagi at 60 miles (12:00 minute mark of the video)!

Antop calls the antenna “Multi-directional” (as opposed to their “Omni-Directional” models).

My experience here in Indianapolis, where most of the towers are about 10 miles NNE of the center of the city (I live about 5 miles almost due W of the center of Indy), but a couple are SSE and SSW (about 25-45 mi), and at least one is WNW. I get all the ones that tvfool.com says I should be able to get, and with almost zero pixellation, dropouts, etc.

OK… I bought the AT-400BV. I bought it direct from Antop instead of Amazon. I had emailed them asking about technical specs and they said they’d work with me on the price. They did. Shipping included but it’s UPS ground instead of the 2 day shipping I get with my Prime membership, but the savings made it worth it and I’m really not in a huge hurry. So… maybe by the end of the week.

Will be interesting to hear the comparison between the 400BV and the CS4. Two different styles of antenna.

The CS4 is a good antenna. My problem is just the spread between the 2 “tower clusters” I have to use. There’s a bit more than 45 degrees between the 2 locations and the beam width on the CS4 is advertised at something like 43 degrees. Complicated by the fact that one cluster is like 37 miles away and the other is 8 miles. The 400BV is 120 degrees. I should be able to aim directly at the distant towers and still have the close ones within the beam width of the 400BV.
Probably without amplification.
My major networks used to all be at that distant location. There has been some shuffling around and now a couple are sharing towers at the near location.

The 400BV is a longitudinal antenna (looking at the interior, the two reception bays are aligned columnwise). The CV4’s bays are side by side - wider than the 400BV. A wider antenna (like an 8 bay CM4228) has a smaller beamwidth than say a 4 bay (CM4221). So the 400BV may give you a wider beamwidth due to its long physical design.

The 400BV is a longitudinal antenna…So the 400 BV may give you a wider beamwidth due to its long physical design.

Right now I’m dancing a fine line between the 2 locations. The 400 BV may also get me some additional stations off the backside out of Canada and some VHF that the CS4 can’t do. Neither of those 2 things is terribly important to me. I really just want the 8 channels I’ve selected (out of like… 63)… to come in reliably without me having to go out and tweak the antenna a hair this way or that way depending on whether some pixie passed gas upwind of some arbitrary place.

I have to say though… this whole Tablo foray has been better than expected. The wife just told me to buy the lifetime subscription and buy 2 more Rokus for the other TVs so we can “get those Tivos out of here”. I’d call that an endorsement hahahah.

“get those Tivos out of here.”

OK… I bought the AT-400BV. I bought it direct from Antop instead of Amazon. I had emailed them asking about technical specs and they said they’d work with me on the price.

How exactly did they work with you on the price? I’ve got a basic Mohu Air 60 I got at a really good refurb price from Best Buy last year but going into Spring I’m worried about the reception issues I encountered last year when the trees were full.

Based on all the comments I’m seeing here the 400-BV is on my short list should I need to look at an antenna upgrade. Current antenna is in the attic so were I to move to it, I would want it in the attic as well.