Looks like TiVo is trying to out price Tablo. $300 for 4 tuner and lifetime subscription is quite cheap. Of course, this is a one TV solution but still something to be worried about. 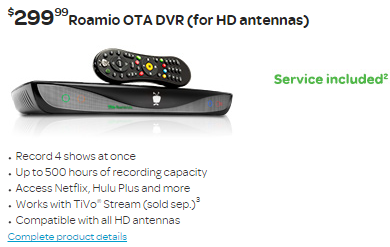 As TiVo expands cord cutter marketing, they’ve now brought a Lifetime Service option to Roamio OTA. At least on an experimental basis. For a single $300 fee, you can now pick up a Roamio OTA bundled with a lifetime of TiVo service. Given...

I don’t think it’s really undercutting Tablo at all. Like you mentioned, it’s a one TV solution. I bought my 4 tuner TabloTV AND a 2TB drive for just under $400 ($399 including tax). Divide that by 6 (number of concurrent devices that can connect to it) and it cost me about $66 a TV/Device. That’s pretty darn cheap. Even if you divide it by 4 (number of tuners) it’s still only $100 a TV/Device, 1/3 the cost of the Tivo solution.

ok so throw in the lifetime and it’s a bit more but even at 6 devices with lifetime you’re still at $92.00 a TV/Device.

You can add additional receivers for $150 each.

For people that want to cut the cord and just want to watch shows on TV sets, this new Tivo deal is a pretty good option.  But I still like to watch tv on portable device and away from home, and the Roamio OTA DVR is limited on that.
theuser86 May 1, 2015, 3:46pm #5

You can add a TiVo Stream and watch TV away from home on a smartphone or tablet.

Tivo Roamio OTA is a very good DVR and you can add Tivo mini’s (which also function as a kind of limited Roku with Netflix, Amazon, Hulu Plus, Pandora support built in) for about $114 apiece from Amazon. This price includes lifetime service for each mini. The setup works really well (I have 5 mini’s). It is fast, stable, reliable and has lots of functionality, such as integrating streaming and OTA with OnePass. But, here’s the deal on Tivo’s promotion – they pulled the old Directv, u-verse, Dish ploy. It is only for new customers that buy a lifetime Tivo / OTA together. They have no options for existing OTA customers other than paying $14.99 / month forever. I just chatted with them and was told this. So, in short, they’re trying out the business model that made most of us cord cutters in the first place…reward new customers and ripoff existing customers. Guess we will have to see how well that works out for them :)

It will work well for new customers, I hear the device is a bit more polished than the Tablo from a UI perspective.

I still love my Tablo and wouldn’t change because I like the ability to use my Fire TV and Roku away from home.

I too love my tablo and wouldn’t change. However, (just being honest) had this deal been available when I purchased my tablo I can honestly say that I would’ve gone with this tivo deal.

When I cut the cord I was looking for something close to the “traditional dvr experience” to smoothly transition my family from cable to ota, but I didn’t want to pay just shy of $1k to hook up a dvr to 2 tv’s with a lifetime subscription.

With that said, I can see this as being a possible threat to tablo because of some of the basic dvr functions that tablo lacks and simplicity of the setup, but imo tablo still gives you way more for your money with its wide range of compatible devices.

Yes, a good deal for new customers. IMHO there is no comparison between the Tivo and Tablo UI experience. Tivo has built DVRs for more than 15 years and along with ReplayTV invented the category. The UI is very polished, albeit a bit overdone. They have every feature you can think off and more. Tivo UI is a Lexus, Tablo is currently closer to a moped - capable, but very basic. I’ve used both fairly extensively, so just expressing my observation. :).

Streaming while away is certainly nice, though my < 2MB up speed makes that difficult. Can’t honestly say we’ve ever taken a Roku on a trip, though. There’s the option of using the free kmttg app to extract shows off of the Tivo and view them wherever you’d like. We’ve done that a couple of times, but that’s about it.
As always, that’s just my two cents worth

What features does TiVo offer that Tablo does not?

Also, this would require you to hook up directly to a TV, right? The appeal of Tablo for me was the ability to move the antenna out of public sight and still get OTA on multiple TVs.

Since the Tivo is a classic DVR, the picture quality will be identical to what you see on the TV.   Anything that takes advantage of 60 FPS (like sports at 720p) will likely look better.

The Tivo interface has been around for many years, so there are functions it can do that the Tablo can’t (adjust start and stop times, delete seasons easily, keep so many shows, etc).
Tivos also have apps like Netflix and Amazon Prime built in (though you can argue that any device that the Tablo connects to has those as well).
To make a Tivo system like a Tablo system does require a lot of hardware.  You would need the $300 Tivo OTA, a $149 Tivo Mini for each additional TV, a $130 Tivo Stream to send to your portable devices, a new hard drive (optional, but the Tivo OTA only has a 500 GB drive.  Replacing the internal one makes the most sense), and an antenna.
Tivo Minis have to be connected through ethernet or a MoCa network.  You don’t get the flexibility of a wirless Roku or FireTv device.
sesipe May 1, 2015, 6:48pm #12

A fairly extensive list. Most of what is on the Tablo wish list. But, to name a few – the ability to select a particular station for recordings when the same show is shown on multiple stations, extend live recordings by a specified amount of time, extend series recordings by specified amount of time, limit number of episodes, retention options (delete when space needed, keep until i delete), openpass - which integrates streaming and ota episodes of shows into a season/episode view. I suggest looking at tivo.com or youtube if you want to find out more about the options. This is a Tablo forum and I’m certainly not here to sell Tivo’s. Lol. Those are just my observations.

Yes, Tivo requires an HDMI hookup to the main TV. My antenna is outside on the roof (mounted in the old Directv satellite pole, lol) and runs into the back of the Tivo using the same RG6 cable I already had from Directv. Oh the irony.
I too found the network tuner capability of the Tablo quite flexible. But, Iwasn’t sold on the DVR experience as it stands today. That’s not to say it will always be that way, but I’m talking about a decision I had to make given current capabilities, not what they might be a year from now. In a year I’ll reevaluate both and make another decision whether to continue with Tivo or move back to Tablo. That’s why I’m still actively interested in these discussions and rooting for Tablo to succeed.
faganm24 May 1, 2015, 8:02pm #13

This is really interesting.  The thing that burns me is the Lifetime subscription costs being tied to equipment.  I’m just not sure how long I can count on 1 piece of equipment.

What features does TiVo offer that Tablo does not?

Also, this would require you to hook up directly to a TV, right? The appeal of Tablo for me was the ability to move the antenna out of public sight and still get OTA on multiple TVs.

There are people that run their Roamio “headless”, meaning that they put it where they want, connect it to their network and then use Mini’s to access programming.

To make a Tivo system like a Tablo system does require a lot of hardware.  You would need the $300 Tivo OTA, a $149 Tivo Mini for each additional TV, a $130 Tivo Stream to send to your portable devices, a new hard drive (optional, but the Tivo OTA only has a 500 GB drive.  Replacing the internal one makes the most sense), and an antenna.

That’s actually not true at all. To make your TiVo system just like a Tablo you need the exact same amount of hardware.

It a three TV home for Tablo you need:
1 - Tablo
3 - media streamers of choice
That’s 4 boxes total to make the system work.
For a three TV TiVo setup that operates like a Tablo you need:
1 - TiVo Roamio OTA
2 - TiVo Mini
1 - TiVo Stream
That’s 4 boxes total. Every TV works, and your tablets and phones can connect inside and outside of the home, just like Tablo. The money ends up being a virtual wash at $300 with lifetime on the TiVo.
This is just a price test for TiVo. They are also running a $400 test for Lifetime with device, a $50 Roamio with $9.95 service and a few others. The money could change.
markfrommi May 1, 2015, 8:19pm #16

Can you download for offline viewing on TiVo?  I’ve accepted the fact that Tablo will never add this feature.

Can you download for offline viewing on TiVo?  I've accepted the fact that Tablo will never add this feature.

You can with an iOS device and a TiVo Stream. There is also an open source program that will do this without a Stream like the one that exists for Tablo.

You don’t use a Roku at all with a TiVo, it is a traditional DVR. You have an HDMI input for it just like you do your Roku.