Perhaps these are already available but I don’t see where the option is…
Signal meter displayed on the TV as a utility, to help tune the angle for antenna. to find the perfect direction for optimal signal
When I leave a program in-midplay because I stupidly hit the HOME button on Amazon FIRE (or for any other reason) why not tag the point in time for a resume option? Another factor is when I leave a show, go to bed, and want to pick it up where I left off, the next day.
Allow me to set a specific “over-run” time when I set up a recording?
Add a configuration choice so when I load Tablo, have “Recordings” as my startup screen instead of live TV.
Be able to set how far ahead the right double-arrow jumps, and how far BACK the left double-arrow jumps, in terms of seconds. The feature works great for the fast-forward, I love being able to see the thumbnail. Typically, I go ONE past, then back up one, and would like to only go back HALF a step. Typically it takes around TEN presses to get to the next program segment, so being able to double-down, or more…
Oh, WIBLI? “Wouldn’t It Be Lovely If…”
And the “help shape the tablo Roadmap” thread has 1197 comments. Seriously?

These are probably already requested somewhere in there…
VERY grateful for the Tablo, just hoping for evolution of the feature set, since I’ve lived with first TiVo for a decade, and the DirecTV’s recorder for another decade or so. Cutting the cord was the best thing I’ve done in quite some time. I’m just kinda greedy for a feature set that’s “everything” I want.

You can currently change the startup location. Go to the settings screen, under General there is Startup Section. It is a drop down box. This setting is per device so you need to go to settings on each device you use for Tablo.

You are entirely correct, I looked there before but failed to see it. My bad. thanks for helping. l wonder why Tablo can recognize when I exit a particular recording, and then immediately go back into it, “Resume at 7m 2s” and “Play from beginning”, but won’t offer the resume option at some later period of time. Also, if I have 4 episodes and have watched one of them, it’s displayed in the same level of bright font, rather than a dimmer font, so I can’t tell on the surface whether I’ve seen that episode until I actually load it. Small things, to be sure…it’s funny what feature sets one takes for granted…
thanks, again…

No idea. I’m just a user. Maybe @TabloTV will answer.

l wonder why Tablo can recognize when I exit a particular recording, and then immediately go back into it, “Resume at 7m 2s” and “Play from beginning”, but won’t offer the resume option at some later period of time.

What device are you using?

Are you trying to resume between two different devices?

As for knowing if something has been watched, there are watched indicators… No blue dot = watched. Half blue dot = partially watched. Full blue dot = unwatched. 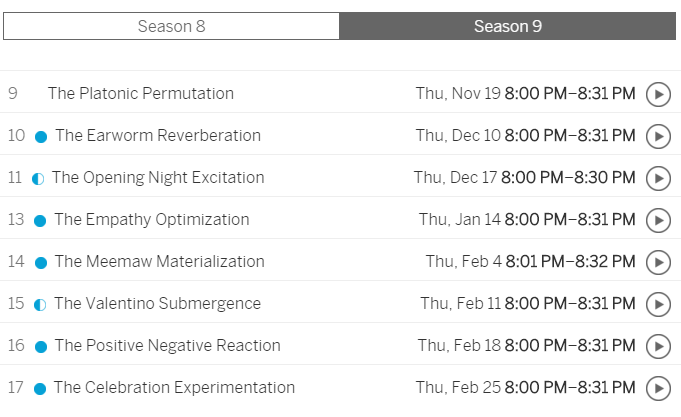