Why was the Super Bowl not considered a sport or special event?

This was brought up in the “extend recordings” thread, but I felt it deserved a thread of it’s own.

The timeslot was 3.5 hours, but the Tablo should have extended the slot to 1.5 times that, which would have been 5.25 hours. Instead, it was just 3.5 hours, so no one that recorded it on their Tablo will see the end of the game.

I just hope this never happens again, or the Tablo team finally implements a way of setting extensions per show.

This was the question I had - so it was not marked as a live event?

Yep, that. Maybe CBS hasn’t been marking Recordings as live (Broncos fan, so CBS is mostly what I would record). I almost never see the end of the game. Just wanted to preserve this one since I can. Disappointed.

That’s why it should either be for all sports or make an option so we can see how long it gets extended and change it. 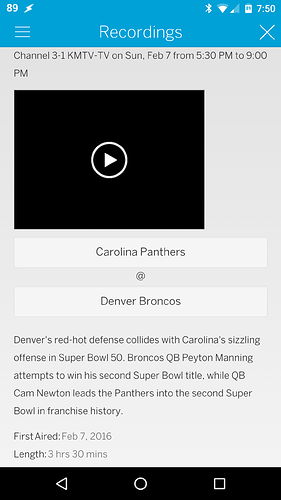 This is what I have. No live distinction.

Option per show would be awesome

This is a big issue for me. I know I can manually record the games, but extending recording on a per show basis should be a top priority (just behind native appletv app

Each local station decides whether to mark events as ‘live’ and that’s the flag we need to set the extension.

It could be that they didn’t but we’d need to look at each individual Tablo to know.

As for ‘advanced recording options’ this is definitely a popular request that I’m hoping we can tackle sooner rather than later. Unfortunately, the logic could get quite complex!

@TabloTV
My Tablo recorded 5.25 hours of the Super Bowl event, which was scheduled for 3.5 hours.
My Tablo firmware at recording time was v2.2.9 Beta 1.

My Tablo recorded 5 hours 15 minutes of the Super Bowl running 2.2.8 firmware at that time.

My Tablo also recorded 5 hours 15 minutes of the Super Bowl running 2.2.8 firmware at that time. (I just wish Tablo could set it to skip half time show:grinning:)

This is annoying. It appears that it must have been my local affiliate. I would love for all sports Recordings to be extended.

I’ve seen some inconsistently on how long other shows are recorded as well… usually, Tablo tacks on 5 minutes to the end of regular (non-live) shows, but occasionally, there is no extension of time and the show cuts off after exactly 30 or 60 minutes from the start of the show. I haven’t yet seen a pattern, if one exists, for that behavior.

I have a two tuner, and I did have back to back shows being recorded on PBS at 8 and 9 pm, so maybe that caused it. It was still unexpected.

My Tablo recorded 5 hours 15 minutes of the Super Bowl running 2.2.8 firmware at that time.

Same here - 5 hours 15 mins…Raleigh/Durham NC.
I think what Tablo said about the “Live” event marking be per local affiliate may be the issue.

occasionally, there is no extension of time and the show cuts off after exactly 30 or 60 minutes from the start of the show. I haven’t yet seen a pattern, if one exists, for that behavior.

If the Tablo needs a tuner for another live stream or a recording, it won’t add the 5 minute buffer on the end.

Ah! That explains it… occasionally, I record 4 shows at once, using all available tuners. Giving up the 5 minute extension is a small price to pay for that capability.