Which Guide Provider is used?

I have ordered the Dual HDMI but am out of town for a while until I can get back and try it. I am curious as to which company provides the guide to Tablo. I fought with Tivo for years over incorrect guide data. Even Titantv promptly corrects problems just to let them slip back incorrectly in a few months. It seems that matching OTA channels to correct guide data and actual RF frequency has been the greatest challenge to recording from an antenna since the digital transition.

Like Tivo and others, it could be changed in the future.

Gracenote is preferred over Rovi. I had DISH when they switched to Rovi and not only the guide had many errors but they have oddly worded show descriptions. However, my Sony Android TV uses Gracenote and has always shown “no information” for my local ABC station. If that is the case when I connect the Tablo it may be my first support ticket.

If one does not continue with subscription is the 24 hour guide still Gracenote or is it PSIP?

is the 24 hour guide still Gracenote or is it PSIP? 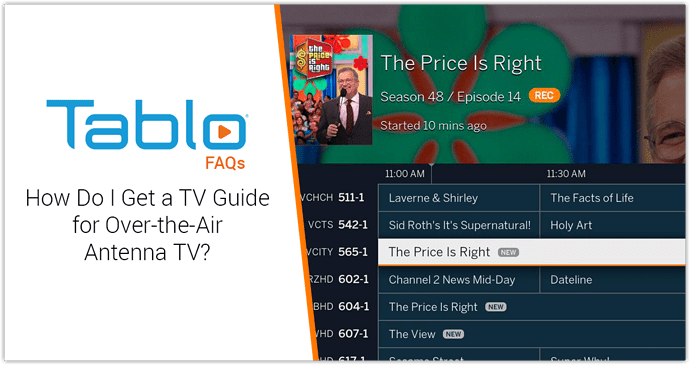 Tablo FAQs – How Do I Get a TV Guide for Over-the-Air Antenna TV?

There are many options for cord cutters wanting a TV guide for OTA antenna TV, but the quality and availability of those guides will vary depending on the type of data being provided and the equipment you’re using.

Today I FiNALLY got guide data for REWIND TV. STILL missing DigiZtV but it doesn’t launch until Sept 27. It should say upcoming preview or something similar.

Mine’s still confused. Even did a full channel rescan, and while my other Tablo shows rewind even on the live schedule, when rescanning, while on the other it showed as rewind, after it was done, it shows Cozi. Regardless, in both cases, the channel guide is displaying Cozi.

Tablo may have some amount control of gracenotes via feeding it specific unit versus account setting.

Be careful what you wish for.

I have 3 units and while I don’t record much sub-channel programming, I woke up one morning and one unit had flipped the antennatv channel off by 3 hours. So when I opened a ticket. I ended up with just one unit flipping from good to match the bad unit. It took 2 months to get both fixed.

I live on the west coast so some sub-channels actually broadcast the east coast feed - regardless of the fact the channels WEB page schedule indicates there should be a west coast feed. Thus the guide is 3 hours off. It use to be easy to get this fixed.

When the bounce channel came online in April it was 3 hours off. No matter how I explained the problem and solution support seemed unable to comprehend that the problem was specific to one channel. It was like slowly pulling out your finger nails. So six months later it’s still 3 hours off.

https://www.watchdigitv.com/ FINALY has guide data. Click in schedule. Nothing until Monday, when they begin broadcasting shows. Lets see who adds it first. My prediction, based on past experience, it will be on TitanTV prior to Tablo.

EDIT: I JUST checked www.titntv.com and THEY ALREADY HAVE IT. I had to CREATE IT as 31.6 by searching for DIGI-TV Too bad Gracenote doesn’t let us do that instead of waiting for official notification from the station.

My RewindTV was actually a new station - not replacing another. It is on a Nexstar owned station - we have 3 of them, to split the sub-channels up between.