I am having a problem where I am trying to view my Tablo through a chromebox using the web app. Through my initial trial 30 days with the guide everything went off without a hitch but just after I paid for my annual subscription to the guide I started experiencing problems. I’m not saying that paying for the guide service caused the problem just giving all the details I have in case anything is helpful.

I have the Tablo 2 tuner 64gb model that I purchased refurbished in January. It is on firmware version 2.2.26. I am using a seagate backup+ 500GB hard drive attached. I have the tablo connected through Ethernet to my network. My web app device is an acer CXI2-4GKM chromebox.

When I have the problem, the tablo will show the recordings page as normal with all of the headings at the top for sorting and the page looks normal as it should except for the body where you normally see the graphics for your recorded shows, it’s just blank/empty.

Then when this problem is happening and I go to the live TV section it’s showing all of the time slots at the top and the page looks normal as it should but it does not show the channel number or name on the left column and it also does not show any program data in the middle as it normally should. If i click where a channel would normally be to try to view it live, nothing happens.

I have read a previous post from years ago that I found on here that stated to go to the connect page for the tablo then use the red X on the right to unsync from the tablo then re-sync. That does work successfully to bring back my live TV and my recorded shows. However I have to go through this literally every single time I access my tablo via the web app.

Also I have had it happen 3 or 4 times now in the past week that I have been watching a recording over the web app and it will just exit the playback of the show and resume the above problem where live TV and the recordings are blank. Then after successfully disconnecting, unsyncing, and re-syncing it will show everything again but it will not remember where I was at with that show that I was just watching and it will start it over as if I had not watched any of it.

I have checked my iPhone app while all of this is happening and the iPhone app displays recordings correctly all of the time so far.

I am wondering if there is anyone who has been experiencing anything similar to me or if anyone has insights to a resolution or fix for my problem? If any more info is needed just let me know. Thank you for any help/suggestions you can provide!

I’ve had some similar happen when google-chrome-beta updated. Was shocked until I found everything using a different source.

I deleted site settings and cleared things up. At this point I can’t confirm nor deny if it’s reoccurring or how this relates to a “chrome box”

I did however go in and go to the site settings to find all of the tablo stored cookies and site data and deleted those. It still had me re-sync to the tablo server, pulled up the information for recordings and live tv but the issue returned about 45 minutes later where it stopped playback from the recording and would not show anything in the recordings section or live TV until I un-synced and re-synced to the server.

This happened what playback stopped… not closing out or leaving my.tablotv.com ?? That’s real screwy.

I haven’t been able to reproduce the occurrence (well I haven’t actually done anything other than access my tablo).

Correct it stops playback of a recording anywhere Between 14 minutes and 30 minutes through a recording every time now and gives an error. “ There was and unspecified error during the sync process. “

The only way after it fires that error for me to see my recordings again is to disconnect, delete sync data then re-sync to be able to watch another 14-30 minutes of a recording… 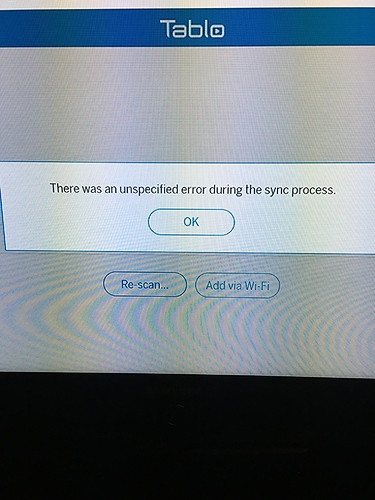 Now that’s flubbed up. I’m thinking that may not be browser specific - but I’m not a tech. Suggest trial and error if you can run Firefox on your system.

Do you have playback issues on other devices?
Is the “chrome system” wired to the network?
Unfortunately you may have to contact tablo support

Thank you @djk44883 for at least chiming in and confirming this is a weird situation! I do appreciate it!

As for testing, I was able to watch, without issue on an iPhone an entire show and have never experience the blank recordings page or live tv page on the iPhone app.

I am currently testing on a different chromebook that I have (Acer C720) that is no longer updated by google any longer so is on an older version of google chrome OS (76.0.3809.136) and that is going through without any problems.

I will shortly be testing on another computer I have, a Dell Precision M2800 that I dual boot with windows and Ubuntu, but almost exclusively use Ubuntu (18.04.1 LTS).

So far it seems to be relegated to only one device, the Acer Chromebox CXI2-4GKM. And from my understanding it would have to be related to one of the last couple updates that have been done to the device as it was working perfectly without this problem when I first got the device within the first 30 days.

In response to the other questions, the chromebox is hardwired to the network also. The chromebook (Acer C720) is on wi-fi.

The next computer that I will be testing on (the Dell machine running ubuntu) is hard wired to the network.

I do have a support ticket open as of yesterday and I’m sure they will be getting back to me later today. I just thought I would post here first to see if any users had any similar situations/fixes/etc. I know that my case will probably be a lost cause to some degree as the device that I’m using (the chromebox) is not a popular device that millions of people have… But there’s always options to change that out to a different computer if the support team doesn’t have a resolution.

Thanks again for commenting on this with your thoughts and input!

After further testing I believe I have resolved my problem!

As it turns out, at some point I had ended up on the Chrome OS beta channel on the chromebox that was having the troubles. The latest version of Chrome OS that I was on with the troubles was 81.0.4044.42. After reverting to the stable channel it reverted back to Chrome OS version 80.0.3987.128.

Since that reversion I have not encountered the problem yet over the past 2 days. So I believe that is the resolution to the problem! If it’s not, I will report back.

As with @cjcox, after I cleared some settings specific for my.tablotv.com it’s been working without issue.

In the end, it’s working.