Perhaps my experience is anecdotal, but I have had horrible luck with the Tablo “recommended” Western Digital Elements external USB disk drive, namely the 5TB model (reference WDBU6Y0050BBK-WESN).

My operating environment is clean and cool, with surge protection (both local power strip and whole-home suppressor.)

In the span of 13 months, I have been through two drives that have totally failed. Both were brand new, and died without warning. When I connected the units to my PC, and ran the WD Dashboard app, the drive’s S.M.A.R.T. status was “poor” and I could not format the drives under Windows.

More telling is that WD has reduced the warranty period from three years to one year, which looks like they know they are selling crap.

Appreciate your 2 sentence on the subject. Always nice to get feedback on what does/doesn’t work for others.

Website still says 2 years, but 3 years still for the My Passport version (vs. the cheap Elements version).

Btw: I use the My Passport drives, but have upgraded over time and currently use their 4TB versions, having replace the older 3TB versions. How long did they last (the 3TB ones)? They are still alive, just not in use currently, Bought them when they came out, so they’re pretty old.

Edit 2: The drives are 24x7 on my Plex server. I use absolutely ancient Hitachi Touro drives on my Tablos.

I’ve been using Seagate Expansion 5TB Desktop External Hard Drives on my two Tablos. The oldest one since September 2015 and the other since November 2017. I realize that model is no longer available, but the two I own have served me well.

Your Seagate “Desktop External Hard Drives” use 3.5" HDDs. The “Elements” series are smaller “portable” units, and use 2.5" HDDs. So, apples vs. oranges.

I’ve been using a 1TB Elements HD (WDBUZG0010BBK-WESN) for 3 years with no problem.

Not surprised. 1TB is much easier to manufacture than 5TB. Higher density means more chances for failures.

On the Western Digital warranty website, I specifically checked my failed 5TB Elements using the precise model number, and it’s now only one year.

Right, but I’m saying I’m using a drive that is a 2.5" HDD just like yours so it could also be you have a “bad” drive. 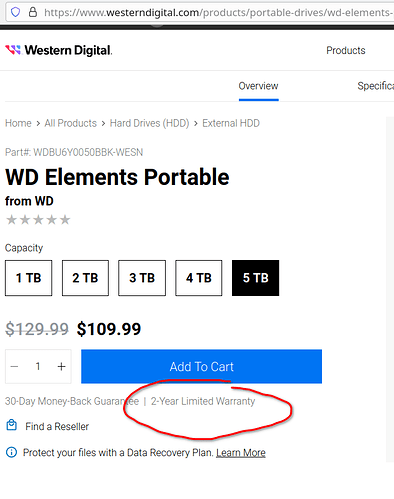 Good to know. I’ll never buy one though.

Your Seagate “Desktop External Hard Drives” use 3.5" HDDs. The “Elements” series are smaller “portable” units, and use 2.5" HDDs. So, apples vs. oranges.

Perhaps they make some with 2.5" drives but I have shucked at least 4 Elements drives and they are all 3.5". They have all been reliable too. I can’t rate the enclosures so confidently since I don’t use them.