This might help determine if signals too strong. Pretty cheap toy to play with. 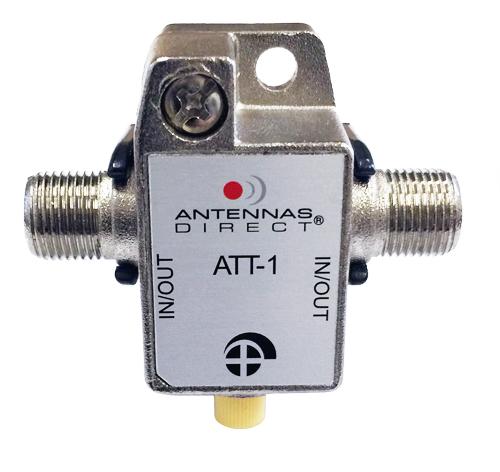 Antennas Direct 0-20dB TV Antenna Variable Attenuator (ATT-1) What Does an Attenuator Do, Exactly? We'll help you determine if you need this 0-20dB TV antenna attenuator by Antennas Direct. If you live close to your broadcast towers, you might...

That is pretty slick.

Tried it. I think you would be be better of buying the 3 most common fixed attenuators or daisy chaining several splitters.

Neil0214…Did you notice any improvement in the Tablo reception after reducing the input signal strength and if so about how many db reduction was required?

I went from no NBC to being able to watch NBC after the Repack. Without the antennators NBC was black after the repack. I was using the attenuators to try to balance reliability between strong and weak stations. I do not get a direct signal but I have to use a reflected signal off an adjacent building. I was using an amp to stabilize the signal. By relocating the antenna I was able to get rid of the amp, the attenuators and get a good signal that has been stable for several months now.

I order the atenuators from americanradiosupply. I think I got a 2, 3, 6 and 10 db. Stringing this together with some signal splitters allowed me to reliably vary the attenuation. The shipping may have been more expensive than the attenuators. So it is cheper to order several than to try one or two than to order more later. The shipping was a little slow but reliable. I was able to balance the weak and strong signals while using the amp and attenuators but I did not have a reliable signal until I found my sweet spot on the adjacent building.

I got more reliable results stringing the fixed attenuators with the splitters, than trying to use the variable attenuator.

Neil0214… How many db of attenuation did you leave inline permanently? Thanks.

consumer versions of variable amps/preamps/attenuators are likely to add more noise than the fixed-value amps & attenuators.

daisy-chaining attenuators is usually ok but can cause problems, every connection introduces a risk of bad-connection. as you discovered in the end it is best to use one attenuator with whatever optimal # of db value that you determine via testing. pretty cool above how you used the variable/combo setup to determine what was optimal, and settled on the one value.

Using amp plus attenuators at same time tends to introduce excess signal noise and degrade reception. One possible use-case for using both amps and attenuators is if you have other devices with variously-sensitive/various-generation ATSC tuners and/or very-different-length cables going to each location with a tuner. (Avoid this setup if possible - one beauty of the Tablo is that it was architected to allow the residential user to avoid that nasty RF use-case/problem.)

I have noticed occasional pixilation on one channel. I don’t know if it is caused by signal overload or multipath interference or something else.

As an experiment I have added a fixed 10db attenuator in series with the antenna lead befor the distribution amps. A channel rescan on the Tablo showed the same signal levels (all green dots) as it did before I put the attenuator in the circuit. It will be interesting to see how stable recordings are over the next few days.

Agreed but I have an unusual situation and in my ignorance, I was trying multiple things until I got it working and then I backed into the simplest solution. It is hard to trouble shoot a black screen.

I ended up with two 6 db attenuators in the leads to my two Channel Master 8 port distribution amps. Pixilation on problem channel was not 100% eliminated but greatly reduced.

Putting in two attenuators also helped to decouple the inputs to the two distribution amplifiers as opposed to one attenuator in the main antenna feed. 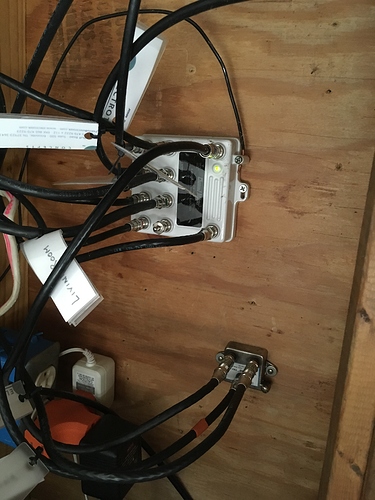