Some of you will know that I have been VERY disappointed with my Dual HDMI Tablo. I have experienced a large number of software bugs, slow performance, frequent reboots, etc.

I finally decided I just couldn’t live with the Dual HDMI any longer. I searched for other options and kept coming back to the fact that I purchased a lifetime guide subscription with Tablo and I would have to eat that cost and buy a new guide subscription from another vendor.

Even though I hated giving more money to Tablo I decided to buy a refurbished Dual Lite and use it with a Roku.

The Roku arrived before the Dual Lite and of course I had to start exploring the Roku. One thing led to another and I installed the Tablo app on the Roku to be ready for when the Dual Lite arrived.

Much to my shock and amazement, the Roku recognized my Dual HDMI and - It works perfectly !!!

All the problems bugs and errors that appear when I use the Dual HDMI through the HDMI connection are gone when I use it via the Roku app. I am stunned !!!

I’ve only used this setup for an hour, but so far no problems. The live TV grid runs fast, and everything seems to work.

Of course this is how the Dual HDMI should have worked out of the box, but as it stands now I will return the Dual Lite unopened if things continue as they are.

I’ll update after more use, but if you are having problems with the Dual HDMI you may want to buy a $49 Roku Ultra LT and use the HDMI unit that way.

Glad it’s working for you! I have used a Roku for some time and am generally happy with its performance and interface, and also being able to do most things with just one (Roku) remote.

I don’t have an HDMI unit, but if I ever get one I’ll probably run it just like you described. In fact, after the initial setup, I don’t think I’d even leave it [the Tablo HDMI] connected to my TV! Just run exclusively through my Roku.

Wasn’t this part of the function from the beginning for the HDMI units? 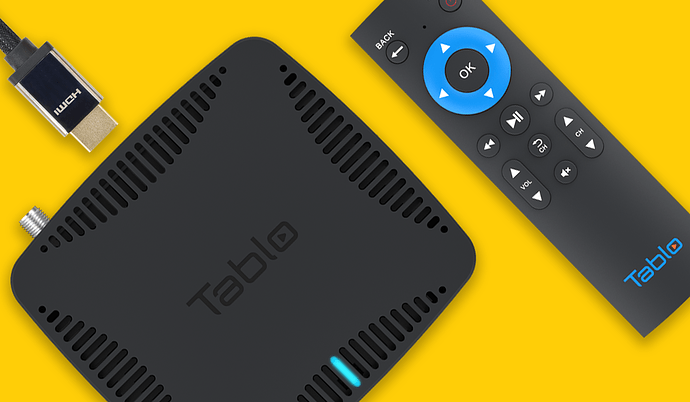 Perhaps, but the materials on the website say “no” and “yes”, and IMHO, “no” is the prevailing message.

Do any of the other in-home streaming devices always force the HDMI unit to transcode? That is, only the HDMI connection will support the uncompressed video? If streaming to another device does always cause transcoding, then it would seem that just using a Network DVR would be the way to go anyway. But it would be kind of nice if you could still stream the raw, uncompressed video feed to other devices within your own home network.

I am pretty sure that the HDMI unit does not transcode the video when sending to the Roku, straight MPEG-2. Hence the warning from Tablo that your local network must be very robust.

This is correct. My problem are things like the Tablo comparison chart, which says DO NOT choose the HDMI solutions if watching on more than one TV is the goal (that’s not true in certain cases). Even weirder, to make non-transoded streaming work requires good end device handling and a good network, and the chart says the HDMI units are for POOR NETWORK devices. I mean, I understand what is meant, but I bet it will be confusing for most people. 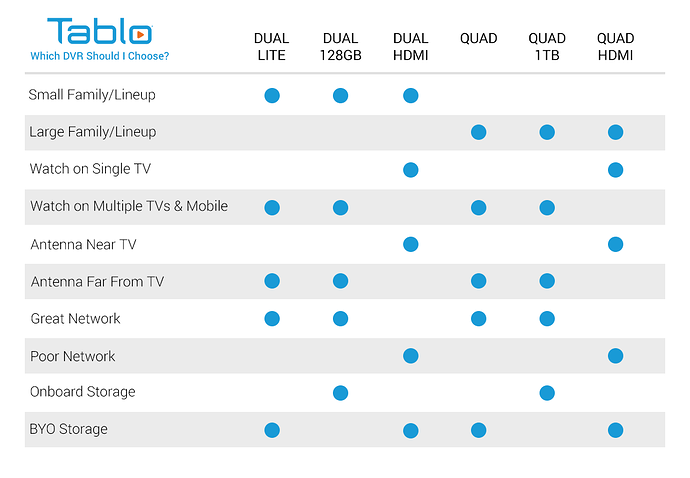 That is a little bit misleading. With no transcoding being the case, this makes itself a bit of a viable silicone dust alternative, since you don’t necessarily have to be tethered to a router and or television.

But don’t thing like SD Prime 4K (etc) have Plex plugins… which means transcode is possible? (of course, requires Plex).

If your network is robust enough, you can indeed stream full quality MPEG2 content to your Roku, Android TV or Fire TV devices. The device does not do any transcoding.

Well that is very interesting. So is there any advantage to using a dual lite over a dual HDMI if I’m going to be streaming ?

I wish I knew about this a year ago, it would have saved me a lot of frustration.

A network Tablo like the Dual Lite is able to stream to a much wider array of devices, like computers, mobile devices, as well as Apple TV.

Finally, they are able to use the Tablo Connect feature to do out-of-home streaming.

A network Tablo like the Dual Lite is able to stream to a much wider array of devices, like computers, mobile devices, as well as Apple TV.

…and more simultaneous streams, up to 6 - without paying any fees, while you need a Tablo TV Guide Data Subscriptions | Over The Air (OTA) DVR | Tablo to stream from an HDMI Tablo (in your own house over your own network).

An HDMI can connect 2 - Dual or 4 - Quad, but it doesn’t explicitly say number of streams (since there are limitations to connecting devices).

To sum this all up, when I purchased my Dual HDMI I did not understand (or care) about networking options with a Tablo. I was only interested in hooking up my Tablo to a single TV, and the HDMI unit fit the bill.

I quickly found that there are major problems with the HDMI unit when used as advertised.

I remember seeing that article in the past, but I didn’t pay any attention to it as it didn’t interest me.

Now I get it, and I am ONLY streaming. I’m not using the HDMI out signal at all. When streaming, I haven’t found any problems using the Tablo. Everything seems to work smoothly and I haven’t stumbled upon a single bug yet. Fingers crossed that my good fortune continues.

I know that Tablo is tired of hearing me whine about the Dual HDMI, and maybe everybody else is also, but I think it’s criminal that the HDMI works so very poorly, and the only way that it is worth keeping is to use as a streaming device, which isn’t it’s primary function.

My hope is that this cobbled setup will serve me until ATSC 3.0 arrives where I live.