With Black Friday and Cyber Monday approaching, I’m looking at USB RAID Enclosures to replace my current WD Elements drive. I see that external drives are still not recommended, but I’m big into redundancy. I’d be going for a dual drive, RAID 1 setup.

Is it really so bad not to use the officially recommended drive? Is anyone using something similar?

Is it really so bad not to use the officially recommended drive?

I guess it’s “use at your own risk”. I"ve been using a WD-EZRX Green3TB in a Sabrent USB 2.0 TO SATA/SATA II Aluminum Enclosure With Cooling Fan without issue. I"ve had each for some time, and felt comfortable with their reliability. I suspect with all the generic boxes and variables with combinations of drives it’s too much to track, officially.

So, although I"m not going to recommend it, officially. If you think you have a reliable setup, yes, they do work in my experience.
Technically, what do you think is inside the ‘pre-build’ boxes? You can buy a WD elements or easystore enclosure only on ebay and add your own drive.

The Tablo can only support USB 2.0. Of course USB 3.0 is backward compatible. I would expect that if the array is meant to work at USB 3.0 speeds the USB 2.0 performance should be pretty good. Unfortunately I’ve been wrong before.

I would also prefer a RAID array for redundancy so please keep us posted on how it works for you. Just keep in mind the speed and space of a RAID 1 array is equal to the smallest, slowest disk.

The 3.5" enclosure I first checked out had some worrying reviews so I kept looking.

Of course, it all depends on what happens during Black Friday and Cyber Monday.

That enclosure says it only supports 2.5" drives. That will end up costing more in the end. It’s small footprint also suggest a small fan that will require a higher RPM and probably be louder. With that I would take the placement of the Tablo into consideration. If it’s near where you watch TV look through the reviews to see if others have complained about fan noise. It has external power which is a huge plus.

2.5” drives for RAID 1, I’d be worried about longevity of those drives.

Thought I’d give an update since it’s almost a year, and I’m only now encountering an issue.

I went with that MiniPro. It has bright LED’s, but that not a problem for me since it’s out of sight. I don’t see a problem with 2.5" since the USB HDD I was using before was a WD Elements Portable, which uses a 2.5". That’s what I was using before for several years with no issues.

A few days ago, I encounted an issue where the Tablo would say there’s no storage attached mid prime time recording. According to a Tablo support rep, the issue is HDD related and my Tablo is running fine. It was suggested trying a new USB cable to see if that helps. I plugged the enclosure to my PC to check the HDD’s health, and there were no errors reported.

Interesting. So you have two 2.5" drives running in RAID1?

Did replacing the USB cable with a new one help?

Yeah, that way if one fails, I don’t lose all my recordings. Before I was using a WD Elements Portable, with no redundancy. The Tablo detectes the enclosure no problem.

The MiniPro uses a USB 3.1 Gen 2 Type C to A cable, of which I only have the one. The replacement should be here tomorrow.

I also use a Sabrent enclosure and have since buying my Tablo over a year ago with zero problems.

Off Topic: What would be nice but never going to happen is if the Tablo would use a remote file share or iSCSI. Wonder if anyone makes a device that maps a file share to a USB emulated drive…hmm…

I’ve often asked for similar sort of bridging devices. And while in some cases, there have been such bridging devices, I don’t think there is one in this case (I’ve never found one).

Edit: I should probably explain, as there are certaining “NAS” devices that can be direct attached via USB. I was talking something more “generic” (without the whole NAS baggage).

I’ve considered trying to build one using a Raspberry PI but I really don’t know how well it would work.

A few days ago, I encounted an issue where the Tablo would say there’s no storage attached mid prime time recording.

I’ve only experienced this issue when I have a power outage and even then it isn’t every time. A reboot usually does the trick. An uninterruptible power supply might help. I’ve been thinking of adding one to my own setup. You’ve also got me thinking about a raid set up for my Tablo.

I’m glad to hear it’s working. I was also thinking about automatically ripping files from my Tablo since I’ve been playing with Plex. Then the Tablo can just do the recording and all my media can be in one place.

So even with a new cable, I woke up this morning to the no storage error. Turns out it was the USB port on the Tablo that was going bad. Replugging the same port and rebooting did nothing. Once I tried the second USB port, it was immediately detected by Tablo.

Just to confirm, on the back of your enclosure it is selected to be powered by the DC input? And not use the USB bus? See photo below for the switch I am referring to. 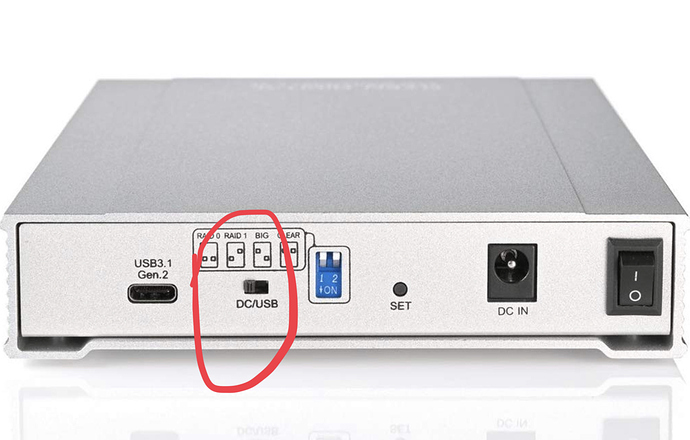 Yep, the switch is set to DC and it’s plugged into my UPS.

Have Tablo Support check your logs then, see if it was a faulty USB port. The newer Tablos only have 1 USB port so a problem like this would suck for them.

Yeah, I saw that. I went ahead and grabbed a new Quad off Amazon since my 4-tuner is pretty ancient by this point. Maybe the newer ones won’t be as effected by heat since it looks to have a bit more ventilation.

I would still put it in a well ventilated area.