I’m getting ready to get a new USB drive. Is there a size limit that I have to stay under? What is everyone else using? I filled up a 1000 gigabytes and now have to learn how to move this to a new drive.

I filled up a 1000 gigabytes and now have to learn how to move this to a new drive.

This is not officially supported by Tablo. You can search the forums for unofficial ways to transfer recordings from an old HDD to a new HDD.

I think the middle of this page says 8TB. I think someone ask about large drives. But how long would take for tablo testing to use a 4-tuner to fill one up to see what happens.

Tablo DVR Recording Storage: How Much Do I Need?

Are you a DVR hoarder or a DVR neatnik? Either way, Tablo has the DVR recording storage you need.

I believe @TabloTV stated that 10TB or larger should work, but they’ve only tested 8TB so that’s what the website says.

I’m fairly sure that some users here have used drives larger than 8TB, but the official posted limit is 8TB.

Further reading suggest there’s no technical reason for limitation. As noted, time to mass record for testing exbibytes of storage is time consuming

Once you get into REALLY large drives, they can get a bit slower to wake up which is something to keep in mind.

And there’s no way you could watch all of the recordings on an 8TB drive in a year and not have your butt start to fuse with your couch.

Hoarders don’t seem to care. It’s easy to prove that they could never view all of crap they could record on a 10TB drive.

Of course the user might decide to record nothing but 30 minute shows broadcast in 480I. And when the drive fills up with 20,000 recordings how long would it take to load all of that Recording metadata into a Roku ultra. Let alone that the metadata would probably not fit in memory.

Of course a 4-tuners recording 30 minute episodes 24 hours a day would probably take 104 days to fill up the disk.

What about SSD drives?

What about them? They’ll work, but you’re not going to get any benefit from the speed. The USB interface on the Tablo isn’t that fast. 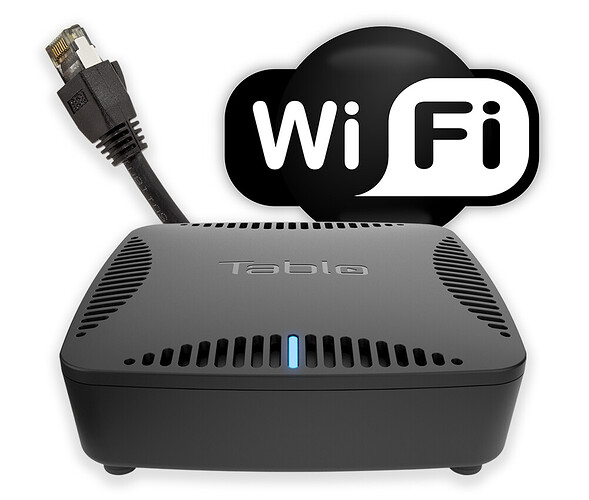 Tablo offers both network-connected and TV-connected Over-the-Air DVRs that can record and display gorgeous HDTV content from your antenna. Each have slightly different capabilities, setup requirements, and steps.

That’s what about them. I was wondering if there would be a benefit as far as speed. That answers my question. Thanks.

Well, considering this is a drive SIZE thread, I wasn’t sure that drive SPEED was the question.

The Tablo slows down noticeably when you have too many recordings. I’m not sure a drive over 8 or 10 TB would make sense for the standard Tablo devices. Even though they would likely function fine the user experience would degrade. The exception might be for a data hoarder or “archivest”.

The Tablo slows down noticeably when you have too many recordings

This is way so vaguely generalized

Does number of recordings impact streaming? Loading the recordings? Episodes? Via multiple devices/app simultaneously or individually? Too many ??? Wired or WiFi network? or HDIM connected?

My view, with out backing up, a digital hoarder or archivist risk grave disappointment using a [somewhat] proprietary device. (of course there’s always risk involved, but if your entire life’s collection is dependent upon a single method…)

After a number of years hinting that tablo is a DVR system and not a media library system and explaining that there are tools to extact their horde of 1970’s show to a NAS with redundancy, maybe it would easier to wait for the tablo disk to crash and die.

And that would solve any problem of the disk running slower as it gets full.

The slowness is mainly noticeable on loading the app and starting a show. It’s very difficult to say whether it has any effect on recording failures but I suspect that’s minimal if at all. You wouldn’t likely notice a recording starting a little late. You’d never know if it was the Tablo or the network at fault. I don’t think it hurts playback after the initial load time. At any rate I just think it’s something to take into account if you plan on getting a very large hard drive.

My view, with out backing up, a digital hoarder or archivist risk grave disappointment using a [somewhat] proprietary device. (of course there’s always risk involved, but if your entire life’s collection is dependent upon a single method…)

There are plenty of good tools to pull the data off so I don’t think the proprietary nature is an issue. It’s way more open then most mainstream DVRs. I applaud Nuvyo for that!

There are plenty of good tools to pull the data off so I don’t think the proprietary nature is an issue.

…this would negate using a larger drive with a tablo, wouldn’t it? and then you would have a speed impact.

My Tablo Quad only has a 750GB, the Duals only had 320GBs each… never fill since my digital hoarding archiving is stored on multiple drives viewable ac cross multiple platforms (if necessary). Again, that’s me, it’s not everyone’s perspective. Zippy kind of sums it up, DVR isn’t really media library system.

…this would negate using a larger drive with a tablo, wouldn’t it? and then you would have a speed impact.

It negates the necessity but not the utility.

In my case, we watch a lot of PBS. Shows like Nova and Nature air the same episodes over and over again, especially during pledge drives. Since Tablo doesn’t keep track of what shows you’ve already recorded, I just leave them on the drive so I don’t rerecord them and have my wife get mad because we’ve already seen it.
Happy wife, happy life.