I tried to upgrade from firmware 2.2.2 to 2.2.8 from my Android phone. The software was downloaded, but during installation the connection was lost. I can’t reconnect and when I try to access the Tablo from Roku 3 it hangs. I seem dead in the water.

The reason I looked for a firmware update was that my 2GB harddrive - which was empty - was reported by Tablo to have 0MB free.

All in all I’m feeling unhappy.

@permutations - Definitely place a ticket with support. This is certainly an odd occurrence and I’d like to have them check it out and get you back up & running: http://support.tablotv.com/hc/en-us/requests/new

I was able to get my Tablo going again, thank goodness. After several failed attempts to connect, my phone asked if I’d like to reset the connection. I said yes, and then it spent a very long time synching. After that, my Tablo info appeared on my phone, but the Tablo app still looked hung on the TV. At this point, I randomly decided to update the guide - a decision I immediately regretted because it took so long. I wanted to reboot the Tablo and then the Roku, but I couldn’t reboot the Tablo while the guide was updating, so I thought I’d see if just rebooting the Roku helped. I rebooted the Roku (unplugged it and plugged it in again) then navigated back to the Tablo app. Wonder of wonders, it helped. The hanging screen was there for a second, then poof - the app loaded properly and v2.2.8 of the firmware was installed. I notice less of a lag loading the guide with this version.

Also, happily, my hard disk space available is showing correctly again (versus 0MB available, as it said before the firmware update, though I have a 2GB disk and there were no recorded programs). Do you know why the error occurred in the first place? Was it related to v2.2.2 of the firmware, or something else? Might it happen again? I scheduled some programs to record, so that would be a problem now.

What happens when the hard disk runs out of space? Is there any warning? Is there any way to estimate the required space the scheduled programs will take (e.g. x MB per y hours of programming)? That would be a nice feature in the “Scheduled” section of the app.

@permutations - Some hard drives have had issues with disconnection which is why we recommend some specific drives that we know don’t have this problem. Most drives are OK, but there are a few that might be great for storing photos but are terrible for DVR storage.

However, when Tablo boots up, we do give a bit of delay for the boot to stabilize before connecting the drive so you may have seen that detail before the storage was mounted.

Some hard drives have had issues with disconnection which is why we recommend some specific drives that we know don’t have this problem. Most drives are OK, but there are a few that might be great for storing photos but are terrible for DVR storage.

I bought the exact make and model hard drive that I read in an article about the Tablo. I usually research everything to death, but this one time I was lazy (so of course, it bit me). Where is your list of hard drives that work well with DVRs? This was not a boot-up issue. It was stuck at 0 until I updated the firmware. My hard drive is:

Is that one a problem?

That’s not an ideal solution. I could over-record without realizing it, and this option would delete shows I never got a chance to watch. I’d rather make a deliberate choice of what to record and what to skip if I don’t have space for everything.

Would it be feasible to add a space estimate to the “Scheduled programs” section, and/or add a warning if I may be approaching the danger zone? I guess it might be hard to compute, with programs being added and deleted all the time. It would help me to know how much space each hour of recording takes, more or less. Can you tell me that?

Your model is also mentioned favourably in this forum post of good/bad drives: 'Tested' Hard Drives

That’s a relief. No idea why I had the problem then. Seems fine now.

Connect the drive to a computer and update the firmware on it using the WD Utility.

Hmmm… That sounds wise, but tedious. Have you heard of cases where this really was an issue (looking for an out).

I just scheduled a bunch of stuff to record. I’d have to look and see when that is to make sure I’m not screwing any of that up. (((sigh)))

Yes I’ve heard of it solving many problems. Force it to install the same version even, the re-install has solved issues for some too.

The WD firmware update utility is for an older version of the WD Elements drive than the one I have. There are no firmware updates for my hard drive.

I’ll just hope it was a one-off.

What is the model number of the WD Elements drive you have?

Did you try the WD Universal Firmware Updater? See below. 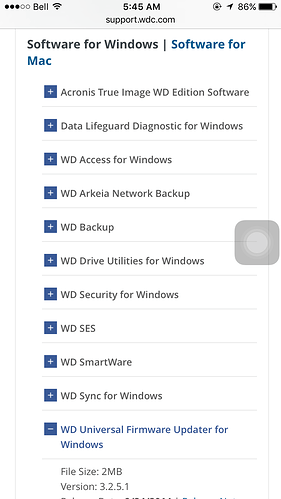 His hard drive is as mentioned above:

My hard drive is:

As AceConrad said, my hard drive is:

I read the installation instructions for the universal upgrade utility, and they say it is only compatible with WD Elements hard drives that end with -05, which mine does not. The actual marking on the bottom of the drive is -0B for some reason, but when I entered the serial number on the wd.com site, it said “thanks for registering the WDBU6Y0020BBK-NESN drive”. Either way, it doesn’t end with -05.

I then went to the product page for my specific hard drive and looked for updated drivers. There were none listed. A note below the list said that if your product was not on the list, then there were no updates for it.

My apologies for the assumption!

No apology necessary. I appreciate that you took the time to respond and gave me an idea to look into.

I understand the release notes say only -05 but I swear I have upgraded other drives with it, I believe the utility can be used for the WD Elements line.

Did you actually download and run the utility with the drive connected to the computer? What did it report back?

I’d be scared to do that. To ignore a requirement like that is asking for trouble. I don’t want to trash my brand new hard drive. Also, I haven’t had any further problems. I’ve been recording shows, and everything is working fine.

I wrote to WD support to ask if there is a firmware update for my specific model.