I’m sure that this worked before. I am using a Netgear ac1200 wifi extender to get connection to far reaching parts of the house. The devices that are using that wifi network are unable to find the tablotv. They connect when i change the device to use the actual network coming from actual router.
is there some OTHER setting I can change so devices can find the TabloTV? Firmware 2.2.16
BTW Tablo is wired to the router.

They need to be on the same subnet as the Tablo.
That’s all my caffeine deprived brain came up with.

Tablo has to be on the same network (SSID) as the device wishing to access it. You can change the Netgear SSID to be the same as your “main” SSID - that should work. I have that setup with multiple routers in my house.

Thank You for the info. Follow up question. if you have the SSID the same, how do you know which one you’re actually on? when i setup the extender, it suggested using the same name, with a few more characters…

Thank You for the info. Follow up question. if you have the SSID the same, how do you know which one you’re actually on? when i setup the extender, it suggested using the same name, with a few more characters…

Apologies for my tardy response. IMHO, you don’t have to know whether you are on one or the other networks. The 802.11x protocols all have features that let them choose the strongest signal on the same SSID. network. I take care to “arrange” the channels so they don’t all broadcast on the same channel id and thus conflict with one another. Some mobile devices that can’t handle moving from one to the other experience a “drop” when they transition from one transmitter to the other. For the most part it’s seamless. Things like ROKU that are stationary will not experience any issues.

Here are some screenshots from a Wifi Analysis tool on my mobile phone that shows the two networks with the same SSID - one image is of the 2.4 GHz signal, and the other (which, as I took it, I realized are overlapping), are of the 5.0 GHz signal. - I guess I’m going to have to pull out the old toolbox and tell one of those 5 GHz signals to scoot over to some other frequency. 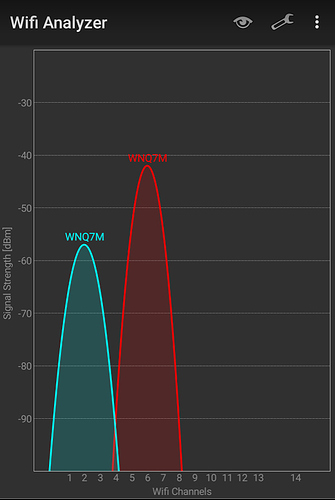 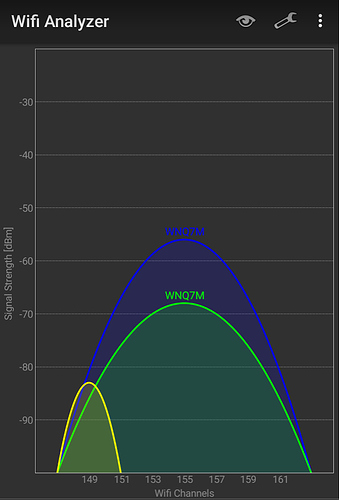 I have a NEW weird thing. We bought a Roku TV for the kitchen, it’s using the SSID of the extended wifi… and it connects to the Tablo with out a problem. Is that weird? something unique about the TV vs a Roku Stick? I JUST added Tablo App to another Tablet running Android, made sure that the device was on the main network, launched the App and it found the Tablo device. i then changed the network to the the extension, opened the App and it found the device. Something is different. just not sure what.