I’m desperately trying to save mega $$$ by getting rid of b(h)ell satellite, so bought an antenna which I mounted on top of the house, a TABLO 4-tuner DVR and have been busy optimizing my wifi network at the same time so TABLO can be enjoyed by various devices in various places. Am a newbie at this.

My neighbor in Hawkesbury (4 km away) gets like 19 channels, and I only get like 5. What’s worse is that the one my wife insists we get before cutting the cable is TVA, and I don’t see it after pointing my antenna all over the place. Has anyone had any success getting TVA (french) OTA?

You can also try asking at this OTA forum which has a number of such areas on the Ontario\Quebec border:

TVA would be at about 100 miles from you (either the Montreal or Gatineau stations). Usually 60 to 80 miles is the practical limit for OTA depending upon the terrain.

Also what antenna do you have? TVA is real channel 10 from Montreal which is VHF. Is your antenna VHF capable?

The key question is what kind and size of antenna does your neighbour have? Given that the channel you’re interested in is so far away.

I’m including a picture of the antenna. I bought it at Walmart since they’re easy to return if unsatisfactory. It’s the 2nd one I try. 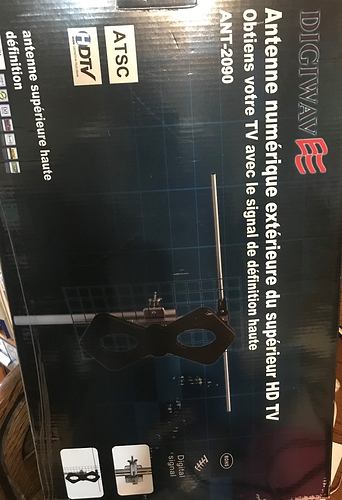 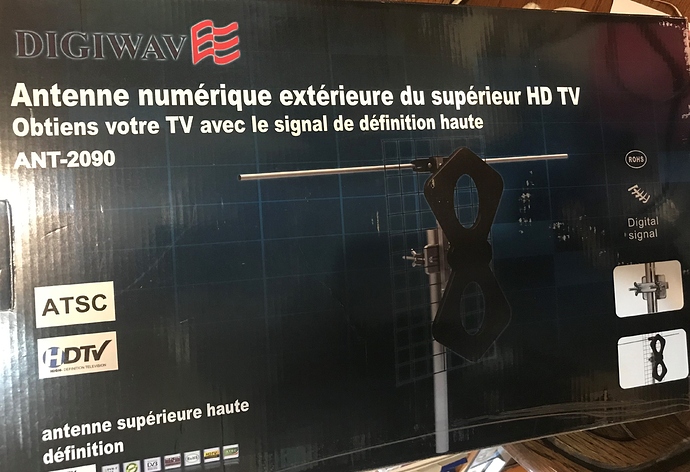 Thanks for the reply, Mark. I will definitely go try my luck on the OTA forum. I suspected maybe because I was less high that my neighbor, I believe I have he same orientation and antenna.

Do you think boosters have a big impact? I have a small one, not sure if my neighbor does. FWIW, I uploaded pictures of my antenna box elsewhere on this thread.

It appears you get TV stations from two opposite directions at about 100 degrees (50 miles) and 270 (60 miles). They are all coming towards you at 2-edge indirectly (which is not line-of-sight). Four of them are VHF. Very difficult reception area. BTW my earlier 100 mile distance was off.

Did you install the reflector with the antenna because that may be blocking those stations coming from one direction?

The marketing says this antenna is valid for 70 miles and it seems as if Hawkesbury is within that range. However at 50-60 miles, you will need a preamp.

This antenna says VHF reception is possible because it has a VHF attachment.

Eureka! Thinking outside of the box here (pun intended), it occurred to me that I could connect my Talo to my neighbor’s prolific antenna setup, re-scan, which I did and I can get TVA on my Tablo there, no surprise. Furthermore, since the lucky stiff has fiber to the home which I clocked at 300/300, I went back to my place with a puny (but acceptable) 25/10 internet access and was able to remotely connect to and watch TVA on my iPhone. Wonderful start/progress! Can you think of any gotchas/disadvantages with me set up that way?

PS: Waiting for new TV Guide updates for all the channels (including 3 american ones) he is receiving.

Is your neighbor aware that your use of his network from the Tablo will add data usage for him?

Can you think of any gotchas/disadvantages

Well, as Mark stated…there is the internet usage, but one of the primary disadvantages is the fact that periodically, you’ll need to take your client, in this case, your phone, back over to their house, connect to their network, and re-sync your Tablo client with the Tablo box, as there are ready reports of people needing to do that when consistently viewing remote tablos.

He’s got unlimited data I believe, but I also installed a laptop on his network I can TeamViewer into to administer his router until I’m sure all is well. I was particularly pleased with the uPnP aspect of the Tablo which meant I had nothing to do to it (the router) to make it pass trough after I followed the procedure in the Tablo settings.

Congratulations, very interesting solution. I once thought of sharing my antenna with my neighbor since his reception was crap.

Is this solution just for TVA or all channels?

Whatever he can get I get, so he gets TVA and a bunch of other channels, even 57.x US ones.
And CBC french and English of course and more I will post in that website that says who gets what where which I havent been to yet.