So the photos (or whatever they are called) for each recorded show will sometimes ‘blank’ out. The title of the show is still there, but the photo isn’t, almost like it was a manual recording (it’s not). Then next time, maybe it is there. I see this happening regularly on Good Morning America, but there are others too. Any idea why sometimes the photo is there, but sometimes not?

No idea why but I see the same thing for a handful of programs every day.

What client? I seem to recall some discussion of older clients with low memory purging images. Like older Roku boxes. Depends on how many channels you have enabled, which will determine how many show icons it’s trying to save.

Yeah, could be it… I have a Roku Ultra. The thing even says to install a micro sd card to avoid buffering, but there’s no micro sd card slot that I can see.
Seems kinda weird though that it’s the same show(s) that get blanked out.

I see it even with Windows 10 , Firefox, iPhone app. Doesn’t seem to be related to client from what I can tell.

It depends on what model of Roku Ultra you have. Mine does have a micro SD card slot and it is located under the HDMI socket, so it is only easily accessible when the HDMI cable is not connected. Some of the newer Ultra models apparently eliminated the micro SD card slot.

Same here. I don’t have that many channels, so I don’t understand why it’s doing this.

If you make a note of the shows you’re seeing this on and when and let support know we can investigate further: www.tablotv.com/support/#contact

Sorry for the late reply. It’s pretty random, sometimes the pics are there, sometimes not. Good Morning America seems to be one that’s pretty consistent with the on/off pics.

I just got a Roku soundbar to replace the ultra. Still have these same issues.

Feel free to send our team some examples (screenshots/images are quite helpful), and we can take a closer look.

Honestly there are so many that trying to track down specific shows would take a very long time.

Here’s a screenshot from the Windows 10 app. Sometimes some of these movies show artwork many times not. Very random. I could scroll through the entire movies page by page and every point along the way there will be a few like this 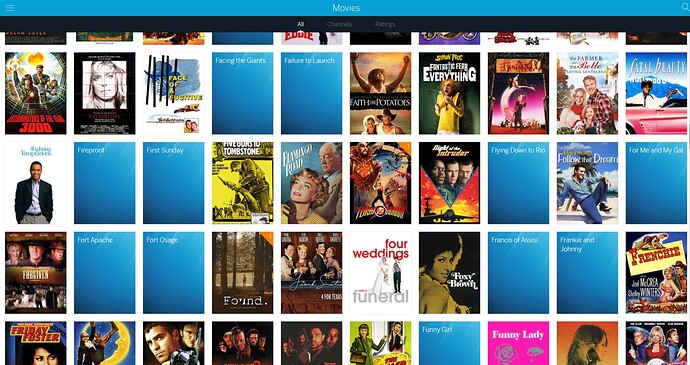 What I find interesting, is if I click on a recording that doesn’t have art (on my Roku), there is an image that gets displayed in the background under the show’s description, etc.

So there is art for a lot of these, it just isn’t being used/displayed. I’m guessing this is related to the previous firmware update involving art and size mismatches.

I’d rather see the wrong aspect ratio art, than nothing at all.

Haven’t there been a number of threads on the missing cover art. It seems the last thread might have been in october.

Perhaps I’m wrong but I thought that the problems with the cover art were supposed to be resolved with the most recent updates? I haven’t yet seen more than 60% at any given time! I currently have exactly 105 recordings appearing in my “all” recordings folder. Most of which are current, mainstream shows. 35 have no cover art! That’s over 30%! It varies from time to time. Sometimes even from one day to the next. Some reappear, some disappear. Some never appear. It’s a guessing game! Hence …

This is from a 2-tuner OG model. This is the WEB app but The Black Pack and CMA Country Christmas have never showed up on either the WEB or Rou app. The other missing thumbnails may or may not appear. On Roku current only Sherlock Holmes is missing but 2 hours ago Pandorum was also missing. All the other ones missing from the WEB app exist on Roku.

There is nothing new. This has been going on for a while. It’s much worse on a dual64. 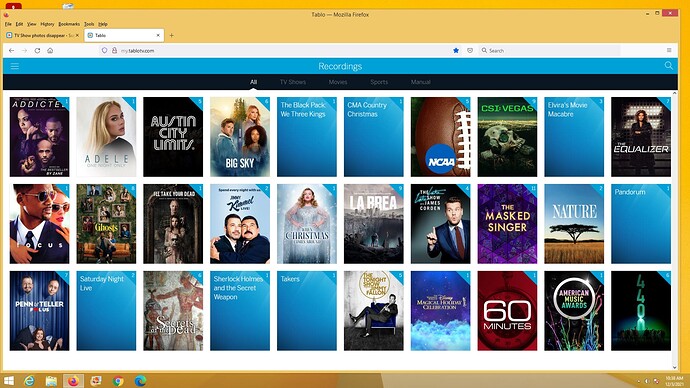 Exactly the kind of stuff I’m seeing. Tablo asking for screenshots seems pretty useless as it is so random on/off that seeing the screen is of little use. Except to confirm it’s happening I suppose. I can confirm that when I select a 'blue non-art" show, I also see the artwork ‘inside’ the show, which I agree, is pretty weird. Appears to be widespread. It would be nice if Tablo would work on a global fix.

VegasSteve and zippy, wondering if you upgraded to the latest firmware whether or not you saw any improvements? The problem has all but disappeared for me other than some local programs which I would not expect to have art.