Unfortunately, the designers are too stupid to take advantage if the LAN connection unlike my amplifier, TV, etc.

What do you mean? All Tablo units have an Ethernet port.

“To watch Tablo content on additional TVs within your home, you’ll need an active TV Guide Data Service subscription, a strong home WiFi network and one of these: 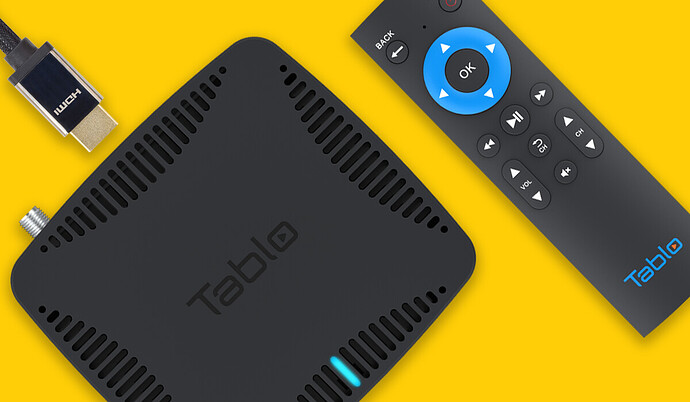 What do you mean? All Tablo units have an Ethernet port.

…every model has a physical RJ45.

Which one do you believe does not? Click on any/all of these, DVRs - in the list of features each and everyone:

For the best experience, connect your Tablo and/or your streaming devices/Smart TVs to your network via Ethernet where possible.

So, as with tablo, they claim one thing, and then tell you something else? You need WiFi… but yet your don’t?

Apparently they disabled the other ports despite while claiming you could watch shows on other devices. They lied. Nope, I have tried ever app like TabloRipper, OTS2go, etc. I could find and none work. Not a single app or PC application work with this piece of junk, including their own app on any mobile device. None work! You need a proprietary device like Roku. Their statement is pure fraud. I wish I never bought this piece of junk. Nothing can use it.

Did you ever responded to whether or not you had an active TV Guide Data Service subscription.

Some details might be helpful because while I don’t doubt you are encountering issues, throwing around comments like ‘junk’ when things are obviously working for plenty of other people really points more toward something in your configuration or with a piece of your equipment vs an overall problem with the Tablo device.

Apparently they disabled the other ports despite while claiming you could watch shows on other devices.

If you just want to vent through various rants - I get it. But if you’re having issues and making “claims” I believe you’re mistaken

Apparently they disabled the other ports despite while claiming you could watch shows on other devices.

You do realize you need a guide subscription to watch on other devices? The network port wouldn’t be disabled since networking is still needed for this device even without other devices. Obviously the USB is mandatory along with the HDMI and F-connector… so what “other ports”?

Nope, I have tried ever app like TabloRipper, OTS2go, etc. I could find and none work. Not a single app or PC application work with this piece of junk, including their own app on any mobile device.

Quick update… Our CEO just tested Tablo Ripper and it worked as expected. As long as your playback device can decode MPEG2, it should be A-OK. (CC @cycleJ)

Although I haven’t seen reports of any other users using Tablo Ripper with the HDMI Tablo or any other 3rd party apps – there is a highly unlikely possibility the CEO has special access to the device to do what ever they want. A generalization, many of these apps access the tablo the same, so others should work …as long as you don’t need CEO privileges

You need a proprietary device like Roku. Their statement is pure fraud.

I agree it’s incorrect for them to refer to Roku as a non-proprietary device in their announcement. It had been clarified, in context with competitors, you don’t need to but their products. But as it reads, it’s misleading.

I wish I never bought this piece of junk

If you’ve figured this out in less that 30 days from purchasing it?

as a last resort have you ask-tablo - contacted support? Realized they do not support 3rd part apps, but the developer and many users have a lot to offer, if you’re sincere.

I can confirm the NVidia Shield (mine is the Pro Game Edition, which has doubled in price since I bought it, with free online games, etc.) work fine over LAN with the Tablo Dual HDMI. It doe NOT need WiFi like Tablo says is required for Roku devices. It looks and operates just like the native output via HDMI to a TV. Sorry, but I had to completely reorganize all of my media center devices. Set up USP fir the Tablo and HD, etc.

It doe NOT need WiFi like Tablo says is required for Roku devices.

The Roku devices do not need WiFi either, they can be hard wired and stream from the Tablo DUAL HDMI.

I finally got my NVidia Shield back up. It uses LAN too.

The NVidia Shield connect via LAN, there is no excuse why other device can not.

The Roku Express ($25), Premiere ($35), Streaming Stick + ($47), do not have Ethernet, only the $93 Ultra does, the means you spend more on Rokus since the Tablo is so limited. There is model called Ultra LT for only $70 that I have to research… …OK, it comes without a USB port and the JBL wired earbuds but doe come with a cheaper set you probably will not use unless you have very bad hearing anyway.

How much does an NVIDIA Shield cost? They ain’t cheap.

Might not be cheap (Nvidia Shield), but perhaps more versatile. I personally think it’s the wrong choice for Tablo though. There’s a part of me that’s always wanted to own one, but I’ve bought similar temporal expensive technologies in the past… mostly heartache.

The Shield TV was a GREAT device for us. We have the OG 2015 model and it was just finally starting to show it’s age late last year. For what it offered when it came out, and the price, probably the best tech purchase we’ve made in a while. Even the OG models continue to get major updates, and we used it as a Plex server as well.

Having said that, once it started having issues the Chromecast with Google TV was a couple of weeks away and for 1/4 of the price it does everything we need these days, particularly since I moved the Plex server to a Pi.

It kick @$$ but it overkill for a playback device. The Roku Ultra or Ultra are around $93 and $70, currently and have LAN and a better WiFi then their cheaper models. One good thing, NO MENU LAGS when I use the NVidia Shield Pro. I got mine about a year ago when the gaming edition came out. I paid $190 but it is now $360 without the on-line games.

With that said, I never paid more than $50 for my Ultras. They do go on sale a lot.

I guess I will wait. I only need one since I have the NVidia Shield already. Lowest right now is $93 on Amazon. I did found LT is missing more than I thought but if I wait maybe I can get the other one, since I am in no hurry. I would just like access to all my files the Tablo Dual HDMI is creating. They claim all current Roku models are supported but some people are having problems getting them to connect to the Tablo Dual HDMI unlike the Quads. Heck, the Roku Ultra is more powerful then the Tablo when it comes to playback?

I can not get my Logitech Harmony Hub to find the Tablo DVR, it has found the Lutron Hub but keeps failing right after I log in. I suspect until I can get it to work it will always find it first. One person said they were able to find it but I cannot conform it.

I suppose you do not have the Logitech Harmony Hub to see if it can find the Roku Ultra.

Who is reporting this? I haven’t seen any threads about the Roku not being able to connect to the Tablo DUAL HDMI, you just need to have a paid valid subscription to do in house streaming.