I recently bought a (55") Toshiba Fire Edition TV, where the Fire UI is baked into the TV. The first (great) thing I realized on initial setup, is that they have an Excellent OTA Channel guide built right in … and, that you can set it to boot up to OTA Guide & Channels (rather than Fire UI) whenever you turn it on.

The OTA Channel Guide / Interface is absolutely beautiful. Much like Tablo’s, but the guide info & graphics load instantly. The tuner pulls in everything my Tablo does and everything my Primary TV (LG OLED) as well. While watching one channel, you can click down on the Remote Toggle and scroll through a rolling carousel of Thumbnails for other channels, select one for instant change. Great feature.

The Tablo “Preview” app for Fire OS works beautifully, as it does on my Fire TV Box and Fire Stick. As this is not my primary television, I’ve been mostly exploring the non-Tablo aspects, and the (surprising) excellent OTA features. There’s even a short-cut for OTA on the Remote.

One problem, it’s the Remote. It is specifically made for this specific television, and because there is no power button on the TV itself … if the remote goes, so goes the TV. You can not find or buy a replacement remote, not on Amazon, not on Toshiba site, nor anywhere else. So if your Remote goes, so goes your TV.

What I’ve done to remedy this (just in case), is to buy a Replacement Remote for Fire Stick (which has no power button) and a SideClick for Fire Stick. Programed these together and put them in a drawer, if ever needed.

This is not going to measure up to your premium 4K television(s), not exactly your deepest HDR experience, but for the Price-to-Performance ratio, Fantastic. I bet the Amazon DVR features (currently in development?) will be integrated nicely into these TVs.

I, too, bought a Fire Edition Toshiba (50 inch here) and definitely was surprised at how much I liked the antenna connection and interface.

I didn’t even think about the fact that there was no way to buy a replacement remote. Good idea on using a sideclick (I’ve got one that isn’t used anymore).

I also noticed that there is the ability to pause and resume live OTA tv, which made me think there was a dvr in the works.

Yes, you can pause (and rewind) live TV and I had the same thoughts. This has been reinforced by rumors and leaks, so yes there’s something in the works. 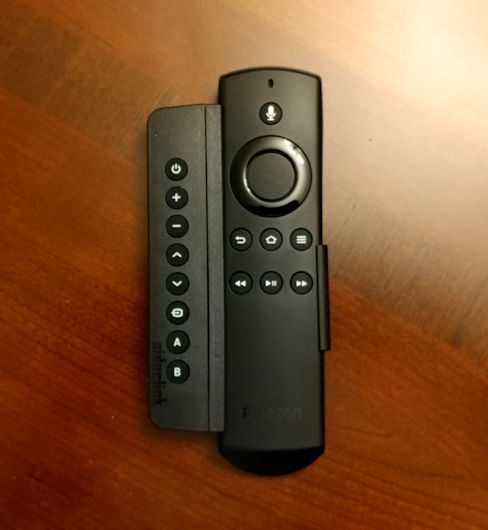 I configured this a few days after setting up the Fire TV itself. As a side benefit, I set up the volume controls to work with my sound bar. Once paired & configured, put it away in a drawer for emergency use.

Before I received the Sideclick (took two days), I configured a cheap (5-dollar) remote that was laying around to turn the TV on and off. Relieved when the sideclick arrived and fortunately, did not sit or step on the original remote before then (knock wood).

Found this at Best Buy, fantastic! 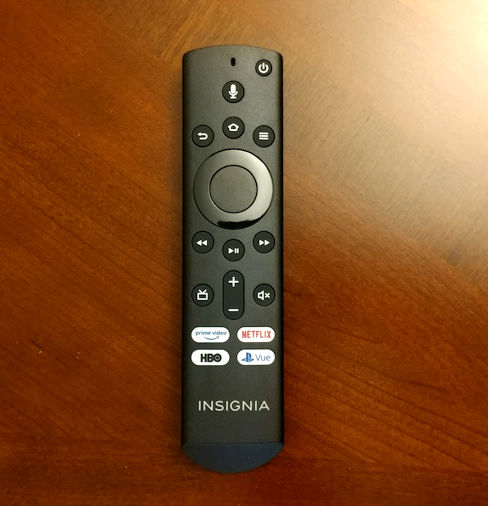 It’s the exact same remote used for the Toshiba Fire Edition TV (made by Toshiba, with Insignia branding). Of course, Insignia is the house brand of Best Buy, which carries the 2nd wave of Fire TVs. 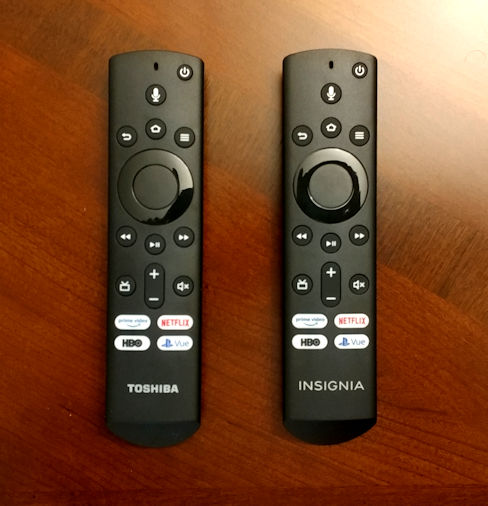 Picked it up for $25, less than the (regular) price of a Sideclick and (in my view) reasonable. If nothing else, some inexpensive peace of mind for owners of the Toshiba Fire Edition TV. Thank you Toshiba, thank you Best Buy.