I am located in Toronto, with a clear view of the CN tower, and not far from Lake ontario. I have an 8 bay inFocus antenna roof mounted on my bungalow, with a 7’ extension on a j-pipe.
I receive roughly 28 channels on my TV, I used to get almost that on my Tablo, until recently, I seem to not be able to get any american channels. Tablo sucks if I cant get all the channels available.
I used to receive channels 2, 4, 17, 29 and 49, now I don’t.
I have opened up a ticket with support staff, but its taking a long time to get anywhere. Support staff have tried returning Tablo back to the last firmware, they have tested the tuner and came up with “I have a weak signal”
I bought a cheap simple signal meter, and it screams strong signal. My tv tuner signal meter also reads nearly 100% strength in all channels that come in. I just find it a coincidence that the Tablo doesn’t now only receives Canadian channels.
Any ideas?

Did a new cell tower go up in your neighbourhood, mate? Get yourself one of those lte filters. I didn’t know the mobiles could affect the antenna signals but I guess they do. I bought one of the filters written about on here and it cleaned up some of the glitchiness I was seeing on a couple of channels.

I had that issue once - some US channels didn’t show up when scanning. I’m in Oakville. I tried my childhood Hamilton postal code that’s a little closer to Buffalo (L8T3L6) and rescanned - there they were. Might be worth a shot.

Summer sunny days seem to affect US channels as well, especially in the morning with channel 2. Something to do with sunlight bouncing off Lake Ontario affecting the signal I’m told. I never have issues in the evening, might be worth considering.

I’m in Richmond Hill Ontario with a DB8e on my roof. I had a similar issue last summer when I went from 28 stations to just the stations from the CN tower. I removed the pre-amp from the antenna and I went back up to 28. No issues since.

Thanks for the replies. I have tried different postal codes from all directions of my location. Ive tried postal codes from Oshawa, Burlington, St. Catherimes, Barrie, even from Rochester and Buffalo. I gain some and loose some. That does seem to affect what scans in. Why? it shouldn’t matter.
This tells me its a Tablo software issue. Too bad we can’t manually scan for channels. The tuner should tune like a TV tuner.

@drcolt The postal/zip code entered into the Tablo has no bearing at all on the results of the scan.

If the results of the scan comes out different each time, this indicates that a number of channels have marginal enough signal strength that they’re fading in and out.

As some have noted in this thread, keep in mind that weather, obstructions and interfering signals all have a bearing on the result of your scan. We’ve got a list of things you can change to improve the results of your scans here.

So the way I see it, is my TV has a better tuner than Tablo.
The only other thing I can try is to add an amplifier. But the last time I did that( before I had purchased Tablo) I lost my local channels. I will buy a new Channel master amplifier and see how that goes.
I don’t have any way of knowing if any new cell towers went up in the area.

So the way I see it, is my TV has a better tuner than Tablo

That is the experience of many users.

It could be possible. The main difference between the Tablo and a traditional TV is that the Tablo has multiple tuners - so that you can watch and record multiple shows at once.

In some cases, where you’ve got channels on the edge of the digital cliff, they can be difficult to grab on devices using different tuners. The best way to overcome these problems is by improving the reception the antenna is providing to the tuner.

So Tablo receiver just gets worse with new channel Master amplifier. Just as I expected.
I’m at a total loss with this. I think I am going back to an Amazon dvr and return or sell the Tablo.
I just bought it in February 2017. It was working nice until early July. I was receiving 20+ channels and now just a handful. Not worth the money. It is a nice concept, but it has to be able to catch a signal like a simple tv tuner.

TV signals propagation can vary greatly in the Winter and in the Summer.

Maybe your strong canadian TV signals are affecting the reception of your weaker signals.

Have you tried inserting a splitter before the Tablo DVR to decrease the power of the canadian TV signals?

So with the powered channel Master splitter booster, I lost even more with Tablo, but when unpowered, reception improved. So today I tried using other splitters I have from once upon a time. It took adding 4 crappy/basic splitters which supposedly loose 3.5db each. Reception improved. It went from only receiving 5-6 ch into up to 16-17. Still not the 20+ I was getting a couple of months ago when I was using same antenna, same cable a direct connection to Tablo, no splitters.
I still cannot receive two channels I liked, 17 PBS for my kids and 29 wutv Fox. I’m still not impressed with this Tablo.
I am in clear view of the CN tower, roughly 20kms away. Maybe my signal is too strong, I need to dumb it down somehow. 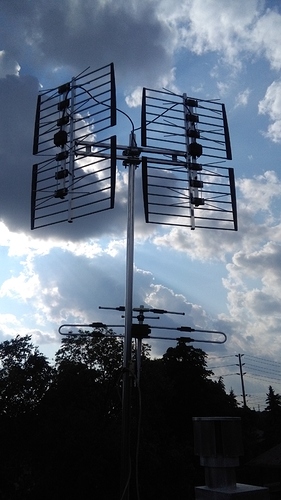 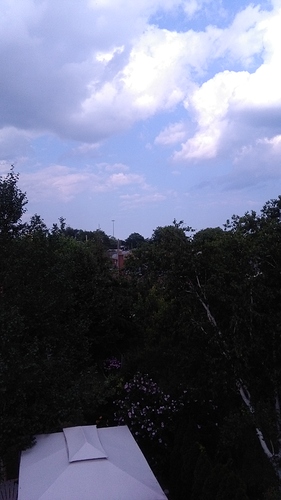 I am also in Toronto. I am possibly in the worst location one can be in for OTA TV. I live in an apartment facing north-west. I do not have direct line-of-sight to any antennas. Even Barrie is blocked by the building across the parking lot.

I did a bunch of research and of the American channels, those have the lowest signal strength. I tried adding a preamp. It overloaded most of the other channels but did clear up 29 and 17 and added a religious channel I didn’t previously get. So, I removed the preamp.

I suspect I could get 29 better (and possibly 17) with a bigger antenna. In your case, it’s probably a weather issue and the signal will clear-up in the fall (I’m just guessing).

As the US has been selling off parts of the analog TV spectrum to cell phone companies (and Canada is following suit) we now have cell phones that broadcast in what used to be TV spectrum and our TV antennas are designed to pick those up. Those signals can interfere with our TV reception. Hence the need to get filters.

What I really need at this point is something that will give me a more detailed view of the signal and noise I’m getting, but I haven’t found any such device at a price I’m willing to pay.