The default scan result is that channel 7-1 has its check box checked for each of the two listings of channel 7-1 in the scan results. If I then ask the Tablo to save this result, channel 7-1 will show up twice in the “live TV” listings.

There is of course a workaround for this bug. The workaround is to uncheck one of the listings of channel 7-1.

But it does look like there is something flaky about how the Tablo carries out the channel scan, since it finds these three channels twice each.

Is it possible you are close enough to two different towers broadcasting two channel 7s?

What is your zip code? We can look at www.tvfool.com and see if there are stations close.

Maybe take a screenshot to show us:

So that’d be 2 screenshots.

I have the same situation in that channels 2.1, 2.2 and 2.3 are duplicated in the channel scan. However in my case it is explainable. Channel 2 has a repeater broadcast antenna 50 miles from the main antenna to better service the surrounding outlying areas through a wider broadcast pattern. Thus channel 2 is actually two different signals coming at me from two different directions. Even though these are different frequencies, they have the same virtual channel number and name that my devices pick up as identical. All of my tuners replicate this situation (not only Tablo). I delete (edit out) the repeater channels since they have a weaker signal strength than the main one. My brother (living 70 miles north from me) uses the repeater signals since they are stronger for his area.

A TVFool report will show whether there is a repeater antenna in the county. The frequencies will be different but the channel names will be identical. The entries will show up in different rows (not together) on the TVFool grid sorted according to signal strength.

Thank you. Yes back when I first set up the Tablo in its present location, I checked all of these things carefully. No, there are not two different towers nearby broadcasting two channel 7s.

Here are your screenshots. 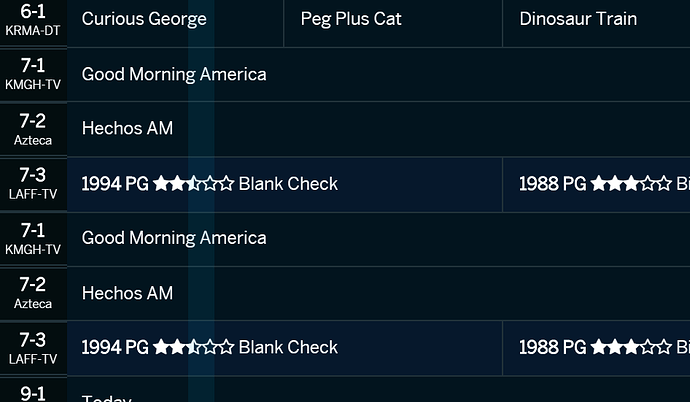 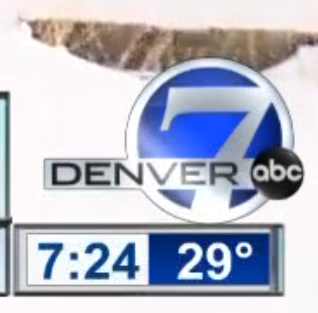 And here is the channel bug that shows up on both screens for both instances of channel 7-1.

A representative zip code is 80234. Back when I was setting up the Tablo I checked the tvfool and antennaweb resources very throughly and carefully and if there were more than one channel 7-1 or 7-2 or 7-3 in the area of the Tablo I am pretty sure I would know about it.

So anyway from all of this I repeat my suggestion that the explanation is some flakiness in the Tablo channel scan process.

KMGH does have a translator-repeater station (see Wiki summary on the right hand of the page):

KMGH-TV, virtual and VHF digital channel 7, is an ABC-affiliated television station licensed to Denver, Colorado, United States. The station is owned by the E. W. Scripps Company, and is a sister station to Azteca affiliate KZCO-LD (channel 27), whose digital signal also serves as a fill-in translator of KMGH. The two stations share studios on East Speer Boulevard in Denver's Congress Park neighborhood; KMGH's transmitter is located atop Lookout Mountain, near Golden. On cable, the station is a...

It is KCZO which though it is real channel 17 is virtual 7:

KZCO-LD, UHF digital channel 17, is an Azteca-affiliated television station located in Denver, Colorado, United States. The station is owned by the E. W. Scripps Company, and is a sister station to ABC affiliate KMGH-TV (channel 7). The two stations share studio facilities located on East Speer Boulevard in Denver's Speer neighborhood (to the immediate north of the studios shared by KWGN-TV (channel 2) and KDVR (channel 31)); KZCO maintains transmitter facilities atop Lookout Mountain, near Gol...

Virtual 7 is what tuners will display. TVFool does not always show all the stations in an area (in my case TVFool is missing several channels).

“A further reason not to think that it is a repeater 50 miles away in some other direction is that the antenna is a five-element Yagi pointed straight at the known location of the transmitting tower for channel 7.”

Although a Yagi antenna is directional, it will pick up signals through the side lobes. One of my Yagis picks up a station 30 degrees off its main axis. My FM radio Yagi antenna picks up a station off its back side (the station is situated diametrically opposite to the antenna’s placement). This is why antennas are also evaluated according to their front-to-back ratio. Some people remove reflectors from their antennas in order to get backside signals.

And anyway when I first started setting up this Tablo, I was using a junk floppy plastic antenna at ground level indoors. There, too, the Tablo was picking up two channels 7-1 and two channels 7-2 and two channels 7-3, all with five green dots. Unlikely a repeater 50 miles away would be the cause of that.

Well, as I say the workaround is simply to uncheck the duplicate boxes. So that’s what I have done.

“A side-lobe pickup of a repeater 50 miles away would not be expected to show up as five green dots.”

A translator station is not necessarily “50 miles away” (as in my case). It depends on what is the purpose of a translator station (is it merely to relay a signal distance-wise or for some other purpose such as working around an obstruction, e.g. a hill or mountain). Some “translator” stations use a different (low powered) frequency within the same area but use the same virtual name and number as the high powered main station. Different frequencies but identical labels within the same region for distributing the same content for X reasons.

Signals also bounce and reflect off other objects thus changing their trajectories and directions. An antenna NOT aimed towards their original direction may yet pick them up.

In my case there are several primary (the dot ones - not sub-channels) missing from TVFool. They are minor stations yet can be picked up antenna-wise. They not only do not show in TVFool but don’t show up in guides such as TitanTV. However checking FCC data, these stations (their owners, capabilities, frequencies and locations) do appear.

Prime example is an Oriental station in my area. How is it publicized? Through churches, schools, businesses (e.g. restaurants), local newspapers and by word of mouth.

I believe sub channels have the same signal strength as primary channel.

All channels in an ATSC transmission are multiplexed. It’s all the same transmission stream, so they’re all going to be the same signal strength.