Tablo says it is recording but is not

I use my Tablo for one thing: football. It’s failed me again this year. The first time was at the beginning of the season when watching actively recording games would skip ahead to the end. That was fixed. Now, games show as recording in the scheduled section and in the live TV view, but they aren’t recording. The “fix” is to stop the recording and start it again. Missed half the game? Too bad. Also, it’s not just the Apple TV app. I checked the app on an iPad too. It’s the Tablo firmware.

Maybe it’s just me, but even if it is I’m tired of paying a subscription for a service that doesn’t work for me.

Also, it’s not just the Apple TV app. I checked the app on an iPad too. It’s the Tablo firmware.

But maybe an Apple device “thing” …if it were firmware as you claim - it’d be able to replicate it on every device everyone is using.

It’s not that hard to determine if the unit is recording. All you have to do is go to the live TV menu. If it’s recording the channel would be blinking and the scheduled game woulkd have an orange line under it. The blinking channel indicates that a tuner is assigned.

Of course if you have a network quad that is recording at the highest quality you only have 3 tuners available and if you try to record 4 someone is cancelled.

That’s exactly what the live TV menu showed, and yet there were no recordings. I thought it might just be a polling issue, the Apple TV taking a moment to update the current recordings. Recordings never updated. I then thought it was the Apple TV app, but it’s the same on my iPad.

My short term solution is to record each game manually, if possible. I think my long term solution is maybe HDHomeRun, not that I think that will solve all my problems, but maybe I’ll have different ones that let me record and watch football games.

And what does the chrome browser on the ipad show.

And when you go into the recordings tab does the NFL item have a number indication of the number of recordings.

I don’t have Chrome on my iPad. Chrome is just WebKit in a Google wrapper. I use the Tablo app, which seems pretty much just a web wrapper too. This is what it shows on the iPad, same for the Apple TV. 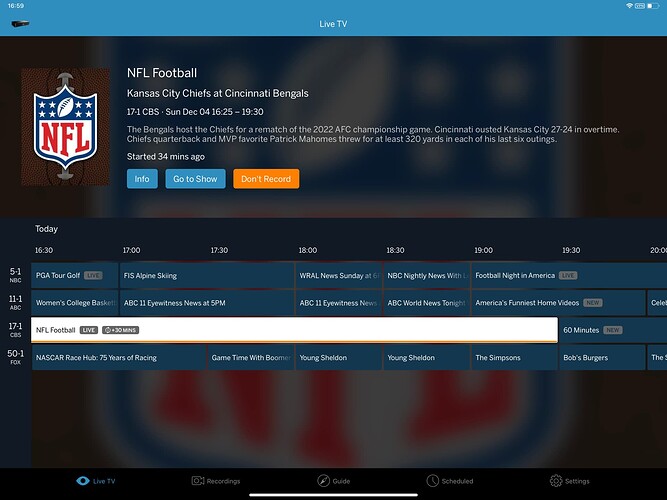 I wanted to test whether unscheduling/scheduling worked. It did not. Thirty minutes into the game, no recording. However, once the game begins I can start recording, so there is a bare minimum of functionality to get me through the rest of the season. The only reason I posted was to see if other people had the problem. If not, great, but since I do I think I’m done with Tablo.

There were two recordings from earlier this week. There should have been four, two from today when I went to watch. I manually began the two recordings and they showed up immediately in the recording tab. A third scheduled recording did not. I started it manually and it showed up. It’s a puzzle, but not really one I’m interested in solving at this point in the season. I’ll just do it manually, cancel my subscription, and reassess in August.