@tablosupport I have a 4-tuner Tablo. Aside from the fact that I find the Roku UI clunky and almost unusable to schedule or look for TV programs, it seems to exhibit some strange behavior.

In general the scenario is as follows:

Incidentally, if I try to locate that show on the desktop (Chrome browser), I can’t find it.

Attempt to click “OK” on the Episodes button (highlighted), since it’s the only way I know of to find out what channel that is.

I click on the down arrow there, mate. I thought that’s what that v shape hinted at. Does that work for you?

the backing data is messed up somehow. I’ve tried what he’s doing and it works for me on everything. In his case, the data isn’t there when using Chrome, but is there using the Roku… something isn’t quite right. Still could be a bug rather than some weird corruption or sync issue.

@Bardel - Are you running 2.2.16 firmware? This isn’t something we’ve ever seen in house, but would like to take a closer look.

I would also echo what @theuser86 suggested and delete then re-add the Tablo app.

Are you running 2.2.16 firmware? This isn’t something we’ve ever seen in house, but would like to take a closer look.

This morning I took the opportunity to attempt to impose some cable order, so I deleted the Tablo app from the Roku, then powered down all devices in the room and re-arranged power and some other connections. hence Tablo was down for a significant amount of time. Powering it up took a few tries to get the Blue LED steady - seems that Tablo won’t complete initialization if either one of Internet, Coaxial cable or HDD cable isn’t connected. Or whatever.

Anyway, I re-installed the Tablo app on Roku and then had to deal with it complaining about “no HDD found” back upstairs, blue LED on Tablo on, blue LED on HDD flashing. Power cycled Tablo again, went downstairs.

Now I’m back where looking at that program and selecting the Episodes button crashes Tablo back to the Roku home screen.

Maybe try deleting the “standard” Tablo app and install the beta version. It works better for me on my Roku 4. 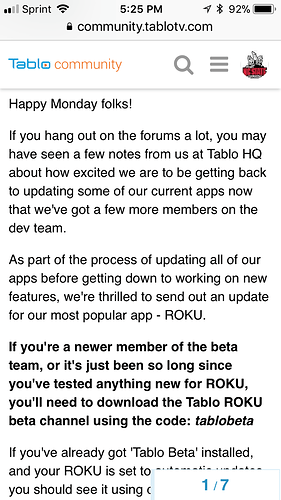 Did the user ever indicate what model of Roku and what firmware release it was running?

A few months ago I was looking to get a new Roku channel and when I used system update I also picked up a 7.x release that was pretty funky/unstable.

@TabloTV Thanks! I did speak with a helpful guy on helpdesk. I’m not sure I’m doing a good job of conveying my issues, but he took the last 4 digits of my Tablos MAC address and said that they have an overnight run that may clear things up. I guess I can wait a day more before I nuke and pave the tablo - As long as it’s reafy for fall season, thinks will be copacetic.

I also, at the request of the helpdesk person (I know his name, I’m just not providing it - I like privacy). submitted a ticket with a screenshot of how one of the offending programs look on the guide in my Web browser. For the sake of completeness I’m adding two more screenshots here.

Both are some of these “broken” programs that crash my Roku. Also, not that I think it matters, but another forum member asked about model and firmware of my Tablo or Roku - not sure. I’ll also upload bad photos of the TV screen showing these.

Observe that the channel information on these shows is missing. It has scheduled times, but not a channel. 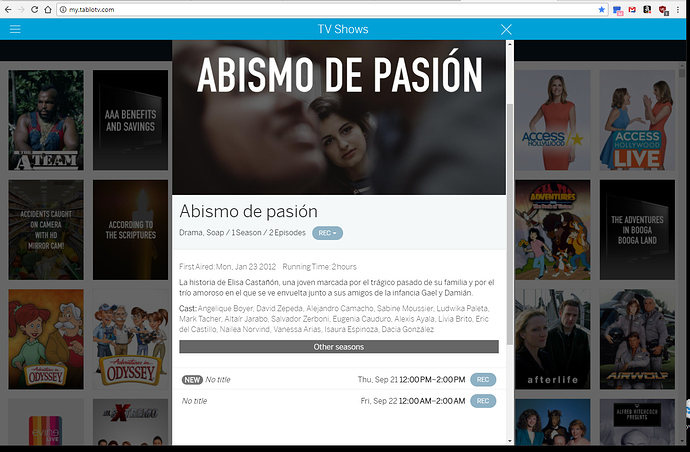 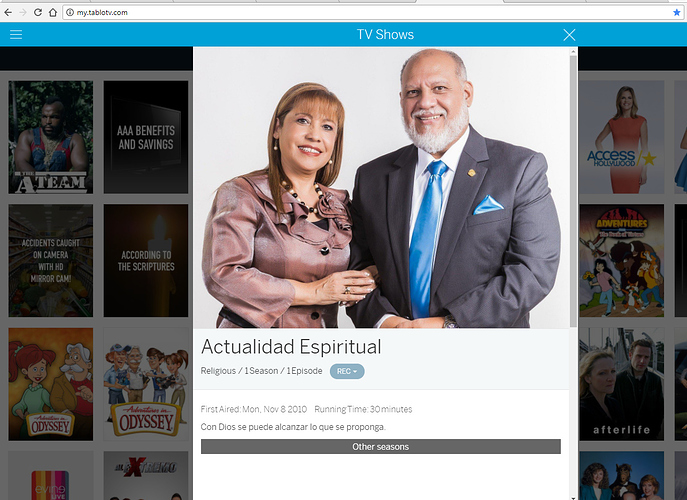 And the Roku details: 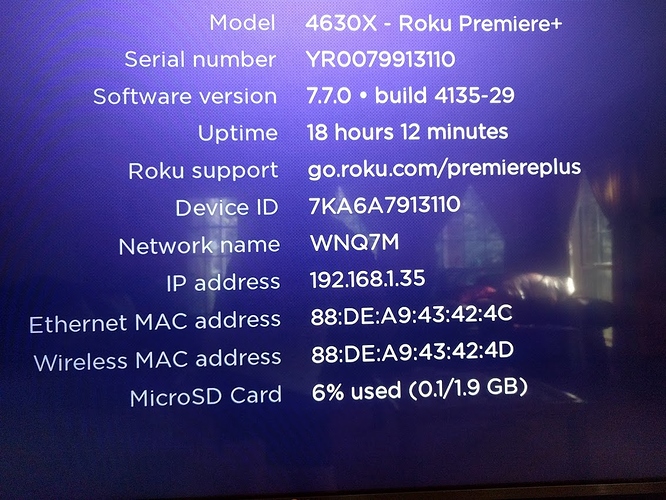 A side story on the Roku, when I checked, the firmware was last checked/updated on the 19th of September. As luck would have it, there was apparently another update. I downloaded and installed that. It had no effect on the behavior of the Roku/Tablo interaction.

As a side note. Since Tablo support is in Canada, do you guys prefer British spelling on words like “behaviour”? Do you put punctuation inside or outside quotes?

Can you try the Roku without the SD card in place?

I am wondering if any data are being stored on the SD card which may be corrupted or causing problems.

Can you try the Roku without the SD card in place?

I’d rather not. I don’t know what other login information for other channels, etc. may be on there.

There’s nothing stored on the Roku that is important - in the past if I’ve had issues with Roku channels, specially Plex or Tablo, I have factory reset my Roku. The Roku automatically re-installs all your channels back on the device so you don’t have to much at all as the channels are linked to your Roku account.

Your problems may be rooted in what’s in your Tablo database for channels and shows if you’re getting different behaviours on different devices such as Roku and a computer.

@tablotv, @TabloSupport: hey guys, thank you so much. Checked my channel guide this morning and all the “rogue” thumbnails seem to be gone. I assume it’s thanks to whatever you guys did overnight. So that saved me a few hours worth of work.

@tablotv, @TabloSupport: hey guys, thank you so much. Checked my channel guide this morning and all the “rogue” thumbnails seem to be gone.

Awesome! Glad to hear we were able to get things sorted out for you

And we’ll figure out who you spoke with so I can give them a gold star.

As a side note. Since Tablo support is in Canada, do you guys prefer British spelling on words like “behaviour”? Do you put punctuation inside or outside quotes?

Since we speak to folks in the US for more than 90% of our days, we’ve totally discontinued the use of the letter U.

“And punctuation goes inside,” says everyone.