What are the industry max temps for SSDs anyway?

it depends on the manufacturer. 70-75C appears to be around the average max. Running SSD’s hot also shortens the lifespan. To that it appears most now agree.

The subject for this thread is “Tablo Quad runs HOT!”. If you look at the OP it’s about concerns related to the hard drive temperatures. I myself have said the Quad has no real heat issues outside of the fact that it bakes the Internal hard drives. When I say bakes they are way outside of industry norms, pushing the limits of what Samsung and others consider max temp for SSD’s even.

The Quad runs hot in any case, but electronics can well tolerate heat that is properly vented and dissipated. I’m using a passively cooled video card with a giant heat sink for many years now. I am tempted to pick up an external SSD for my Quad (let’s see what Black Friday / Cyber Monday brings), keep that drive bay empty and eliminate my fan.

Another instance of way-too-hot, here. I’ve had my Quad about 6 months and I kept worrying about how hot the internal hard drive felt so I tried inverting the Quad and raising it off the shelf, but it was still broiling (and I’ve been getting non-stop sync errors and disconnects which were likely from overheating). I laid a 4-inch biscuit fan on top of it a week ago and now the drive is cold to the touch and most of my errors have disappeared. I’ve been building computers since the mid-80’s so I know when something is too hot and this was the hottest situation I’ve ever seen.

This is what I’m seeing from mine ( 130.5 degrees ). Based on what I just read from this thread, I’ve switched it to wired Ethernet and I’m moving it to where it might get a bit more airflow. I started reading the forum because I’m having trouble streaming a single show to anywhere within my house. It streams for a while, then a spinning disc and then it resumes. Sometimes multiple times in a single minute. Running a Samsung internal SSD. 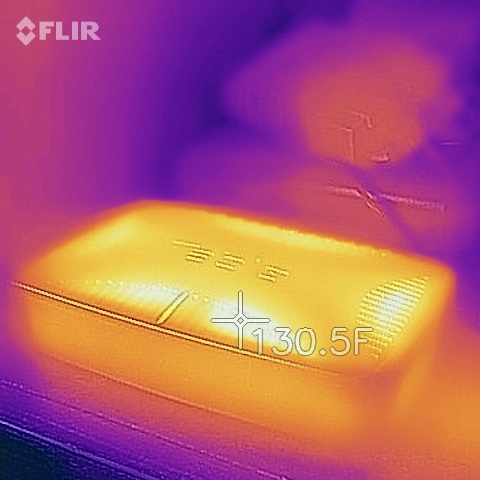 Get a USB fan to put under the Tablo if you’re worried.

Not so much “worried”, just trying to make it actually work reliably. The fan may be next if moving to wired Ethernet doesn’t help enough.

I too added cooling using an old 120mm fan running at half speed. Keeps the Tablo Quad cool. This is a must to keep the electronics and internal drive from early failure.

I’ve got some of the original tablo units with the older heat sink design.
These units are over 5 years old. They have never had a problem and I’ve yet to discover that they have melted into a puddle of silicon.

But I’ve always wanted place a pyrex cup of water on top of they units before I go to bed. Just to see if how hot my coffee water would be when I wake up in the morning.

Great idea, I mean Roku has its secret info screen and no harm come of it; would be great to see a little bit behind the curtain.

From my testing WiFi vs non WiFi makes very little difference. I would be curious to see a thermal image of the bottom of the Quad after running for an hour to so. Quick flip and shoot.

I just got a new Tablo Quad and it too was running super hot with an internal HDD.

For 9 bucks I bought a SATA Data and Power extension cable and now I run my SATA drive externally. I 3D printed a well ventilated cage for the drive to sit in. Not pretty but working great. And now I can use any SATA drive. It doesn’t have to fit in the Tablo case.

Not a bad solution.

This “RUNS HOT” issue seems to resurface every few months.
When I first got my Quad 4 back in September 2019, I had a similar problem where the unit would just disappear from the network. Unplug for a while and then reconnect and it would work fine. I ended up putting a cooling fan under the unit and I my problems were resolved. It was hot to the touch and had an SSD installed.

While I don’t recall the exact temps that I measured, I know installing my fan reduced the temps by about 25-30 degrees F.

Yep, the AC Infinity MULTIFAN S3 I got on Amazon for $12.99 shortly after I started this thread is whisper quiet on the lowest setting and keeps the unit cool to the touch. Its rubber feet fit perfectly under the Quad, blowing air up into the unit. Happy as a clam.

I have an SSD in my Quad and haven’t had any problems yet, but I did notice when testing the SSD before putting it in the Quad that it ran MUCH hotter than a regular HD. That may be a contributing factor.

Just hooked up my Quad today and first thing i noticed is how hot it ran. Can hear the fan and has ample air circulation. Will try the recommendation to use a fan to cool. Otherwise really like the ease of set up and performance!!!