Tablo Not Playing on Roku Express+

Tablo was working great until earlier this week. Now, on the Roku I can get to Tablo, select something, but it won’t play - buffers endlessly.

I’ve reset the router, Tablo, Roku. This worked the other day, and all was fine, but then the issue appeared again today. I’ve deleted unused apps on Roku, and now Tablo is working. I am worried it will start again - can see live tv, recordings, but when try to play anything it doesn’t play.

Tablo fine on tablet, computer, another TV with Roku Express. This Express+ is the only one having trouble. Other streams like Philo, Netflix, Hulu, CBS All Access, Disney+ play fine.

What causes this to happen?

I have used a decent amount of Rokus since I have had my Tablo (original Roku 3, Roku stick, Roku Premiere, Roku Ultra, and the Roku Express). The only one that really gave me issues with the Tablo was the Express, and it was the only one of mine that was stuck using the 2.4 Ghz band (all the others could use 5 Ghz or were using ethernet).

I didn’t have any problems with other apps on my Express, but I will say the Tablo uses a lot more network bandwidth than any other app. With the Tablo, I would get a lot of buffering using the Express (something I just am not getting with the other Rokus).

Now maybe there is something else amiss with the Express and the Tablo, but I just ended up replacing it with a new Ultra (and have had no issues at all). I don’t think it is a processing/CPU issue, because the Express has more horsepower than my Roku stick (the weakest of all my Rokus). But my stick uses the 5 GHZ wireless and the Express could not.

@FCabanski - @snowcat may be on to something…

It’s worth checking the WiFi signal quality on your Roku Express… There’s a how-to here: 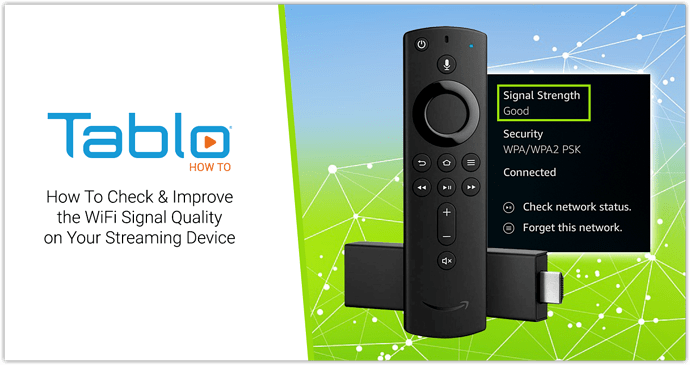 Hrm… Can you try removing your hard drive for a minute and see if Live TV plays without buffering?

I didn’t know you could do that. I will try it later tonight when I am home.

I didn’t know you could do that.

Yep. You can stream a single Live TV stream without a hard drive.

If it streams with no problem, then it may be a drive issue.

If it still has trouble, then there’s something causing a network slowdown between the Tablo and your Roku.

Problem right now is last night and this morning it was working fine. It seems to be not working every time I try to watch a football game, which is the main reason I have the Tablo for OTA: Fox, CBS for NFL and this weekend it was XFL.

Saturday evening, after the problem in the afternoon, I had the TV on for hours. Everything was streaming fine - every channel, every recording.

12:45 PM Sunday afternoon - everything was fine.

1PM, XFL on Fox, nothing would show on TV.

As soon as the XFL game ended - everything was streaming fine.

Unfortunately, we also have a couple of Roku express. RCA and HDMI versions. Both screw up like clockwork, and I am convinced it is heat related. Power Supply is okay, but express runs hot. Issues are same as yours, but I am still able to watch programming on other devices. Express would show buffer issue when loading Tablo channel as well as when trying to view programming.

Router reports a signal degradation during this buffer time, but I haven’t received any sort of network disconnected or unreachable error yet.

We mainly use Tablo for Live TV now, very little recording. Haven’t had patience to try playing back a recording yet. I would surmise results would be similar.

Forgot to mention. We did away with usb supplies and express is powered off TV usb port. TV off, express is off, and cools down. TV on, even if not using Roku, and express is heating up. After about 5 hours, it becomes flaky, and I can reproduce it easily. It seems to start working again after about 45 minutes of sitting without power.

Great, now I can’t watch a cooking show and cook at the same time.

I have a similar issue from time to time only when watching football (college or pro) on our local CBS or FOX affiliate. I have 2018 edition Roku Ultra’s hardwired with Cat6 and I use a Tablo quad tuner (2019) with a built-in Seagate 1TB SSD. I was able to solve the problem by bumping playback quality down to 720p (5mbps) from 1080p. You can check your channel lineup and it should show the native resolution for the broadcast. I had only a few stations that used 1080p.

Is the Tablo also hard wired to your router?

Yes my Tablo is hard wired to a Netgear 1Gb 24-port unmanaged switch. The switch is connected to a Linksys router 1Gb LAN port.

Can you try removing the switch? Just hard wire the Tablo and Roku both directly to the router? You shouldn’t have issues if both devices are hard wired. You should be able to use the highest recording quality of 1080p.

That is not possible. I had Cat6 wiring installed throughout my house. The switch, router and Tablo are downstairs and the Roku in question is upstairs plugged into a wall jack. The bottom line I am only seeing the issue with the Tablo app in Roku. In limited testing I could bring up the same CBS or Fox game in Tablo app on my iPad and no buffering. As I stated to the other party having the issue, lowering the resolution to 720p from 1080p resolved my buffering issues.

Does your network have anything that might utilize STP (spanning tree protocol)?
I’ve had issues using unmanaged, and managed switches with network devices, like Sonos speakers.

I do have a VPN client on a work laptop that is generally active 24/7. A PS4 and Xbox 360 hard wired that are powered off and inactive during the times I saw the picture distortion. I have Comcast 400 mbps Internet. Linksys network tests show I am getting close to that cap at 360 mbps download with 9ms latency. The Roku’s are at latest firmware and network tests on Roku list status as “Good” with 81mbps throughput. I literally have never seen a glitch on the Roku in any streaming service. This includes Philo, Netflix, ATV+, HULU, etc.

I would reiterate that the problem has only occurred on the upstairs Vizio TV in the Tablo app on the Roku Ultra while watching football. I did not see the distortion on the same channels (local FOX and CBS) when watching other programming. The Vizio is a little long in the tooth so I will look into swapping out the HDMI cable or switching the HDMI port used if the problem persists.

I have a Samsung UHD Smart TV that is hard wired just like the upstairs TV to an equivalent Roku Ultra. I plan to test watching games on the same channels in Tablo Roku app. I can also test with the Tablo app on the Samsung TV bypassing the Roku.

I’ll respond after testing this over the weekend.

I figured out the problem. It was a weak signal issue with my local CBS stations off antenna. Review of the Tablo channel lineup after a rescan showed the signal was at three circles and amber not five circles and green. I was experiencing the problem on multiple TV’s and the Samsung Tablo app and iPad app as well. I switched to using the Roku “CBS all access” app and no issues.