Tablo not found on FireFox but Chrome OK

Was working fine yesterday on Firefox. I cleared my browser history because it has been months and it was starting to get bogged down. Launched Tablo again and it cannot be found. Using Chrome, http://my.tablotv.com/ comes up fine. However, I have not cleared my browser history on Chrome and I am afraid to do it. So it is possible that if I do clear the cache I might also not be able to connect using Chrome.

I have hit “Search Again” 30 times already and Firefox is still unable to find Tablo.

Anyone else run into this issue and if so, how do you fix? 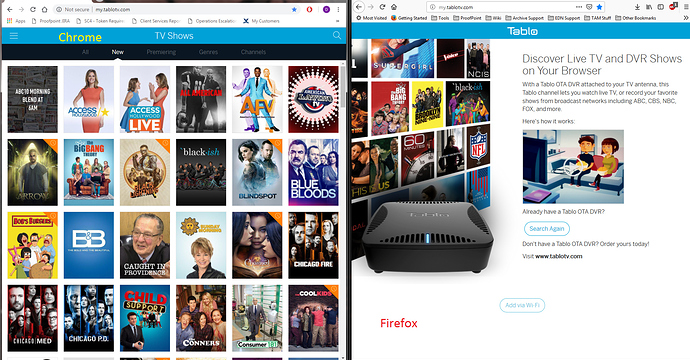 Well, I am back on with Firefox. I disabled “Remote Access” using the Tablo app on FireTV and Firefox connected with no issue. I am not sure why this would have broke Firefox as I have had Remote Access enabled for some time.

Tablo says that the PC/Mac web app is only compatible with Chrome and Safari. You may get some limited functionality with other browsers, like Firefox, but Tablo isn’t supporting those browsers.

One potential fix is to reboot your router.

I can connect to my Tablo via Chrome and Firefox fine, but Edge will not connect no matter what I do.

I have been using Firefox for over 2 years to access Tablo. I understand it is not completely supported but it has always worked for connecting and watching live and recorded shows. I think the real issue is for some reason My Tablo thought I was trying to view remotely, which does not work with Firefox. I figured this out when I tried to watch a show using Chrome and notice the video quality was not that good. I then noticed that I could not fast forward the recording. Basically it was streaming the video like it does when I view my recording from a remote location. I then went into the settings and was given no option to disable Remote Access. So that is when I went to my FireTV and disabled the remote access feature on there. Once I did that, Firefox was working again.

I use both Firefox (preference) and Chrome for tabloTV. When I used an older system for the first time with Chrome, it showed no recordings and no guide data. Though something was wrong. Confirmed things were ok with my primary system. Went back and used Firefox and everything showed up. No, it doen’t may sense and I’m just calling ‘on-of-those-things’. Eventually Chrome loaded properly.

I have multiple tablos and none of them have ever been configured for remote connection. And firefox working has been kind of hit or miss based on firefox version, platform,etc. since they went with cloud apps.

You can find thread postings about indexdb versus websql.