Hello, I have a Tablo Quad/4 tuner device hosted thru a Roku Ultra. When I DVR/record a single program, I can not watch any other programs. It gives me a screen saying all the tuners are in use?? See photo. What is causing this? I should be able to record several programs at once and still watch a live program, correct? Hoping it’s not that busy but I want to be able to if I have need. It shows this ‘no tuners’ screen every time I do a single recording and can’t watch a live channel either. Thanks for all your great help here! Happy Easter to all! 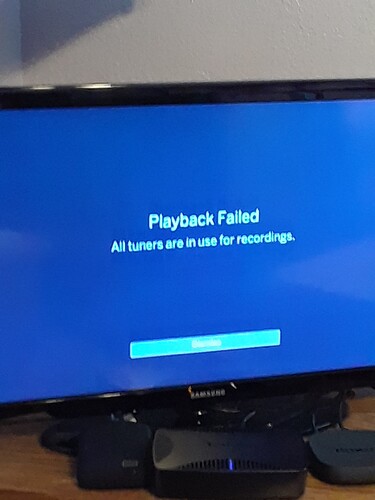 If you haven’t tried it already I’d pull power on the Tablo. I’ve got a Quad and have never seen that message.

If you have the Recording Quality set to the highest setting (HD1080 - 10 Mbps, 720@60fps) and you are recording a station broadcasting in 720p your Tablo will use 2 tuners if they are available. This obviously doesn’t answer your original question, but the more information you can provide may help someone here to help find the answer.

Yes, I tried all 3 or 4 channels a couple weeks after getting the Tablo to test it. From what I remember some recorded but I got a ‘No tuners available’ screen when I changed to a different channel not scheduled. The live channels would not play during that time. I haven’t record that many since. Now I can’t watch live tv when something is recording. I took the (recommended) 720p on set-up from Tablo settings. You say it might take 2 tuners for 720p. Did not know this. Does 1080 take even more tuners to record? I will check which local stations have the higher count. There are several choices on some, 480, 720, 1080. I have 54 channels available, many duplicates. I have about 16 channels in my Tablo schedule. I haven’t had Tablo long enough to test all you have said, purchased 2-27-2022. Thank you.

No, the 720/60 fps situation is the only scenario where 2 tuners are used for one channel. Here’s a good article which also includes those specifics… 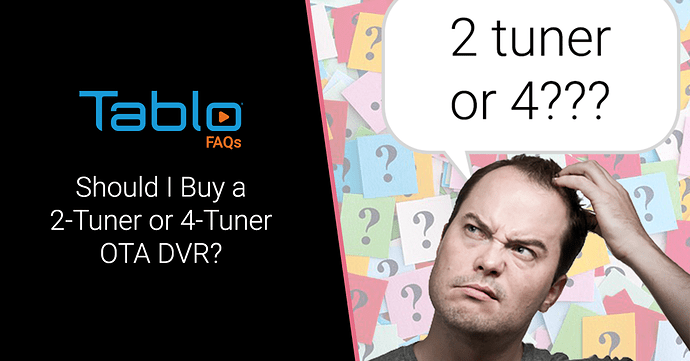 @Marrae I would contact Tablo Support, there could be a hardware issue with your unit. They could verify this and help get you a replacement.

Yes, I will open up a trouble ticket. Thanks.

I also did some test recordings at 3am-4am with 4 shows recorded. 1st choice was 720p and the other 3 all were 480. It recorded the 1st pic at 720p(1st pick) and ‘no tuners’ available for the other 3 recording choices. The last 3 recordings at 3am were 480. I have photos of each recording. Apparently, it’s only taking a single program to record and not the other choices. It seems to record the program I enter first to be recorded. I am interested in the major broadcast, network channels; ABC, CBS, NBC, FOX and PBS, very few others. My broadcast choices are all either 1080i or 720p resolutions and won’t record any second choice show, I’m surmising…ugh. On my schedule it shows, CBS, PBS coming to me at 1080i only. ABC, NBC, FOX are at 720p resolution. I will open up a trouble ticket.

Such a strange issue. Usually if only one tuner is working, it means that the hard drive isn’t connected. But since you can record shows, the hard drive must be working.

If you somehow ended up with a 2 tuner instead of a 4 tuner, you would be able to record 2 shows at a time (no matter the resolution). But you can’t do that either.

If you haven’t heard back from support yet, try to do a factory reset (hold down the reset button for over 7 seconds). It’s possible it might fix the issue, but it sounds like the tuners in the device are bad.

Yes, I have a trouble ticket in with them now. I also get this Tablo screen, ‘No Channels found’. I submitted that with the request. I purchased this new Tablo on 2-27-2022 and set it up then. I finally have time to drill down on this. It was brand new in box from Amazon purchase in late February. I have a 2TB Western Digital exterior HD as storage. I have not signed up for a 14 day guide as yet. I wanted to see how the Tablo acted with 24 hour guide. Not having good luck with this Tablo and hopefully support can help me. I’ve only gotten this ‘No Channels Found’ screen once when I rescanned channels on (4-15-2022) to see if that would help the recording problem. I paused with big eyes… Thank you for all everyone’s help here. 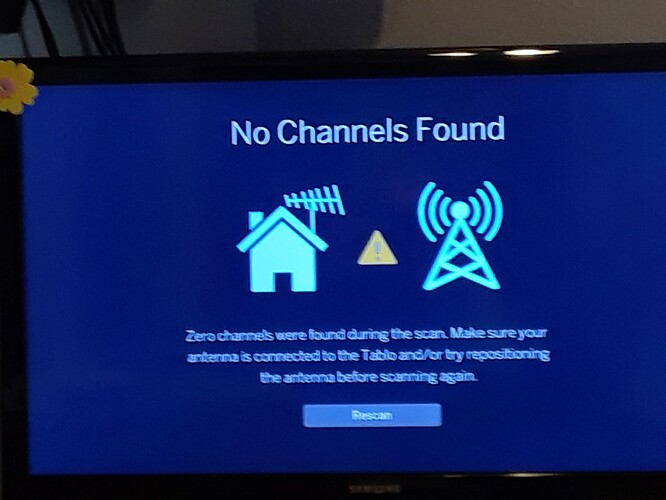 This pic taken on 4-15-2022 about the same time as the ‘No Channels Found’ pic above so the channels are there and watchable. I just can’t record more than one program at a time on 4-tuner nor watch other live TV at same time. I’ve put a trouble ticket in earlier today. Thanks. 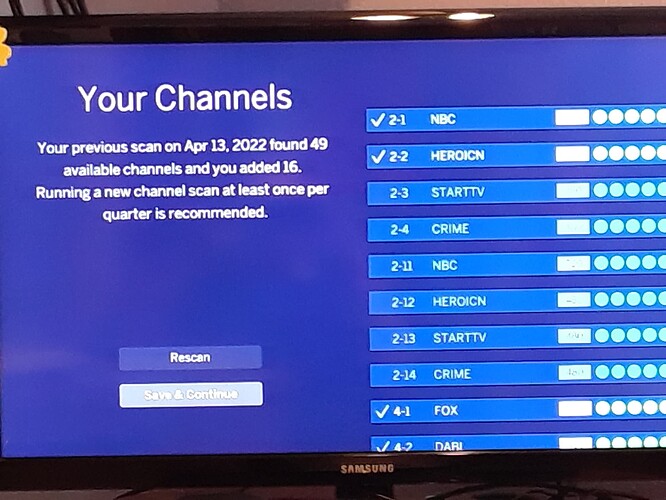 Thanks for sending the details to our team, they should be in touch shortly with next steps.

Tablo was able to reboot my Tablo Quad from a distance with email instructions to me. It stayed in reboot mode for many hours with 2 fast blinking blue lights and a pause, repeat. Later in the evening I got the solid blue light and was able to record several shows at once. I’ve waited a day now and tested it and it seems to be working fine now. Yay! Thanks for all your help here!

I’m glad it worked out for you @Marrae. Tablo support can typically get people up and running again.

I found that trying to watch a corrupted program (video) will also result in the no tuner available message. It was fairly easy to see the corrupted program because there were two thumbnails for the same program. I’m “guessing” there was a momentary power glitch that caused the first recording to stop, and when the power came back on the Tablo started recording again. I’m located in Florida, and this time of year we get a lot of power glitches.

When you have two thumbnails for one program the most likely culprit is usually bad reception although many errors can do that. “Power glitches” as you mentioned is definitely one of those errors. I’d recommend a UPS to alleviate the power glitch problem. Even a cheap one without good runtime has been great! Corrupted files don’t seem to cause any problems on my device anymore. My personal experience suggested it did on older firmware. At any rate when I was having issues a reboot always seemed to fix the issue. Seems like it worked for the OP too. 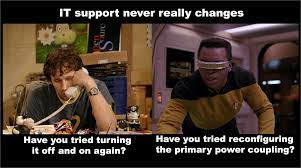 I agree with the UPS; however, most of the low cost ones generate “modified sine wave” rather than a true sine wave. I have a few true sine wave models, but need to purchase new batteries

I have two Tablos, the oldest is over seven years old, and they are both on old style (modified sine wave) UPS’s and they work perfectly. I also have my modem, router, ethernet switches and antenna amplifier on UPS’s so that everything stays on 24/7.

I also have a generator with automatic throw over switches that will pick up the entire house in the case of a prolonged outage. The longest I’ve run on the generator is 6 days and the Tablos and all other equipment worked without problems.

I mostly comes down to the type of UPS to use depends on how critical and sensitive the device is. Clearly a Tablo isn’t a critical device, but then again, that determination depends on which family member you are asking

Clearly a Tablo isn’t a critical device, but then again, that determination depends on which family member you are asking