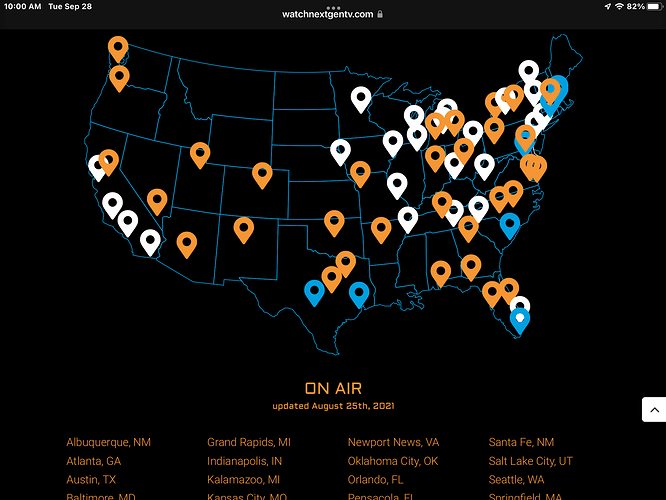 Per Jared Newman @TechHive: " I also asked Nuvyyo, makers of the [Tablo over-the-air DVR] whether the company is planning an ATSC 3.0 version of its hardware. In an email, CEO Grant Hall said Tablo is evaluating its options, including tuner and demodulator chips that can support both ATSC 3.0 and 1.0 broadcasts simultaneously; but for now, the company is focusing on the current-gen Dual Lite and Quad DVRs. “If broadcasters are able to meet the proposed timelines for transitioning major U.S. ma…

IMHO, it becomes more “real” when there’s at least 50% of affordable TVs with ATSC 3.0. Seems like that might still be a year or more away though.

ATSC 3.0 is going to be faster here than we expect. In Atlanta all the majors are on one ATSC 3.0 channel and the reception is great. One of my friends lost 3 out of the 4 major channels this summer using ATSC 1.0. He bought the HDHomerun ATSC 3.0 a month ago and got all of them back at 75% signal strength (where previously 3 of them were at 0% through ATSC 1.0). They now come in stable and crystal clear! If I lose any of mine, I’ll get the HDHomerun immediately.

Again, while ATSC 3.0 may be “present” (though possibly worthless in many ways), it doesn’t get “real” until there are at least ways for people to use it. Again, I see this more than a year away at least right now. If there’s good news, there are now a few enthusiast TVs with ATSC 3.0 tuners, but only a small amount targeting those with deeper pockets.

You might only see an ATSC 3.0 unit when the industry solves the AC-4 sound problem.

AC-4 support needs to be simple and turn key on a majority of highly used playback devices. Otherwise customers will just get frustrated.

I have the SiliconDust tuner, and I love the diagnostics screen. It works comparable to the Tablo in overall performance. I think their DVR screen is substandard compared to the Tablo, but their tuning (changing channels) is a lot faster.

The biggest gain is ATSC 3.0 - but that being said, all the ATSC 3.0 stations are basically a rebroadcast of the ATSC 1.0 signal with AC-4 audio. Sometimes the AC-4 audio works (it doesn’t work at all on my Roku devices, is intermittent on FireTV sticks/cubes, and crashes frequently on Windows/Xbox). Often after tuning an ATSC 3.0 station, it breaks the audio for the ATSC 1.0 stations, and the app has to be rebooted.

Add in the problems with the broadcasters (they are in “beta mode” right now), and ATSC 3.0 isn’t ready for prime time. All of my recordings are with my Tablo DVRs. The HDHomerun is basically a “gadget” that I play around with, and I prefer the Tablo almost all the time.

When the broadcasters get their game together, and actually start adding channels to the mix (they are usually testing with a few of their channels, not the complete lineup of channels which can be done), and it becomes more reliable, then it may be worthwhile to discuss actually creating a DVR that works.

Why mention that - the final broadcast standards are not decided. What happens if they change the ability to record programs, and the hardware of the DVR or software of the DVR won’t work? Could you imagine the flaming of a company that produced something for $200 or more, and it is basically a “brick”?

Until the standards & bugs are worked out, and actual 4K programming is released OTA, I doubt many companies would step up and mass produce the DVRs. SiliconDust has always been a “cutting edge company”, who has taken risks, and sometimes those risks panned out, and other times they failed.

ATSC 3.0 DVRs will happen, it just might not happen in the next 2-3 years. Let’s face facts - most TVs being produced don’t have ATSC 3.0 tuners right now…unless you have major bucks to shell out for it…

Why mention that - the final broadcast standards are not decided.

What standards that affect OTA broadcast haven’t been approved? ATSC 3.0, being IP based, is kind of an open ended standard. There will be many years of proposals for enhancements/add-ons.

Could Dolby be requiring a license fee for ac-4. And no station is jumping 100% into 4k until they have the cameras and production equipment to make local programing in 4k.

An ATSC Standard is a document that states basic specifications or criteria that are necessary for effective implementation and interoperability of Advanced Terrestrial Broadcast Systems. Documents are provided in the links below in the Acrobat (PDF)...

Here in Austin, the broadcasts are live for a while, then they go down for 1-3 days, then come back up. Not sure what has changed, but they are changing the way the signal is broadcast. Phoenix has a lot more problems compared to Austin. I spend a lot of time in the SiliconDust chat rooms looking at all the issues.

While “standards” have been adopted, the broadcasters aren’t fully committed to what they will be broadcasting, and are making changes all the time.

Making hardware that “might” be compliant could be costly. Especially if AC-4 audio requires different hardware eventually. There are too many variables to commit, and any small company could go under in an investment of product that becomes “bricks” because of a change. Either that, or producing 10,000 units, selling them for a 10% profit, then finding out a license fee requires 20% of the cost to make them work. That would mean they sold 10,000 units at a 10% loss.

I own a 4k and have been in the chat room. But my DMA postponed ATSC 3.0 from last Christmas. So I don’t get too fired up about all the babble.

Doesn’t ATSC 3.0 allow for the 4 PLP to be used in different ways. And if so might it take a while before each broadcasters decides how they want to use them. And didn’t the original ATSC 3.0 video proposal not support any quality below 1080p. Of course that automatically eliminates most sub-channels which couldn’t get their programing to that level without remastering the content.

Thus the 3.0 standard was changed to allow for lower quality. And I’m not really sure that demuxing audio requires new hardware. Otherwise ffmpeg/vlc would still be a dream or produce video with no audio.

One of my friends lost 3 out of the 4 major channels this summer using ATSC 1.0.

So the part about stations required to broadcast ATSC 1 for 5yrs past their change over… or at lest until 2023 was made up? 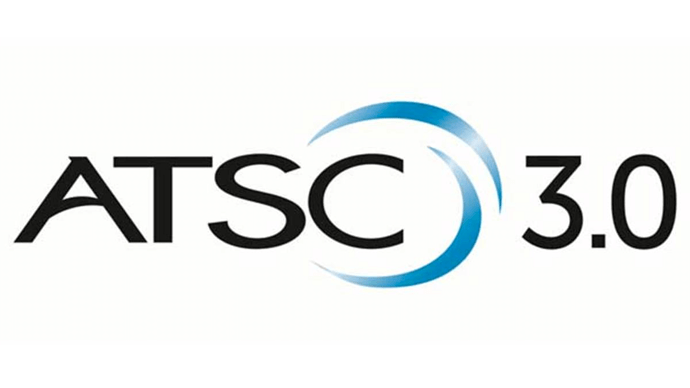 When US broadcast TV switched from analog to digital in 2009, the Advanced Television Systems Committee (ATSC) provided the digital TV standard known as

Or was they just fun’n with you?

The 4 majors in Atlanta are being broadcast on one ATSC 3.0 channel (1080p each one) and scattered throughout other ATSC 1.0 channels at 1080i or 720. A few people are getting great reception through ATSC 3.0 and giving up on the ATSC 1.0 simulcast.

Users have been receiving OTA outside of the contour area for years.

(c) Coverage requirements for the ATSC 1.0 simulcast signal. For Class A broadcasters that elect temporarily to relocate their ATSC 1.0 signal to the facilities of a host station for purposes of deploying ATSC 3.0 service (and that convert their existing facilities to ATSC 3.0), the station:

(1) Must maintain overlap between the protected contour (§ 73.6010(c)) of its existing signal and its ATSC 1.0 simulcast signal;

(2) May not relocate its ATSC 1.0 simulcast signal more than 30 miles from the reference coordinates of the relocating station’s existing antenna location; and

(3) Must select a host station assigned to the same DMA as the originating station (i.e., the station whose programming is being transmitted on the host station)

The 5 year ATSC 1.0 simulcast waiver has alway been built into the FCC ATSC 3.0 rules.

The website says 70 models are now available from multiple makers.

Tell you the truth, I haven’t looked at this for weeks, so maybe things are improving with regards to adoption.

Edit: Still looks sparse and only on “unaffordable” TVs. Maybe you can share a link to a more typical consumer TV that has it?

So if I could get a tablo tomorrow capable of receiving and recording ATSC 3.0, is there content broadcast in ultra high definition beyond the HD content I already get?

Sure it’s broadcast at 3.0 “standards” but is the original content?

Like when someone first got a “wide-screen” and said “I got HD” while their TV was connected to a cable box via RCA red/white and yellow cable.

Since ATSC 3.0 uses OFDM maybe some would prefer to receive channels they couldn’t with ATSC 1.0.

Isn’t that likely a different type of reciever? Than a conventional TV.

When the U.S. picked 8VBS for TV tuner demodulation Europe went with OFDM. And many have complained for years that OFDM was much better.