I use PlayStation Vue (streams cable channels with a built-in DVR - way better than Sling) in addition to Tablo, so at first I didn’t think I’d need more than the Tablo daily guide - that is, until I spent some time looking at it. I get 63 OTA channels with my antenna, and I had no idea how much cool stuff there was to watch until I looked at it through the lens of the Tablo Guide and its categories. So now I want the guide, but I have some questions.

What do most people do - monthly? lifetime?

If you go monthly, wait until a couple days before the free trial ends to sign up. Otherwise you’ll loose those days. If you buy a lifetime, it’s a moot point.

I went lifetime. It’s a crapshoot on whether it’ll work out better in the end, but I didn’t want to worry about the billing getting messed up and missing some recordings.

Vue looks very interesting. I wish they had more devices. I do have a PS4, but I can’t imagine using the game controller as a remote. And I have not heard good things about the conventional remote accessory. I don’t have any Fire devices. I do have an older Roku and a AppleTV4 (as well as older ones).

I really want to buy the lifetime guide, but I’ve spent so much money recently on the OTA setup stuff that I’m scared to add it up. Maybe I’ll feel richer in 12 days.

PSVue will be adding more devices. It’s very new. They were in beta until just a couple days ago. I think the launch was on the 15th. I liked it when they were in beta. No hold time when I called, and I could have long, leisurely conversations with the tech people.

I’ve heard there are problems with the PS4 media remote, too, though I have a PS3 so I haven’t experienced it firsthand. I use a universal remote that has a bluetooth radio for the PS3 and IR for my other devices, but when I first got the PS3 I used a gaming controller with PSVue. It’s an odd shape for that, but it was highly usable - easy to find the buttons in the dark, and everything worked.

I love Tablo and PSVue equally - they’re different, and both very useful.

Forgot to mention… There’s also this little dongle, which will convert your PS4 (or anything else) into a device that can be controlled by an IR remote. I was looking at it for my PS3 until I found the one universal remote that worked with it. I have the Sony PS3 remote and it works well, but it doesn’t control all my other devices. I like having one remote for everything. 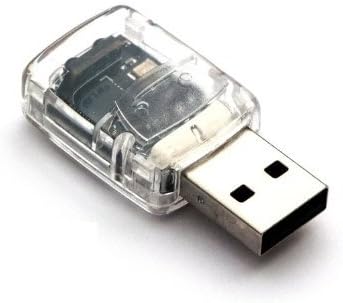 Flirc allows you to use nearly any remote control with any device that has USB including; FireTV, XBOX 360, XBOX One, Playstation 3, Playstation 4, HTPCs, Ouya, Raspberry Pi, and more. Flirc’s user-fr ...

One of the reviews has specific instructions for how he got it to work with his PS4.

I personally went for the lifetime.

I didn’t like paying a bigger chunk up front either, but I looked at it this way:

Thanks for sharing your thinking on this. I greatly reduced my monthly fee (a killer $197.98 for March from loathsome TWC), but I still have to pay for hi-speed internet (need it for work and streaming), and I can’t do without cable channels - especially in an election season - so I have PSVue. Oh yeah, and HBO Now (lotta good shows on HBO that I would miss). So now my monthly bill (for much more than I had with cable TV) is $95/month - not nothing, but better than $197.98.

And then there is the upfront cost… I spent about $500 on hardware setting all this up: HD OTA antenna, tablo with single tuner, hard drive, used PS3 (for PSVue), a new universal remote that can talk bluetooth (for the PS3), and various cables and adapters. Ouch. But that will pay for itself in 5 months.

So… I guess a lifetime subscription is just another month and a half. I have another week or so to think on it, but I’m leaning that way. I’m a little cash poor at the moment, though.

Does anyone here pay monthly? Those are the only two options, right? Is there anything in the middle?

Those are the only two options, right? Is there anything in the middle?

Has Tablo been around for a while? How long? The company won’t disappear before the end of 3 years, will it?

Has Tablo been around for a while? How long?

Nuvyoo starting in 2010.
Released Tablo in 2014.
The company will be open at least thru next week.

Maybe someone will purchase the company within 3 years and totally change direction. Or as some say real OTT a la carte will impact OTA. Or FCC reverse auction and repacking will adversely impact OTA.

Like dad always said “Pay your money and take your chances”!

Maybe someone will purchase the company within 3 years and totally change direction. Or as some say real OTT a la carte will impact OTA. Or FCC reverse auction and repacking will adversely impact OTA.

Re OTT… I suspect that’s the future. I subscribe to Sony’s new PlayStation Vue service, which can stream 100+ channels - including all the major cable channels as well as the broadcast channels - over high speed internet. It also has a built-in DVR service that’s way better than cable TV versions. There are no space limitations, and never any conflicts.

Several other vendors are following Sony and working on streaming cable channels, even loathsome TWC (it would take 50 pages to describe what they’ve put me through).

Plus I live in NYC, which is in the process of providing high-speed WiFi - faster than my cable internet - for free throughout the city. They’re converting old phone booths to WiFi hotspots with USB charging stations and Android tablets for free video calls. (How cool is that?) They’d need repeaters for it to reach into apartment buildings and don’t know if they’ll do that, but if I sure would love to cancel my TWC service entirely (I canceled cable TV, but not internet).

It seems like the world is leaning heavily towards OTT - everything streamed over internet, and it’s getting cheaper and cheaper.

I hadn’t thought of this aspect. It’s an argument for going monthly. I’ve been looking for help in arguing the other side for my poor depleted wallet.

I’d love to hear someone who pays monthly or yearly argue explain why they made that choice. It’s really helpful to hear how people think about this. People bring up considerations that didn’t occur to me. Does anyone here pay monthly? Or annually? Seems like no one does.

Nuvyoo starting in 2010.Released Tablo in 2014.The company will be open at least thru next week.

“Nuvyoo” threw me at first. Name of the company - got it. Not sure why I didn’t know that.

So Tablo is pretty new. Hmmm…

So Tablo is pretty new. Hmmm…

Tablo is a new product, yes.
One that’s saving me $75 per month.
Paid off my initial investment, including lifetime subscription, in a little over 5 months.

I showed Tablo at the Samsung Workshop I attended to say. If a bigger company did purchase then support could be open later or weekends.

No, no - don’t want them to be bought out. We have wonderful, responsive support now. Big company tech support is dreadful. Bugs never get fixed, and the people who respond to questions are trained monkeys who are often overseas and barely speak English. But even if the trained monkeys are American, they’re minimum wage workers with no knowledge reading from scripts. Don’t wish a big company buyout on Tablo.

Think Microsoft. Do you use any Microsoft products? I do. Try getting them to fix bugs. The same horrible bugs have been in their major products for years. No one cares. And all the answers on the Microsoft support forum are from trained moneys - copied and pasted from a script. I never go to the Microsoft site when I’m having a problem. And they screw up everything they touch - even the best products. Microsoft bought Skype and promptly ruined it - introduced a whole bunch of bugs and problems.

Sorry for the rant - I just so strongly disagree that a big company buyout would be an improvement. Stay away, Samsung!

Maybe we should wait to see what the results of the FCC reverse auction are. The government wants OTA to vacate UHF spectrum and either sale their license, move to low-vhf, or repack with other channels.

None of these are good for OTA products like tablo or tivo.

Obviously your choice to pay for other services… But for me, doing tablo 4-tuner and 5tb hard drive for $425, plus a second roku (already had one) has already been paid for after 5 or 6 months… Even with the lifetime subscription, I only got another month to go and I am “even” on what I would have paid for satellite. So, for me, I am now ahead with every day that passes…

Technology will continue to evolve and change… If OTA goes away Next month, I still saved money. I am not concerned about it…

Even if it does, it will probably be many years away…

And, of course I still pay monthly for Internet. Necessary expense based upon current options…

I have found over the years, that in many cases the time and effort spent to research something to death and save 5 bucks is no longer worth my time…

And also, being afraid of “what might happen” isn’t worth it… If there is a known newer technology that already is available I will look into that and consider if it’s worth it… If “something might change sometime” I don’t consider it unless there is proof it’s about to the released.

I see no reason to not save money, and enjoy what’s available now because I think technology will evolve next year… Of course it will… If I lived like that I would never buy anything because it would always be outdated eventually.

I enjoy the technology that I want now, try to be frugal about it, but don’t deny myself either if it’s a reasonable solution.

I’m not denying myself anything. I bought a Tablo, an antenna, and a hard drive (plus hardware to stream cable channels through Playstation Vue), and I will be buying the Tablo guide in one form or another. But I have more time than money these days, so for me it’s best to carefully research every choice.

P:
I pay monthly. I’m a fatalist. The on!y constant is change. Also getting older. Three years may just be a pipedream.