So the iView demonstrates that channel 51 does transmit PSIP data interpretable to construct a guide and schedule recordings. It also shows that this isn’t a signal strength issue (confirmed by the TVFool NM category). TVFool also shows no adjacent channel interference for 51 that would disrupt that frequency. Interesting what Tablo probing will show…

Well whatever Tablo says or does (or doesn’t do) at least you have an alternate way of getting 51. That is one of the reasons I got the Homeworx - as an alternate way of getting reception to supplement my Tablo. I prefer to watch and record sports events on my Homeworx. I refer to my DVR system (Tablo plus Homeworx) as my 3 tuner system. For another thirty bucks I may even bump that up to a 4 tuner system. An expandable system…LOL

The tvfool.com report confirms the antennaweb.org, winegard,com, and channelmaster,com report. Out of 17 channels that have LOS, channel 51 ranks as 14th at 28.6. While kxtu comes in with 37.8.

In fact I did something like that - the alternate route thing. I had a channel in a completely different direction from all the rest. Rather than screw around with combining multiple antennas, I simply put up another antenna facing in that direction and hooked it up to a Homeworx 180. All the channels save one go to the Tablo from antenna 1; antenna 2’s channel goes to the 180. Then got another 180 for the projector. Super Bowl never looked finer than through the 180!

Just following up - as I noted in the other thread I linked in my earlier post, I found the emails between the local station engineer and myself, and one of the things in those emails was a link to the original article I found that led me to discover the PSIP error that was affecting my WMC setup.

Unfortunately, that was 4 years ago and the link was dead, but I tracked it down on the Wayback Machine. For anyone who may be interested, this has more detail about what was going on:

And here are is an example of the TSReader Lite output that shows the mismatch between TSIDs in the stream that was causing trouble: 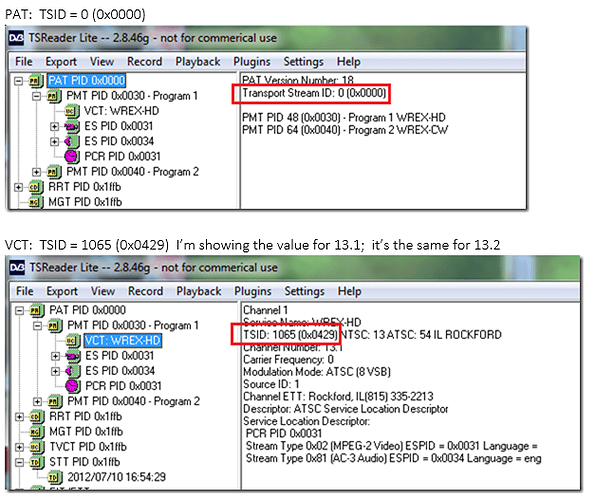 Update: The Tablo support team looked at my unit after I opened the support ticket. They confirmed that Smurph was dead on, it is an issue with the PSIP data. Channels 51.1 and 51.2 that I receive with my HDTV’s and my iView 3500STBII are not sending the PSIP data or not sending the correct data. Thank you to everyone who participated in this discussion.

Who is responsible for fixing that - the station? And that is one of the reasons I keep around the Homeworx - simple box just bulldozes its way down the road…when its more complex brethren trip across the stumbling blocks…

Who is responsible for fixing that - the station?

The engineers at the station are supposed to include this data in the stream but apparently there’s an equipment manufacturer sending out a software update and telling the engineering teams that a field within that software doesn’t need to be filled out… But it does and if the data is missing, badness ensues for anyone using the digital information to tune/understand that channel.

We’re trying to figure out which equipment manufacturer it is so we can prevent this from happening more often.

I sent my Tablo back to Amazon because it would not pick up my most favorite channel ‘METV’. I’ve seen the comments about the PSIP issues and felt i did not have the inclination or energy to do a ‘needle haystack’ search at this time. But I will continue to follow this dialogue to see if and when the hiccup is remedied, then I’ll reinvest.

Contact Tablo support with your zip code and they can contact the guide provider. But even in guide is missing, you can still tune the station by clicking on station name.

Ta lo has internal 4 way splitter so an amlified antenna might help.

Oh wow! I’m having the same issue! It’s now March 2021, I just recieved my first new Tablo DVR, the Tablo dual hdmi. But it won’t pick up my metv (in nyc) despite signal being perfect. I called Tablo heeee told it’s a PSIP data issue, so I emailed the channel manager at metv, he says no psip data is missing, so idk! If I can’t get the one channel I watch most… I’ll send this DVR back. What a shame!!!

If I can’t get the one channel I watch most… I’ll send this DVR back.

This is a wise choice.
While I have 3 Tablos that function perfectly, in 2 locations 45 miles apart, doesn’t mean it’ll work for everyone.

I called Tablo heeee told it’s a PSIP data issue, so I emailed the channel manager at metv, he says no psip data is missing, so idk!

Maybe you can kindly ask Tablo to reach out directly to the channel broadcaster? They have done this in the past to resolve other issues (I’m not sure if it was exactly the same issue).

You can provide a PSIP detection “switch option” or “PSIP bypass” on the Tablo software, isn’t it?

I did ask them. He said no that isn’t their business to do. So he couldn’t really do that. I’d have to contact them personally. I couldn’t believe it. How isn’t it their business when it’s ONLY their box that isn’t picking it up. So if every other box is, and yours isn’t, seems to me like it is something on your end. And after contacting the metv channel manager, and he confirmed that his channel is running the standard regular format, like most other channels, and he emailed me a bunch of charts showing how his signal is perfectly within all regulatory standards, and not missing any PSIP data!! I fwd those charts to Tablo never heard back. So this just makes me believe more that it is indeed on the Tablo end that causes this issue, not the broadcaster!

The one thing I think it’s possibly the cause of the issue, cause this is something both RF channels that aren’t picked up, have in common. Both these RF channels have some audio only channels, as well as regular video channels. So I’ve seen tuners that would omit those audio channels, but they’d still pick up the video channels. I’m thinking maybe this is the cause here? Maybe they set it to skip audio only channels, and somehow that causes it not to lock on to those RF channels at all during channel scans.
I wish they’d pull their heads out of their asses and realize that it must be something on THEIR end causing this issue. Cause there is nothing wrong with the metv format as the charts proved. Nothing wrong with my signal cause it has a steady 100% with my big rooftop antenna… So … Looking at you Tablo.