Kinda frustrated with this. My Tablo was set to record the Opening Ceremony last night, and I checked it to make sure it was recording, but I woke up to day only to find that there was no “Winter Olympics” entry in my Recordings. The recording seems to have either not happened at all somehow, or failed for some reason, but I can’t figure it out. Some other Olympic recordings might be missing too, but I can’t remember if I set any of the per-ceremony events to record. Other scheduled recordings from yesterday and today were successful, and there weren’t any conflicts either. Please help because I at least don’t want to loose any of the events I was planning to watch.

Same issue of missed recordings here, suddenly happening after firmware updates on both of my Tablos. 3 occurences so far in less than a week.

Same shows I have been recording for years are now skipped once in awhile.

Same here. Set it more than a week ago: 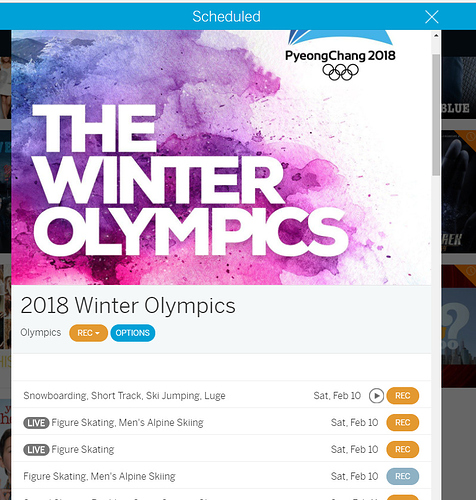 WTH: went out, went back in. Tablo resynched and now there are 3 recordings. Wife’s watching one via a Roku. 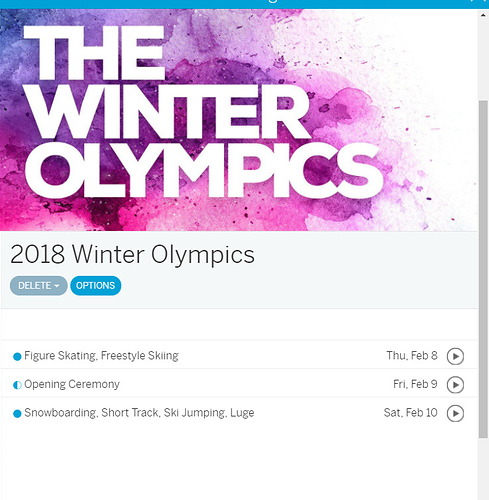 On my (more) trusted Youtube TV, I have 15 shows recorded off NBC, plus the shows off the NBCSN and USA, for a total of 25 shows. Weird that Tablo only recorded 3 shows… 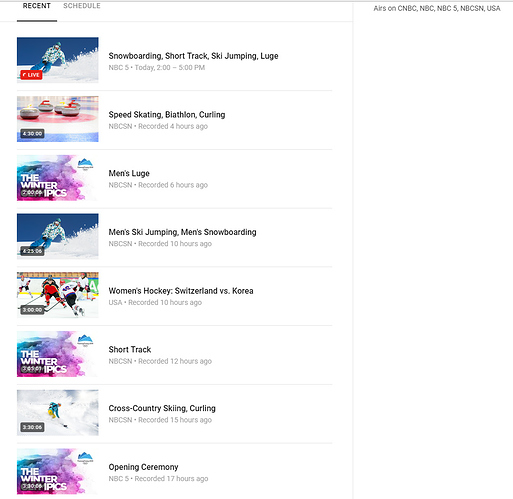 Time to go set my Tivo to work.

Had lots of trouble with my Tablo recording the 2016 Olympics.
The guide info kept changing.
My solution was to set Olympics recordings to ‘Record All Episodes’, and disable ‘Don’t record duplicates’.

Weird that Tablo only recorded 3 shows…

There have only been three broadcasts on NBC so far. Figure Skating and Freestyle skiing on the 8th, the Opening ceremonies last night, and one block this afternoon (Snowboarding, etc). You’ve gotten them all.

And it just missed the Snowboarding event I wanted to record today. Yay…

Trying to record it now, but it missed the beginning of the broadcast, and I don’t think this is what aired earlier today. Hard to tell since NBC’s TV listings are pretty vague, even on their Olympic site. Looks like I’m gonna have to borrow my relatives Cable login in order to catch what was missed, but the video quality on NBC Sports app sucks compared to the OTA broadcast.

There have only been three broadcasts on NBC so far.

That’s weird, because the YT TV claims 15 recordings with NBC as the name of the “channel” as opposed to those on the NBC Sports channel, USA, etc.

That’s what I’ve gotten as well. At the time of my last post, there were only three. Then there was another at prime time, and a third (for the 10th) at 11:30.

That’s weird, because the YT TV claims 15 recordings with NBC as the name of the “channel” as opposed to those on the NBC Sports channel, USA, etc.

YouTube probably has the stuff from NBC.com that was never actually on broadcast.

That or they are organizing the content from other “sister” NBC properties (USA, etc.) under one umbrella Olympics category since from a YT TV perspective they don’t really care where it originated.

It’s fair. After this discussion started yesterday, I set my Tivo up to start tracking/recording Olympic events. My Tivo is set up to only record OTA, (it won’t include streaming channels in the list of available shows). I’ll check that. Unfortunately, it’ll start after having missed at least 3 or 5 shows.

I will say that YT TV does list the specific channel designations (USA,NBCSN, NBC5, NBC, CNBC, etc) when it shows the available “recordings”. Look back at the screenshot I posted previously.

If anyone is to blame here it’s most likely the guide data Tablo provides, which shifts some of the onus off of them, and only leaves them culpable for contracting with a less-than-perfect guide data supplier.

Which all the SNAFUS with guide data makes a strong supporting case.