When I got my Tablo I originally set it up with an ethernet cable. I’ve decided I would like to move the device and connect it to my home WiFi. I took the following steps:

At this point I see a “Choose Wi-Fi Network” screen with no WiFi networks available: 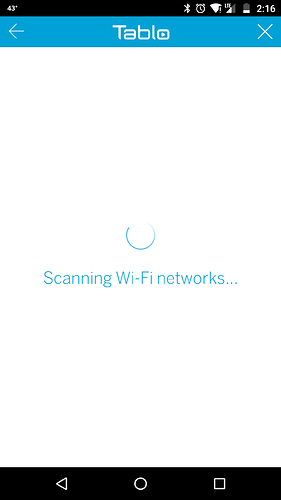 Any hints on how I can get this device to find my home Wifi? I have the device sitting in the room with my router which is running a WPA2-PSK secure network. I’ve also tried entering the information manually with no luck.

Have you tried rebooting your router?

Is your SSID hidden? Not sure if it will work with it hidden.

I have not tried rebooting my router, but I don’t believe the router would be the issue. We have quite a few wifi networks in my neighborhood that I can see, but the Tablo doesn’t see any. I can give it a try, though.

Nope, the network is not hidden. It’s a TP-Link AC router broadcasting both a 2G and 5G network.

I just got it working. Here is what I did in case any one else runs into the same issue. I again reset the Tablo and opened the app and selected “Add via WiFi”. I then connected my Android phone to the “Tablo_****” wifi network and returned to the Tablo app. I noticed a notification at the top of my phone that stated something to the effect of “Internet not accessible on this network. Click for options.” I click the notification and was presented with something like “The internet is not accessible on this WiFi network. Stay connected?” I selected “Yes” and returned to the app. Suddenly all the WiFi networks appeared and I was able to select my home WiFi and connect.

Thanks everyone for their suggestions!

What phone are you using and what Android version is it? Sounds like an issue with the phone not staying connected to the Tablo_xxxx WiFi.