Not really a question so much as an observation and even a review of sorts. I bought a 4 channel Tablo a couple years ago. I have been using almost exclusively firesticks. I have had more and more difficulty keeping the app from giving the “Unexpected error” and kicking out during playback. I talked to support way back when and they said it was some sort of unchecked receiver error that caused the issues. Well I’ve tried lowering playback speed and pretty much everything else with only so-so results.

UNTIL! I bought a new Samsung G6 series tv a few days before the superbowl. I have downloaded the Tablo app and haven’t had a SINGLE problem since. I have increased my streaming speeds to max, it works as it should. The ONLY difference in my setup has been the TV. My other tv firesticks continue to have issues.

The best thing to do if you are having processing issues is increasing the horsepower. I have the opposite situation, my. TCL 4 series 55" is dog slow, but my new model 4K FireTV is slick as can be and everything runs fine there. Trying to access the same thing directly from the smart TV gives me issues, especially if two things are trying to access the Tablo Quad’s 2TB SATA hard drive.

LOL!
Scotty: “I’m giving ya all I got captain!”

I guess you’re right. I didn’t get buffering or lagging, just “playback error” and tablo unavailable(?) errors. Had just assumed (with some help) that my antenna reception was to blame. NOT exactly the case. seems 24.99 is not exactly the great deal it appears.

I have found with the firestick that you get a big improvement in performance if you clear the fire stick’s tablo cache. The tablo app was almost unusable until I did this. I think it gets corrupted somehow.

This is a good argument for using an external device as opposed to the one in your TV. Even though buying the new Samsung and using its app fixed the issue. For me… I have a 4k Samsung in the living room. It doesn’t run the Tizen OS so… no Tablo app. I have a Roku Ultra connected to it instead. Awesome experience. AND… replacing the Roku (if necessary) is a boatload cheaper than replacing the TV.
Just food for thought. And I realize in this case the purchase of the poster’s Samsung was probably something they were gonna do anyways.

Precisely my point: replacing the TV is relatively expensive. Buying a new Roku Ultra right now is under $100 and gives you tons of processor power. The main problem with almost every issue we hear here is lack of horsepower in the playback engine.

Next year, or two - a newer Roku or whatever is the best choice at that time will again cost you under $100.

Even with 4k HDTV prices taking a nose dive like this year, you may need/want a new TV, but it will almost certainly always be more cost effective to replace the engine, in this case a small box or even a stick type device that just plugs into one of your HDMI ports.

@dylanapollo @hutchewon Sorry to hear you’re having a rough time with using Tablo via Fire TV.

As @hutchewon mentioned, deleting/re-adding the app can clear out any data that might be corrupted.

Tablo PREVIEW does not sync data (which can develop problems over time) and includes some of the newer features.

Using a newer Fire TV device is also helpful. The original Fire TV sticks had very poor WiFi and are not recommended. 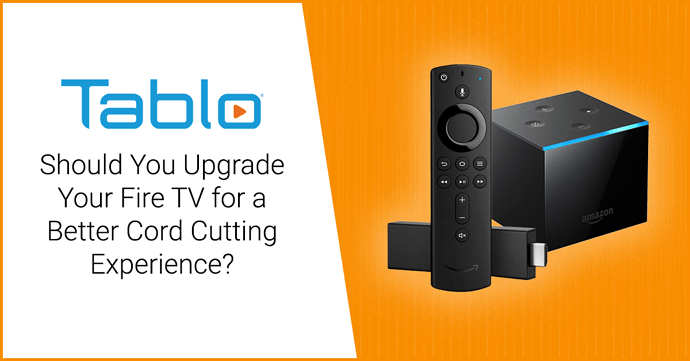 Should You Upgrade Your Amazon Fire TV for a Better Cord Cutting Experience?

If you use an early model Amazon Fire TV box or stick as your main cord-cutting device, it may be time for an upgrade.

Thank for the response Tablo, I’m testing @hutchewon’s theory on a FS in the bedroom. This isn’t used as much, so results will take time.
As I mentioned I have several FS’s throughout the house. I have/had the same issues on all of them.
I have tested removal of app, settings changes etc,. I have also used both Tablo, and Preview versions. While the Preview version loads and is a better app IMHO, the issue occurs in both. I cannot test on TV(Samsung), as there is no “preview” version available for it.
Also, to be honest. Some have mentioned the better processing power of the new device being the difference. I don’t know that I buy that… Completely. Yes it’s more processing power; however, ALL other apps have worked flawlessly on the FS. I have no lag, delay, or stuttering in ANY app including Tablo. It just stops broadcasting and “Unexpected Error” message.

Note: This is different from the message I receive if the Tablo itself reboots. Something like “connection lost?”
The Tablo will reboot: If a station is not coming in clearly (weather etc) and it’s being watched or recorded. As explained to me by support. The error is not trapped (ie redirected to NULL) therefore, the only way to clear it is to have the device reboot?

More as I research.

Re-read my original response. It is not necessarily the FS, but it could easily be trying to access it from any other device(s) at the same time. Mine works great on the Smart TV, but it works best on the 4K FireTV stick especially when I am using anything that accesses the database at the same time, like a program from Windows or Android to just copy recordings, and I am using a SATA drive which should be best with the multiple access.