I scheduled the super bowl to be recorded a week before the game. I started watching the game as it was being recorded (about 5:30pm MST). I thought it was strange that there were many hours of pre-game show recorded… but eventually fast-forwarded to the game. Then shortly before halftime the playback stopped - end of recording. And so I had to switch to watching it live, to find out there was like 6 minutes left in the game. WTF?

Looking now at the recording - it says it recorded from 12pm to 4pm (see pic). Which would make it sound like I picked the pre-game show to record, but I was pretty sure I was careful not to do that, and even if I did, why did I get an hour or so of the actual game? 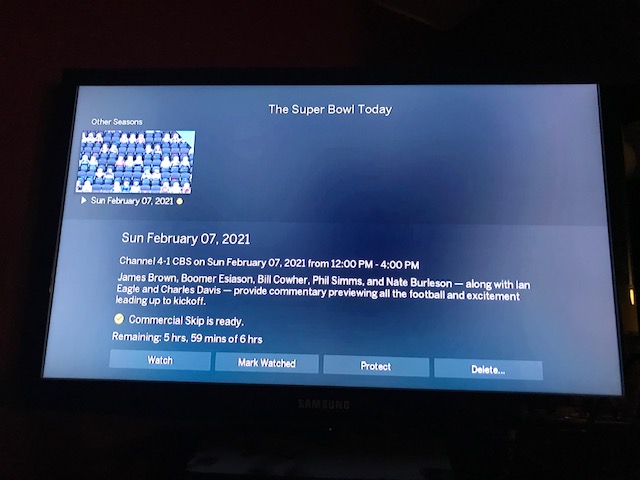 In Settings do you have Extend Live Recordings checked?

If so, I would imagine pre-game was flagged as a live show and if that box is checked it adds 50% of the scheduled record time, which would make it 6 hours total, which looks to be the length of your recording.

So unless Boomer Esianon and Phil Simms are unretiring this is not the super bowl but the 4 hour pregame show.

Just looks like you didn’t actually select the Super Bowl to record. You set the pregame to record which is a different “episode”.

19 out of 21 of my single event scheduled sports recordings got turned off sometime after Monday February 1st.

The 2 pre-superbowl TV shows also got turned off.

Most sporting events occur on the weekend. So if there is something really important it’s always wise to check on Saturday or Sunday.