No, time shifting is the main reason to buy a DVR. Commercial skip is a bonus.

To some degree I understand how commercial skip works and why it has limitations and is not 100% perfect. Knowing that, I’ve been happy with the performance of commercial skip and I will miss it if/when it is completely sunset. I also understand why people expect commercial skip to be 100% perfect and I think Tablo did not do a good job setting expectations on it’s performance and now they are living with complaints that make the entire endeavor no longer worth pursuing.

While I’m not a current commercial skip subscriber, I did have it for a year, and I thought it worked pretty well. But like many, the budget said “no”.

I was bummed to get this e-mail today. I’ve been very happy with commercial skip and think it adds a lot of value to my Tablo. I’ve thought from the beginning it was priced too low. I’d rather have them raise the price than eliminate this option. I’m hoping it’s being discontinued due to another solution in the works.

Just looking at how long people have had accounts on the this community, it looks like some of the most disappointed people are ones who likely got a Tablo when ACS was already available. There are a lot of us who have had our Tablo units well prior to ACS so it really is just ‘icing on the cake’.

I can understand your use case @meebee but as a comparison our use case is totally different. We very, very rarely watch anything live/while it’s still recording. As a result, when we watch a recording the previews/thumbnails have almost always been generated and we simply do our commercial skip the old fashioned way.

I’m guessing there is a technical limitation that prevents them from being able to generate the previews/thumbnails while the show is still recording.

While ACS would be nice to have, I have other things in my budget that money, small as it is, is better used for.

I see a few comments stating Auto Commercial Skip isn’t worth the annual cost, but I think it is. At $20/year, I’m very happy to have most commercials simply ‘move along’.

The reasoning behind their decision is spelled out on their website…read. If it’s not cost effective to support then saying it will be available for the foreseeable future is misleading. They’ll dump it asap.
I’ve been a user almost since the beginning of Tablo. Also have an Amazon FireTV Recast. They both have advantages and disadvantages.
Recast - FREE TV guide
Tablo - Commercial skip and TV guide subscription $$

I’ll be retiring the Tablo and going back to the Recast and FREE Recast channel guide when my subscription ends.
IMHO A bad business decision Tablo.

I doubt there is anything new coming to replace ACS. From the beginning, go back a few years and look at the posts, the way ACS was implemented caused concern and in the end the Tablo management looked at the numbers and concluded they could dump the service and not affect future sales.

This is purely a bottom line decision made by the CFO.

Remember back to April 19, 2019 when Tablo announced this great new feature? I think the methodology used increased to cost of implementation: 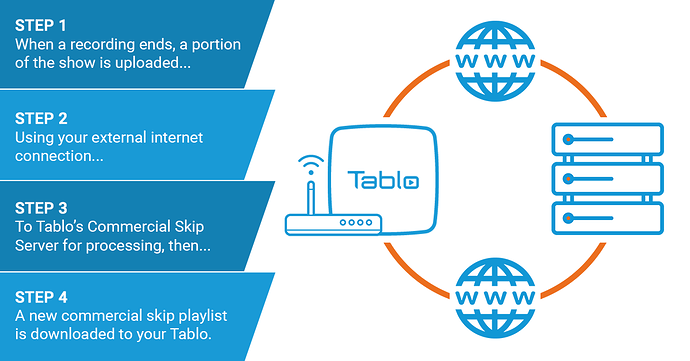 All the extra processing included with their decsion increased costs. Given their internal analysis of the market, continued inflationary pressure and long-term projections we are here now, after 3 years, at the end of their experiment. They bet on the wrong technology.

Now that they put a cap on the number of users who can get ACS they will keep it running until it falls below break-even. Based on current inflation that may be sooner than you think.

ACS was a neat feature when it worked, but it was not worth the extra $. Should have been included in the guide subscription. Even the guide service has gaps and glitches and I am frankly disappointed the HDMI versions can only get yearly/monthly plans. Thought a lifetime plan was available for all devices when I bought the unit!

What’s next, Tablo? An email that says, “you are on your own, we quit?”

There are other (more cost effective) ways to do CS, perhaps you can try alternatives before you just give up!

At any rate, it gives me pause to find out Tablo cannot seem to sustain previously advertised features and it makes me wonder what other nasty surprises will pop up down the road.

Do I hear rumblings of a class action stirring out there?

I am another in the boat wanting to state that I really like the feature and am glad to pay the $20 for it. I see the same writing on walls that it may not last too much longer for those with it either.

It may not be 100% but for us I would say 95% and that much is well worth it. The ones I have problems with are sub channels that don’t have as good of signal.

Just chiming in hoping enough say they love it they might keep it around longer or research into other methods.

At any rate, it gives me pause to find out Tablo cannot seem to sustain previously advertised features and it makes me wonder what other nasty surprises will pop up down the road.

I’m sure there are minimum costs associated with providing the service, and I know it’s easier for me to say this since I don’t use ACS, but if enough people aren’t paying for the service to cover the cost, wouldn’t the math pretty much explain the situation?

True, but wouldn’t the math also show what the profitable cost to provide such a service would be? Several people responded that they would pay more (me included) so why not survey the user base and determine if they can make this a better ROI?

Fair point and question. I’m just saying that while they gave some details as to their decision, there are obviously things we don’t know about that factored into their decision.

So they decided to never fix the low audio output, now they are cancelling the one must-have feature. Ending the CS service is a business issue, just figure it out! Sheesh!

Tablo gets harder to recommend every day.

You must have a lot of uninterruptible free time for watching linear TV. What happens when there are two concurrent show you want to watch.

“Must have” is subjective, it depends on the specifics of your situation. Tablo didn’t have ACS when I purchased many years ago so it’s not a necessity for me.

If you back far enough there was no thumbnails. They didn’t show up until 2.1.24 in march of 2015. But users survived.

Broadcasters for years have done what they can do to make commercial detection harder and harder to do.

Agreed. That’s why we do it manually. It never misses a commercial.