Starting this morning, July 1st, 2022, CITY TV will not play live TV shows on my Tablo Quad. All other Toronto stations are fine. I re-scanned the channels to no avail as well as re-booting my Tablo DVR. Still no success.

Any help or suggestions would be appreciated.

Just a shot in the dark, but possibly linked to a station configuration issue?

When I had this issue I didn’t immediately see the split screen problem, but was unable to record or watch the channel.

Hi danm. As of noon today, April 4, 2022, WTOC is watchable via Tablo. Please check your Tablo and confirm when you have time.

Could be a station issue but nobody is there on a holiday weekend.

The issue is still the same today. I will have to call Tablo Help on Monday and see if they can help me.

If it is a station configuration issue, then it may take some time for it to get resolved (weeks?) as the station itself needs to make any needed changes.

We had a station/Tablo compatibility issue that began in March, 2022. When I switched to this channel the reception would be fine for about 10 seconds before the picture would either split horizontally, have a green grid overlay or just go dark. Attempting to record made the Tablo reboot.

It took about one month, but with a lot of back and forth with the station broadcast engineer and Tablo it was finally resolved.

Tablo insisted that the station had an encoding error and provided the exact encoding parameter to change.
The station’s broadcast engineer insisted that Tablo was not using the latest protocol but agreed to look into it.

The station farms out their encoding to another company so three companies were involved. Using Tablo’s suggestions, the station and the encoding company fixed the issue by making their signal “more backwards compatible”.

Interestingly, all of this stations sub-channels worked okay. Only the main 1080i broadcast channel was affected.

Good luck getting your issue resolved. 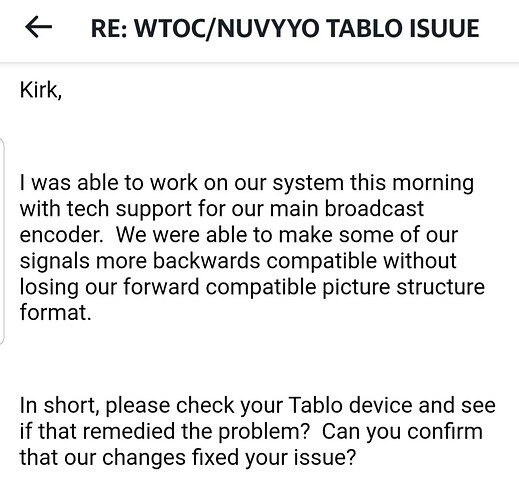 I’m having the same problem with CITY-TV but it doesn’t appear to be quite the same as the other configuration issue mentioned. Not seeing any flickering or split screen it just has a blank screen and then the Tablo reboots. Happens when I try to record something as well.

Those sound like some of the same symptoms I was experiencing.

When I select City TV to watch it live, it does not connect and offers a “Try Again” or “cancel” option. I am trying a recording this morning and will see what happens.

All other Toronto stations connect and record as usual. I am going to call Tablo Support tomorrow morning.

Pick a short program or near the end of one. When I scheduled a recording the Tablo kept rebooting because it would try to restart the recording as soon as it finished recovering from the previous reboot. Reboot loop!

I had to go into the Schedule and cancel the recording before it rebooted again.

Do all your other Toronto channels work?

Yes they do, CHCH in Hamilton too.

My Son in law who lives 5 miles from me has a Tablo dual and he can get CITY TV fine. Mine is a Tablo Quad. Perhaps it is a Tablo Model issue? Hmmmm. Hope Tablo can help tomorrow.

Interesting, I will check with a friend of mine who also has a Tablo Quad and see if he is having this problem too.

OK, my friend says his works fine but it is a 2 tuner not a Quad. However I discovered that I had both the Recording Quality and the Live TV quality set to HD1080 but when I dropped it to the middle recommended setting HD 720 5Mbps it works! You have to drop both of them to get both the Live TV and the Record functions to work. Obviously this is a bug of some kind and likely in the transmitter settings at CITY TV since all other stations work fine.

Thank you and your friend for this tip. It worked!

I am still going to call Tablo in the morning and tell them about whqt we have learned. Maybe they can contact CITY and tell them.

Good idea! I’m interested if they have encountered this one before.

I spoke to Tablo Support this morning and they had already flagged our discussion to their tech guys this morning. She said that they had never heard of this issue before and would post any resolutions to this thread after investigating it. Very helpful and grateful tech people.

Thanks for the update!