While the option to add/subtract minutes from the start/end times is appreciated, I wonder if there would be an interest in an option to start and/or end on the hour or half hour. So many of these programmers are running 1-5 minutes over the hour on shows. I think it’s just to mess with people who DVR shows.

Anyway, I would rather miss a minute or two (or five) of a show and not have the Tablo not record a following show because of a couple minute conflict. If we could have a global or even a ‘by the show’ setting to stop over runs or early starts, it might be helpful. Just a thought.

Also, is there any chance that we could get a pop up of a conflict when we start the Tablo app? I try to check weekly for conflicts but I forget sometimes.

Also, is there any chance that we could get a pop up of a conflict when we start the Tablo app?

This is like, but with the option to dismiss the notification for an hour, a day or a week cause it could get annoying like the firmware update notification if you don’t do it right away.

While you’re waiting, tablo has options to only start early or end later – here’s a hack to start late or end early, you could loose a minute on one to get an entire show…

Wow… it’s actually a very simple request and now there has to be a user manual supplied? Is it really that difficult to understand that where today you can adjust the start time to begin 2-10 mins early that the feature be expanded to allow for the start time to begin 2-10 mins later? It’s a selection that adds or subtracts time from the beginning and end of a recording. We’re not trying to land on Mars here. Just turn this [image] Into this [image]

Of course it’s not ideal. It’s relatively easy to do, well it’s a PITA, but something tablo isn’t interested implementing. I don’t have it bookmarked, there was some comment about not confusing user maybe.

Depending how important it is, APL Tablo, a 3rd party app has this function built-in. Schedule adjustment by the minute +/- both start and end times.

I actually want a 1 minute end early option now too. Check out this BS below, CTV has the show going to 10:01 which creates a recording conflict on a 2 tuner for no real reason. 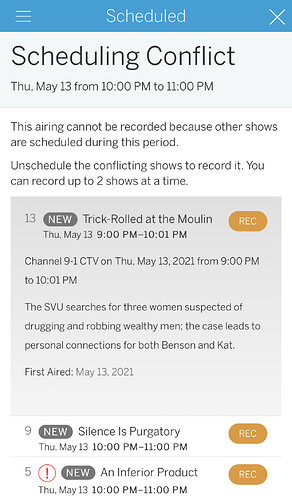 At one time, this may have been more applicable, then now?

Maybe that will be our ‘April feature’

The topic showed how to edit HTML to adjust start/end times as needed… Although, not directly addressing the ease and possibility of this feature.

I don’t know why the networks schedule programs to end 1 minute past the hour but in this case this is because of the simulcast of the next program Rebel that starts at 10:01 PM on ABC.

Grey’s Anatomy which is the program just before Rebel on ABC ends at 10:01 PM.

Not sure why since it’s already a 2h program.

What’s the deal with the programs ending 1 minute past the hour or the half hour?

The networks must have a valid reason. Not sure what that is.

The networks must have a valid reason. Not sure what that is.

To keep you from surfing away when the show ends.