Since updating to 2.2.28 channel scan stops at channel 49

Since the update to 2.2.28 , Tablo scans through the channels much faster than before and only goes from 0 to 49 instead of 0 to 69 . I lost a channel because of this .

Anybody else see that issue ?

Missing channel was found after reorienting antenna and rescanning . Channel is physically below 49 but virtually displays as 57 , hence my initial confusion .

A question remains though, why does scanning stop at 49 ? Are there no physical ATSC channels above that ?

A question remains though, why does scanning stop at 49 ? Are there no physical ATSC channels above that ?

There used to be 69 physical frequencies that channels could appear on but there are now only 51. 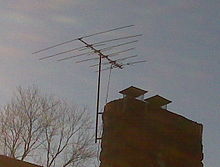 The Congressional deadline to transition to digital broadcasts was pushed back several times. Congress passed the Telecommunications Act of 1996 with the original transition date of December 31, 2006. However, the transition to digital television was set back three times: first to December 31, 2008, then to February 17, 2009, and then finally to June 12, 2009. All U.S. full-power analog TV broadcasts were required by law to end on June 12, 2009. Since March 1, 2007, all new television devices t...

And whenever the “repack” process completes – currently scheduled for July 3 – there won’t be any stations above channel 36 in the US. I have zero confidence that “repack” will actually complete by July 3, because many stations are struggling with the process.

By the way, presumably the reason that the scan shows 0-49 instead of 0-51 is that it’s probably skipping channels 1 and 37. Channel 1 went away over 70 years ago, and channel 37 has been reserved and no TV stations ever transmitted on channel 37.

Depending upon whether you’re in range of any Low Power Television (LPTV) or Translators, you may still have broadcast signals reaching you on the frequencies numbered 38 and above for awhile. Plus also if you’re near an international border (Canada or Mexico).

Low Power TV stations (Non-Class A) and Translators are independent of the phases prescribed by the FCC. Also, Canada’s repack schedule has 14 phases, with the last one concluding 1/14/2022. I didn’t seek out information about Mexico.

Regarding the US non-phased transitions: “LPTV and TV translator stations may remain on their existing channels until they are needed by repacked stations or for those stations in the 600 MHz Band until they are notified by a new 600 MHz Band licensee that it is ready to commence operations or conduct its first field application (FFA) testing.” (https://www.fcc.gov/about-fcc/fcc-initiatives/incentive-auctions/post-auction-transition)

My quick Googling isn’t finding a hard and fast end date for these frequency changes. I did find this notation about how analog broadcasting is still being allowed into next year: “12 months after the completion of the 39-month transition period, or until July 13, 2021”. (https://docs.fcc.gov/public/attachments/DOC-356300A1.pdf Specifically, bottom of the PDF page 7, numbered as page 6, in footnote 27.)

For example, in my market (West Michigan), there’s one analog still going (the 3 Angels station in Grand Rapids), using RF48. They have an approved Displacement Construction Permit to go digital on RF27, expiring in July 2021. Their analog broadcast coverage is quite small, and doesn’t reach me in eastern Kent County–so I can’t confirm if they’re still on the air now or not.

In the Traverse City, Michigan area further north, the WWTV Digital Replacement Translator (DRT) apparently is still on RF40, with a construction permit to use RF25. Seemingly the buyer of their frequency hasn’t sent them a letter with a deadline yet (which happened to at least one DRT closer to me in late 2018–causing that one to go off-the-air for a few months until the tower crew and equipment was all available). Also, I believe the one analog (WXII-LP on RF12) is still chugging along, but with an approved Digital Companion Channel Construction Permit for RF30 valid into July 2021.

You’re very correct that US “Full Service” (full power) stations and Digital Class A low powers are scheduled to be completed in the 10 phases the FCC scheduled, ending on 7/3/2020. But these other broadcast stations weren’t in scope for the Federal Government’s coordination.

So I’m not able to find chch London anymore when I scan (UHF-51), could be my antenna as I think a balun is cracked and other signal levels seem lower but I did notice it seems to only scan to 49. I know it’s set to repack at some point in the future but perhaps this restriction to 49 was a little premature?

perhaps this restriction to 49 was a little premature?

The title of this thread is a bit incorrect. We do scan up to 51.

If you scan to 51 then why does it display 49 when scanning ?

If you scan to 51 then why does it display 49 when scanning ?

By the way, presumably the reason that the scan shows 0-49 instead of 0-51 is that it’s probably skipping channels 1 and 37. Channel 1 went away over 70 years ago, and channel 37 has been reserved and no TV stations ever transmitted on channel 37.

That could be an explanation . If that is the case, the info displayed during scanning is unintentionally misleading and confusing .

I cannot get channel scan to work at all. Good news is that my 66 channels still work.

I cannot get channel scan to work at all.

Same here. Rescan fails with no channels found. The 29 channels I watch / record are still there. Both Roku and Web affected.

I don’t recall, it just didn’t show anything new. So I stopped and since the tv is working I didn’t bother trying again.