Just curious does anyone have signal quality inconsistency through out the day and or over the course of several days?

My setup is
Tablo tv 4 tuner
Antenna in attic. It’s a clear stream 4v
RCA preamp.
Line from antenna to Tablo is direct.
There is one splitter on the end to provide line to tv and one to Tablo. This didn’t see to change quality when removed.
Just sees if I scan stations sometimes it’s 5 free and sometimes are 3 orange. One station is over hundred bars and sometimes is 5 green and sometimes it’s 1 red. Not sure it changes so much.

I know attic isn’t optimal but I didn’t want to go mast outside as I already patched holes previous owner had from direct to not to mention with an HOA I knOw they can’t say. I bit no one else has one so don’t wanna be outcast lol.

I got an amazon basics flat style 17 dollar antenna to have live tv in bedroom and that has more consistency than my 100$+ amplified antenna and I refuse to accept it lol.

It’s weird Bc even when a station has 5 green on the signal via Tablo sometimes you get a few seconds pixelation to where picture is scrambled and audio is jacked and then the back. I know with air things can interfere but just odd. Just trying to figure out where the issue is.

My cord cutting has been nice but it is just mildly annoying to have those random issues with my better antenna and DVR but not with my crappy poorly hung and hidden cheap antenna.

The other day the World Series went from clear to frozen and unwatchable to watchable. It was almost out for 2 min.

I also have my antenna gps pointed.

Any advise to try would be great.

Antennas placed in attics have to be located in a “sweet spot” where all the signals converge. Typically that is one spot in an attic. Not every attic location is suitable for antenna placement. The C4 is a great antenna - have several friends who use it in their attics. Sometimes one has to search for that “sweet spot” experimentally. Otherwise the antenna can suffer from signal bouncing and overlap which results in a combination of strong and weak signals on the same frequency (the “up and down” effect). The C4 is actually one of the best attic antennas.

The larger the antenna, the less sweep it has for pointing at the broadcast towers. The C4 typically has a 60 degree sweep. Are all your stations within that range?

Is the C4 looking through any trees in the attic? Trees can cause a signal to fluctuate on windy (or even breezy) days.

Aluminum ducts and pipes in an attic can cause crazy signal reflections.

There are a few ducts which I agree could affect. Just venting I guess lol. Like I said just the up and down that drives me bonkers

That could be a sign of multipath problems when signals vary this way:

Just curious does anyone have signal quality inconsistency through out the day and or over the course of several days?

Yes.
2 of my 8 channels radically fluctuate in signal strength, and quality, throughout the day, at least, to the point where I can notice.

Yes.2 of my 8 channels radically fluctuate in signal strength, and quality, throughout the day, at least, to the point where I can notice.

I have the same problem, mate. Trying to get it adjusted before winter comes.

I have the same problem, mate. Trying to get it adjusted before winter comes.

It’s not a big deal for me.
I consider those 2 fluctuating-weak signal channels my fringe channels.
Nothing critical broadcast on those 2 channels for me.
If I get them, great, if not, no biggie.

I’m impressed I get any channels with my $18 antenna taped to my wall.

Wonder whether a $19 antenna would do just a little better?

Unfortunately the couple for me that change randomly within a 30 min show is NBC and Fox, abc does it sometimes but only on the further away station (I get two ABC ). Fox is worse for me but that one is a 13.1 and NBC is 8.1 for channel frequency. 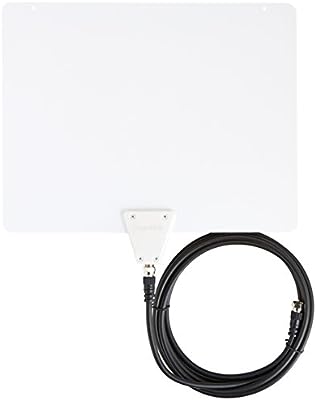 There is a difference between the two antennas: the Amazon Basic is multi-directional, the C4 is not. In which directions are your channels? Can you provide a TVFool report?

The reflector on the C4 will inhibit you from getting certain channels and attenuate others depending on the channel locations. The Amazon Basic has no such hindrance.

Here you go. The north has more channels and is closer than those to the south. My antenna is locked to that core of channels

The Amazon Basic in the attic will do better on all north and south channels together than the Clearstream 4. That is unless you remove the reflector from the Clearstream.

Yes the RCA is my pre amp.

Funny that my amazon antenna theoretically can get me a more consistent signal than my clear stream. I may buy another one , heck they are 17 bucks and plug it in in my attic with the preamp ? And see how well it does.

I would agree that the antenna is pointed at the core of that green.

RCA has multiple preamps - I was asking really was it specifically the RCA TVPRAMP1Z which has overload prevention capabilities.

If the Clearstream has a preamp on it that overloads the tuner, it will underperform the Amazon Basic. I would try the Clearstream without the preamp pointed at 30 degrees using a compass.

Putting the Amazon Basic in the attic with the preamp would get you both north and south channels. However the preamp has to be a good one like the RCA TVPRAMP1Z. Non-quality preamps may just hinder reception given their higher noise factor.

I definitely would have another go at the C4 - it is a great antenna. Point it at 35 degrees. As MarkKindle said, “without the preamp.” When a TVFool report shows an NM in the high 50’s, that is a very strong signal that shouldn’t require an amp.

The Amazon basic may do well in the attic also without an amp. Try it also in the attic. My guess is that the Amazon Basic would get you all the channels in green and yellow both north and south. If not, then try it with a good preamp - not just any preamp because as MarkKindle said, a poor preamp will only hinder reception by adding noise to the line. The RCA TVPRAMP1Z is a good one and inexpensive.

With an attic antenna you should be getting at least 30 channels (not counting sub-channels). If you split the signal multiple ways from the antenna to multiple receivers\TVs, then a distribution amp may be needed.

I’ll play around with it hopefully in the common weeks. The attic temps are slightly lower now. Hoping we actually have a winter in FL this year.