Router setup for setting Tablo programming when we are not Home

Ok so I have a century router PK1005Z and a apple Time Capsule for my WiFi. Can anyone help me out on how to setup this configuration so I can set programing when we are away from home.

@bhemp Our team would be happy to help! If you can, send us a ticket along with a screenshot of your router’s port forwarding screen. We can send along some instructions from there. 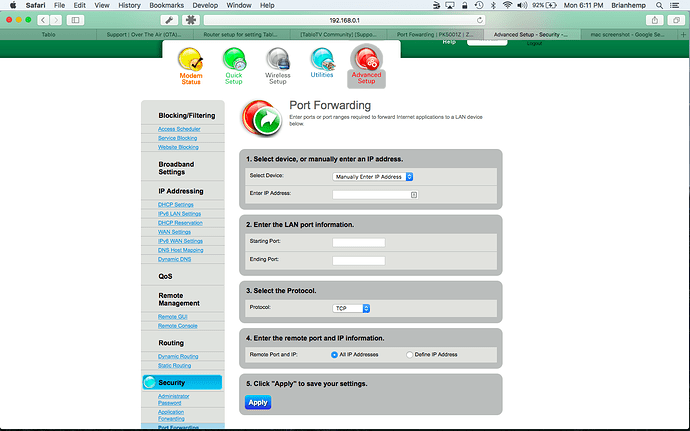 That looks a lot like my Actiontec DSL modem. If so, it doesn’t have an option to remap forwarded ports. I got around it by using an old Linksys router running dd-wrt.

Edit: I used the Linksys to do nothing but remap those two ports. Forwarded them from Actiontec to Linksys, remapped the port numbers, and forwarded again to Tablo. Justifies keeping old junk in the spare parts box?

Why can’t you put the modem in bridge mode and use the Apple TC as a router too?

I have CenturyLink dsl and a PK5001Z modem. It has a UPnP (Universal Plug and Play) choice that will set up your unit automatically - at least it set up my ip camera for me in 15 sec. (I don’t have the Tablo set up for remote) I had problems with CenturyLink and the old modem(it might have been the 1005Z, but I don’t remember) so I kept calling support and they finally sent out a tech and he set up the new 5001Z for me and it has worked very well for me. ( and no Charge - just to get me off the phone) I also use and Apple Airport Extreme for routing in bridge mode with the radio off on the 5001Z. Cheers,