ROKU Tablo channel with two Tablos in the house

I have a LITE, but I need more tuners. I want to add a QUAD, but can the ROKU Channel accept two Tablos?

Yes, but you will have to switch back and forth between the Tablos. Like a his and hers Tablos.

Depending on when you purchased your LITE you may or may not need another subscription, assuming you do want access to the 14 day guide.

I bought the lifetime guide about 5 or 6 weeks ago.

Yep you’ll need to buy another subscription if you want to run both Tablos at the same time. From the website:

“Your Tablo subscription is tied to YOU, not a specific device.

You can change or upgrade to a new Tablo DVR and keep your existing subscription.”

See link below. Guess the key question is when did you initially get your subscription on your Dual Lite? 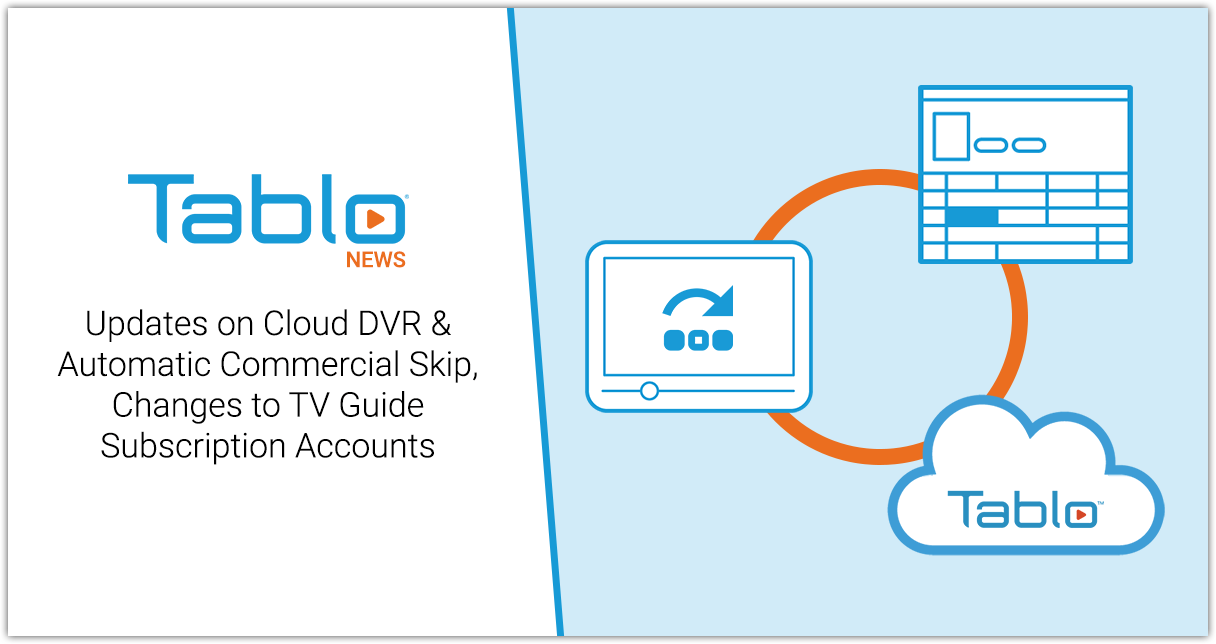 Today's post is a news update regarding changes to the structure of Tablo's TV Guide Data Subscriptions in preparation for the launch of the Cloud DVR Service, as well as the progress towards the Automatic Commercial Skip feature.

You can purchase the QUAD and transfer the subscription from the LITE to the QUAD and maybe sell the LITE. Here is some more info:

What do I get for my subscription?

Your subscription includes: Access to 14 days of TV guide data for your area as well as the ability to set recordings by series, season, or new episodes only.  Guide data includes beautiful cov...

Do I have to buy a subscription for each Tablo unit?

The subscription is tied to your account, not the Tablo device, so in the event that you need to replace or decide to upgrade your Tablo, you can swap the unit attached to your subscription. If you...

Bummer, I want the 6 tuners. Perhaps I can transfer the LIFETIME to the QUAD, and just buy the annual for the LITE.

So, on the ROKU TABLO Channel, there is an option to watch Tablo A or Tablo B on the main ROKU ULTRA? That would work for me.

Yes, you would disconnect from Tablo A and the connect to Tablo B in the Roku channel.

Thank you. I’m assuming, from your appreciated reply, that the ROKU’s Tablo Channel allows/requires choosing which Tablo’s hard drive database to look at.
I had a fair amount of trouble getting the ROKU Ultra to even “see” the first Tablo, even though they were both Ethernet wired to the same Ethernet Switch/hub. It took more than a week, between both Tablo support & Roku support… and eventually, the router, on it’s own, changed the DNS of the ROKU, and then it all worked together.

You don’t choose which “database” to connect to, you actually change the names on each Tablos. Call the Dual Lite the “OG Tablo” and the Quad “Quadritablo” for example. You then choose which Tablo device to connect to.

This is a good read. 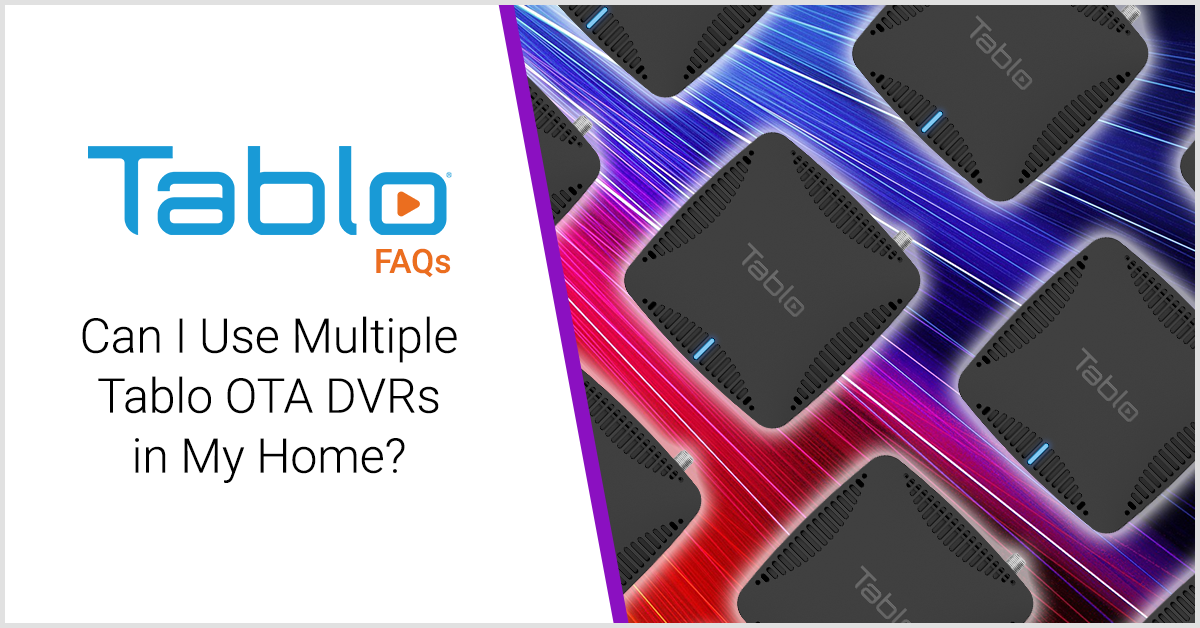 Tablo FAQs – Can I Use Multiple Tablo OTA DVRs in My Home?

It is possible to use more than one Tablo DVR within your home, and even on the same home network but there are considerations to ponder before proceeding with this setup.

Try loading both TABLO apps (Release and Beta versions) and set them to separate TABLO devices. 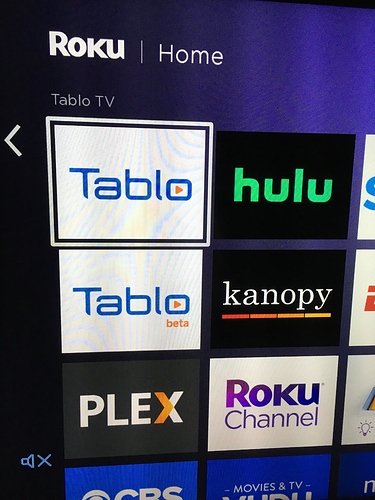 Try loading both TABLO apps (Release and Beta versions) and set them to separate TABLO devices.

Wouldn’t really recommend this as the beta can be different than the regular version and may require a firmware update that the user may not have if they’re not part of the beta team.

I personally think it’s easier to switch between Tablos in the same Roku channel rather than using the beta channel and the official channel. But then again what do I know, I don’t have 2 Tablo devices lol

Well, I do have 2 Tablos and agree with @theuser86 that switching between Tablos is easier and quicker by staying in the same Roku Tablo app.

I hope I never get to the point where it’s just to hard and stressful to disconnect from one tablo and connect to another.

Thanks for all of the suggestions in this thread. I still haven’t pulled the trigger for the Quad yet.

I saw in the TABLO RIPPER App that choosing which Tablo to connect to is easy. I didn’t know if the Roku Tablo Channel would work the same way.

I have been managing scheduling conflicts both morning and night every day with the Tablo Dual Lite, and have missed the opportunity to record some episodes of old TV shows I like. Scheduling movies is almost impossible, because of the conflicts. I intend to use the Quad for just TV series, which hopefully will reduce conflicts. Then I could use the Dual for just recording movies.

Next step is building a cheapo PLEX server, so that I can share OTA content with my kids around the country who have me connected to their PLEX servers.

Your replies and suggestions have all been appreciated. I feel good about buying the 2nd Tablo.

OK, thanks for all of the advice from you OG Tablo-ers. I just ordered a refurbished QUAD directly from my former countrymen in Ontario. (I was an original Ontario-an from 1945 to 1956). I’m wondering if the Tablo offices are located close to the Elsinore Brewery (and Insane Asylum). That’s a reference for you Strange Brew fans.

As for the hard drive, I have an 8TB WD Elements currently connected to the QUAD Lite, and another 8TB WD Elements connected to my desktop for the TABLO RIPPER to save copies to. I suppose I’ll buy a 4TB or 6TB WD for the DUAL LITE (I’ve not been happy with the Seagate externals over the years).

I’m not concerned about losing what I already have on the LITE’s HD, since I already have copies, but it would be nice if I could just plug the 8TB into the new QUAD, and keep everything there. Is there a trick to renaming the HD before I move it to the new QUAD? It is currently known as “Tablo Lite 1”. (Clunky name, but what did I know about Tablo six weeks ago?)

If not, will the Tablo Ripper “Sync” function allow me to repopulate the QUAD 8TB from the PC’s 8TB external HD?

You can move your HDD from the Dual Lite to the “new” Quad. See the link below. Make sure the Quad is factory reseted before you start the process below.

If you replace your Tablo DVR the process below will allow you to migrate your existing recordings stored on an external disk (devices with internal storage or Cloud storage are not supported) and ...

I have been managing scheduling conflicts

I have a tool
https://community.tablotv.com/t/apl-tablo-client
That allows you to manage your shows across your tablos pretty seamlessly, it still recognizes the different tablos and allows you to schedule series and such, but when you come up with a conflict, it’s just two clicks, mark the conflict to not record and mark it to record on another tablo, all on the same screen.