Hello. I’m new to Tablo. I have just cut the cord. My Tablo picked up 39 channels, of which I only care for 8 or 10 channels as favorites hence the guide. When I I schedule a show to record from the guide, does it record the series? Or do I have to re-schedule the show after 14 days? Wait, I don’t think I see a series recording option, like the DirecTV DVR!

If you go the show in the “TV Shows” guide, click on the particular show and then select the “REC” button and you have the option to record ALL shows or just NEW. The next button over will offer options on how long to keep the watched shows, start or stop early, etc.

Adding to what Steve said…

First and foremost, you can’t record series if you’re not paying for the Guide subscription.

Generally, though, most people will set up a series recording by using one of the Guide categories (Prime Time, TV, Movies, Sports, or whatever your particular Tablo app gives you). You may need to select an option in that Guide category to display the shows. Then click on the show, and you can easily record the series from there.

As Steve noted, when you record a series, you are given the choice of recording all episodes which includes reruns, or only new episodes. A caution: the Tablo has to rely on the Guide data as to whether the show is “new” or not. Occasionally, especially on shows that previously aired in other countries (Canada, UK, etc.), the guide’s idea of “new” may be different from your idea of “new,” so check the upcoming episodes to see if they look like the ones you want recorded will be recorded. (An example: if you set up to record new “Death in Paradise” episodes on PBS, you probably won’t get any episodes recorded).

And to add on to what jack said … (Thanks Jack for your excellent addition!) … if you have a show set to “Record All” and you delete it after watching it, Tablo will record it again if it comes on. That’s why I use a 8TB drive and mark shows as “Watched” as oppose to delete until the whole series is over. If it’s already on the drive, you can set it to not record duplicates and only have one instance of the show. 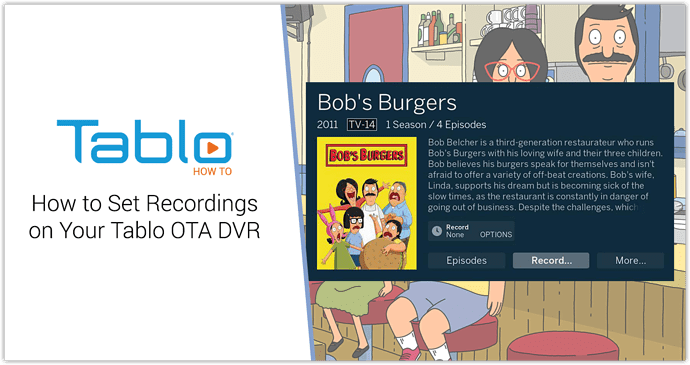 How to Set Recordings on Your Tablo OTA DVR

We’re getting back to basics today to talk about how to set recordings on your Tablo OTA DVR. Even if you think you’re a Tablo expert, we guarantee this post will help you optimize your TV recording schedules.

If I set a series recording for only 1 channel (when the show airs on multiple networks), shouldn’t the future episodes in the episode list show an orange “rec” button for that channnel’s episodes? For example, I have set up a series recording for Star Trek, but only on channel 7-2. I see two future episodes on 7-2 (They air on that channel only on Saturdays), but the “REC” button is blue. It seems to me like those should be orange. Does anyone have an explanation of what I should be seeing there? 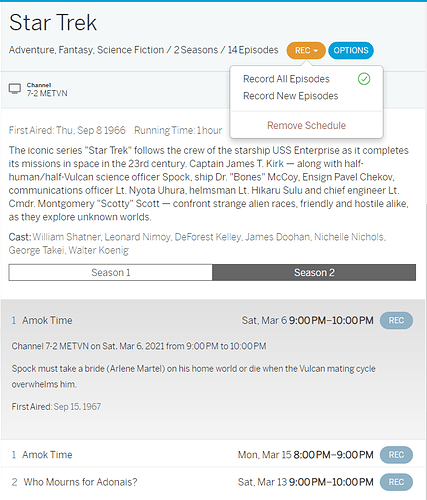 Have you checked Don’t record duplicates? and these were already recorded? (even recently if you may have deleted it)

Yes have “don’t record duplicates” checked in settings. These are future recording that I have set for the series, but specifying just that one channel. I guess my assumption is that Tablo figures out which of these should display “orange” (REC) automatically based on my criteria. I should face specified, the screenshot is the view when searching the TV category for the show.

Tablo figures out which of these should display “orange” (REC) automatically based on my criteria.

Bingo. I’d bet if you look in your Star Trek folder under recordings, that those episodes are already there.

When I go to the category “Scheduled” the channel 8-2 shows are still a blue REC button, just like the channels I’m not recording. 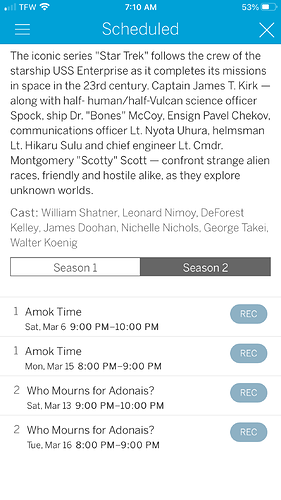 Check under “Recordings”, those episodes have likely been recorded already / previously.

You are right! When I first bought the Tablo I tried recording a bunch of shows. My subscription lapsed for a bit and I forgot these older versions from the channel I don’t want!) were there. Thanks so much. I deleted those and now the buttons are orange.

Older version of the same seasons - episodes? deleted so you can re-record them?

Yeah…i think when I first started out, I didn’t realize MeTV was broadcasting them in HD and Heroes&Icons in SD. Purging the old SD recordings to make way for the 720P versions as they come out!

Then may “broadcast” in HD (?) but you know Star Trek was never recorded in HD! So they can only truly broadcast original content with what resolution it has.

They are broadcasting the remastered HD episodes (with enhanced VFX) that were done some years ago. Because original Trek was shot on film (rather than video), HD versions were possible (and very cool!) 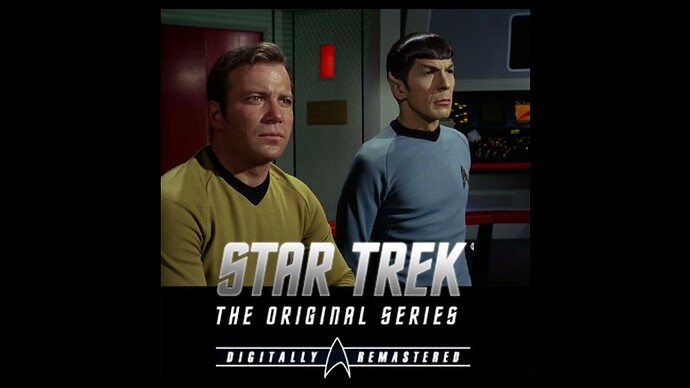 10 years ago, the 40th Anniversary of Star Trek was fast approaching. HDTV was the future. CBS knew they needed to do something to be sure the “one that started it all”, The Original Series, was ready for that future. Produced from...

WOW! ok, but now I kinda wish I didn’t know… in my area MeTV is broadcast at 480i

so I still only get the Standard Definition versions