Recording Failed Due to Weak Signal, VHF only, NOT Weak!

I’m enjoying my Tablo Dual Lite, but stumped by an issue I can’t find here in the Forum.

I have a great ClearStream VHF/UHF antenna with strong signals on all of my Seattle stations, including my VHF channels (broadcasting on Ch 9 & 11). I can view these stations using Live TV with no issues. And the Tablo tuner shows full 5 green dots.

However, more often than not, I get the “Recording failed due to weak signal” error with recordings on these two channels. My SignalScout meter shows a solid -59dBm level with 23db S/N for Ch 9, and -51dBm level with 29 S/N for Ch 11. These signals are better than some of my UHF channels that don’t have this issue.

Any ideas what’s going on? Does the Dual Lite simply have a lame VHF tuner? But why can I view these stations Live without any issues, but keep getting this recording failure?

Thanks for any help! 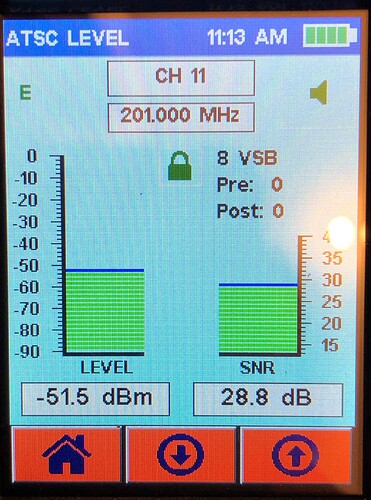 I have had the same problem. Without warning, one or more channels from the same broadcaster stops with the Tablo message the signal is too weak. Checking the signals externally they are fine and even running the Tablo scan finds the signals full strength. Resetting the Tablo has no effect. Then anywhere from an hour to the next day the problem goes away. What’s going on here?

I did hear back from Tablo Support. They asked me to put my Tablo into “remote mode” so they could download some logging information. I haven’t heard anything back yet.

I have also had a lot of failed recording ever sense the last firmware update!!!
like a week ago…

My issue has existed since I set up the Tablo back in December, so it pre-dates the recent software update. Still hoping to hear back from the factory support.

We were able to take a closer look at the Tablo and it seems the signal for channel 9 and 11 are quite strong, but they are experiencing some trouble with interference.

*Interference can come from a few sources: *

*- Multipath interference – caused by OTA signals being reflected off of items such as airplanes, wet/icy surfaces or shiny buildings *

*- Moisture – Heavy amounts of moisture in the air in the form of heavy fog, high humidity or intense rain can also weaken signals enough to fall off the digital cliff *

- LTE Interference from nearby cellular towers affecting your OTA signal

*I recommend trying an LTE filter with your antenna setup to see if it reduces or resolves the issues coming from the interference we are seeing in the signal. *

Unfortunately if the LTE filter doesn’t resolve the issue there isn’t too much that can be done about interference affecting the signal between the broadcast tower and the antenna.

I hope this helps.

I’ve ordered an LTE Filter and will try that. I also moved my Seagate drive away from the Tablo in case it’s generating interference.
https://smile.amazon.com/Philips-Interference-Pixilation-Installation-SDW1520/

You could also try rotating the antenna slight off-line from the transmitter, away from any buildings nearby that might be reflecting the signal to you.

Thanks. I doubt it’s a multipath issue. I responded back to Tablo Support because I’m puzzled why this issue only happens on recordings. I never see any pixelation or reception issues when viewing the Tablo’s Live TV.

I agree why would it only show up when you were recording. Or for that matter doesn’t show up when I switch the TV directly to the antenna input?

I’m having a similar problem, same area. BTW, the recording feature uses up a bunch of extra bandwidth if you have the “skip ad’s” function set up. I would try disabling it and see if it improves.

My problem is a little different and I’m having trouble diagnosing it. I have Tablo Quad HDMI, LAN connected on my main TV. I’m using Roku to bring it all together with my streaming apps. The Roku is also LAN connected on the main TV, and wifi is used for (2) satellite TV’s. On the satellite TV’s I get message “Antenna strength too weak” when trying to view the major networks in HD. I can go to the main TV, and using Tablo only everything comes in just fine.
My internet is Fios 50/50, and I typically see at least 46 Mbps down and 45M bandwidth on my Wifi, even at the remote locations. Is this a Wifi issue, or an antenna issue? I purchased a really good antenna which is mounted in the attic, and TV reception from it directly is fantastic. I added a signal amplifier /8-way splitter to get cable throughout the house, and it works very well.

I’m having the same issue with Dual Tuner HDMI. The signal scan shows 5 green dots, and I never see any problem when watching live. But the recordings fail with weak signal.

Update:
Solved my problem by adding a High VHF antenna to my existing ClearStream VHF/UHF antenna. Even though those channels showed 5 green dots on the Tablo, I think that it boosted the signal level enough to overcome the “Recording Failed” problem. I don’t think it was any sort of interference issue. Perhaps the Tablo tuner is a bit too generous in assigning 5 green dots to stations that are a bit too weak?

We were having the Same Problem with the blue spinning circle, or Tablo put of a “weak signal” screen and took itself off of the channel we were watching only to have to hit “Retry” for the station to come back on, etc.
We were told the same things like weak signal, check antenna, defective coaxial cable, etc. etc. etc. and, Unfortunately, we tried every suggestion.
We FINALLY found the problem. We removed the Tablo box and replaced it with another name brand tuner/recorder and now Everything is working exactly the way that it should…no more spinning circles…no more weak signal warnings…no more rebooting…ahhhhhhh…Our TV is working and recording perfectly.
We’re just stuck with a $150 Tablo Recorder that doesn’t do what it was supposed to do…

*Tablo has a 30-day return policy and it’s official retailers have similar.
*There’s a market for old/used or unwanted Tablo’s on ebay and similar services.

You shouldn’t have to feel “stuck”, visiting support forums for out-of-service devices.

Trying ALL of the Tablo ‘solutions’ has put us well past the 30-day return policy.
A “30 day warranty”!<<<That sounds like a joke in itself…[;-D)
And, unfortunately, trying to sell someone else a device that we have Proven is defective is not in our moral nature. Therefore, the word “stuck” that I used was very accurate.
IF, someday in the future, Tablo fixes its software to just KEEP the device ‘on channel’ and not go into warning screens or spinning circles, this box MAY work as it was supposed to…I hope.
However, in the mean time, it is useless.

“…trying to sell someone else a device that we have Proven is defective is not in our moral nature.”

As long as you disclose that there are some problems with this device, you are not deceiving anyone. Getting some $$ for this is better than nothing at all. (and one less thing to collect dust)
Just my 2 cents worth.

Thanks, DrJack, for the double cents but you would have to wonder WHY would someone pay anything for a product that was proved defective?
LOL…But you are probably right; there is one born every day…[;-D)

And, unfortunately, trying to sell someone else a device that we have Proven is defective is not in our moral nature.

Defective vs not working in your environment. It wasn’t getting any channels?

IF, someday in the future, Tablo fixes its software to just KEEP the device ‘on channel’ and not go into warning screens or spinning circles, this box MAY work as it was supposed to

There are hundreds of thousands of tablo’s in service with the same software… functioning just fine. So it’s unlikely this is the problem, claiming your device is defective due to software… because of reception issues.

As long as you disclose that there are some problems with this device, you are not deceiving anyone.

Correct - check the box “Not working / For Parts” then explain… it’s what you call defective, but it’s just because it didn’t work right for you. Operator error isn’t proof of a defect, in the device.

There IS the possibility it may work going through the internet. When we first purchased it, Tablo worked for the 1st month of the free service.
When we cancelled, or didn’t want, the paid service, we started having all of the problems.
We just wanted to connect the antenna to the Tablo and the Tablo to the TV…Simple.
But most of the time you couldn’t even watch a program (not record), couldn’t even watch because it would Constantly put up a warning screen and you had to click re-try and the show would come back on for awhile.

Like I said, the new tuner/recorder works Perfectly so I Know all connections and antenna are just fine.

I’ve disconnected the Tablo so no need for more advice (We’ve been getting advice for Months now and have tried everything you can think of).
Perhaps some months into the future, we’ll connect the Tablo again and see if there were any improvements made to the software that will just KEEP on the channel you are watching without going to some subroutine of a warning screen or back to guide.
Thanks For Trying…We appreciate it but we are done.