Recording a program already being watched on Tablo

I was recently watching a show, and had been watching it on the Tablo Quad via the Apple TV, and the progress bar on the Apple TV showed the cache still showed that it was capable of going back to the beginning.

I thought it would be good to record the show, so I programmed it from my iPhone app. The resulting recording I got did not start from the beginning of the show even though it seems to me that it could have since one of the tuners on the DVR was already in the process of watching it and therefore I would think the recording could have included everything that it had still in the cache, but the recording only started from the moment I told it to begin recording the show.

Is there some reason why it can’t grab all of the cache it had and include that in the recording, so that it would effectively be able to present the entire program even though you told it to begin recording the show 10-15 minutes after it had already started?

I appreciate your feedback.

Loving my decision to cut the cord!!!

This is my speculation, and I’m sure there’s some technical gobbledygook involved as well.
You clicked to watch a “channel” from the perspective of the tablo - not specifically a show. So it doesn’t have all the DB data associated with the streaming data. This is my understanding how it works and/or designed.

I can easily follow your logic - yea, sure why not. However when I click to watch a live show, I see a new directory in /pvr/XX named same as associated with /guide/channels/XX telling me it’s not “recording” a show in as much as a channel - technically.

But, I’m neither a developer or technician… so what do I know.

Alas, that’s not the way the Tablo is architected at the moment.

Yes, we do capture the live stream so you can rewind, pause, etc. but at the moment there isn’t a way to gather that up and create a recording out of it.

Having a recording option when watching live that would start at the beginning of the viewing session is getting to be a semi-popular request and we have had some initial discussions about how we might make that happen, however it’s not something that has been popular enough for us to get serious about adding it as of yet.

Also, if you have set up to record a show and are watching it Live as well, and if you pause for any reason, once the show ends in real time your playback is completely lost. It tries to jump to the start, then, back, can’t scrub, puts up nonsensical time markers, and just generally bombs. I can make this happen consistently in this case with Apple TV. The only option is to get out of Live and start from the beginning on your recording. Of course, if this is a sports event that ran over and that’s why you are watching live…you’re screwed. It loses anything in the live stream past the scheduled end. Tivo does this perfectly.

I just a Tablo Dual Lite in an attempt to convert my wife from her Tivo. This and the live TV change speed will likely be the death of the attempt. It is extremely convenient when watching a show that you didn’t explicitly plan and realize you’d like to keep what you’e already watched. On Tivo you simply press record and it stores the previously recorded buffer and creates a new show recording.

I didn’t know that existed! The only bummer is that the Roku is no longer the only window to our entertainment. The single input, single remote was workong quite well.

You can stream to the Roku from the Tablo DUAL HDMI as well, you just need to have a valid subscription.

they do note streaming from HDMI streaming, if not wired, needs a “strong” wifi network as it doesn’t transcode down the recordings
(I may have missed the technical terminology there, but the networking is worth noting)

Why does one require a “strong” WiFi connection?

Read the link below. It is because the video bitrate is significantly higher. I quote:

To deliver this video without buffering over WiFi, a strong home network is required.

For the best experience, connect your Tablo and/or your streaming devices/Smart TVs to your network via Ethernet where possible.”

“Raw MPEG2 Video
As a TV-connected OTA DVR, Tablo DUAL HDMI records and displays Over-the-Air TV in raw MPEG2 video format at the resolution and bitrate in which it is broadcast, including 1080i @60fps, where available.

This means you can squeeze about 130 hours of HDTV recording on to a 1TB drive, versus up to 700 for a network-connected Tablo, which optimizes the video for streaming and storage.” 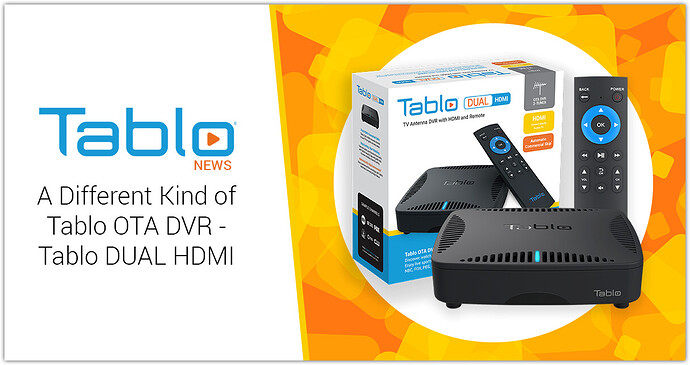 Is there an official distinction

of course!! If you think someone is making something up or mis-informing you – at the top of every tablotv.com page is a search box
Search results for: hdmi streaming

If you want to find your own technical answers, tablo has an extensive - Welcome to the Tablo Knowledge Base – Tablo library of articles. Search for most anything “HDMI streaming” for example.

Once set up on your primary television, Tablo DUAL HDMI can stream live and recorded antenna TV on up to two secondary televisions in your home without the need for additional proprietary hardware....

They make it easy to find things for yourself especially if you think someone is making something up (or you just don’t like their answer).

Thanks! There’s some good info in there. That’s unfortunate about the device restriction on the HDMI unit. The single most important use case for the Tablo purchase was being able to send live TV to a kitchen iPad. Replacing our Tivo was a bonus.

On a related note, we’ve just discovered the lack of fast forward / rewind thumbnails on incomplete recordings and live TV. Is this different on the HDMI Tablo due to its lack of transcoding? Or does it also wait for recording completion before adding them?

It’s pretty common for us to watch shows 30 minutes after they start or scrub around shows that are still in progress. It’s been a bit tricky to time the commercial breaks without being able to see the frames.

I’m guessing the end-game for us will be keeping our Tivo for its ease of use, and keeping the Dual Lite only for the “little screens”. Hopefully some of these things improve at some point and I can take another stab at this!

Thanks for all the feedback, this community seems really responsive and helpful.

we’ve just discovered the lack of fast forward / rewind thumbnails on incomplete recordings and live TV. Is this different on the HDMI Tablo due to its lack of transcoding? Or does it also wait for recording completion before adding them?

This I’m not sure about, interesting question. In theory it should be possible given no transcoding.

Wow, I wish I knew about the option for the TV-connected Tablo last week when I purchased my regular Tablo. This has really been a learning process with how all of this cable-cutting works. I didn’t realize that with the regular Tablo, I was basically swapping one cord for another. Fortunately, my internet provides unlimited usage for about $70 a month, so I guess I’ll be okay. But if they ever decide to wise up and start rationing my internet, I might consider switching to this TV-connected model.

As for the original topic that drew me into this thread, I was just going to comment that when I’m in the middle of watching a program and decide I want to record it, I just rewind back to the beginning and then select Record, and it manages to capture the entire program. One thing that I feel is missing from the software is the ability to simply press Record while you’re watching a show, instead of having to click the back button to the screen where you can select to record the show. That seems a bit clunky. Maybe just a little red Record button that could show up when you press the Pause button, somewhere near the blue progress bar.

Fortunately, my internet provides unlimited usage for about $70 a month, so I guess I’ll be okay.

You don’t properly understand how the network connected DVR works. Streaming within your house does not use your external internet connection, it just uses your local network. Local streaming in your house doesn’t increase your data usage on your internet, it’s “free”.

The minor use by Nuvyyo (Tablo) using Internet is for guide, updates and maintenance tasks, the bigger Internet user is on the device upload side for thumbnail generation and commercial skip (add on).

Thumbnail generation doesn’t use your internet.

@Laptopdog read the link below. 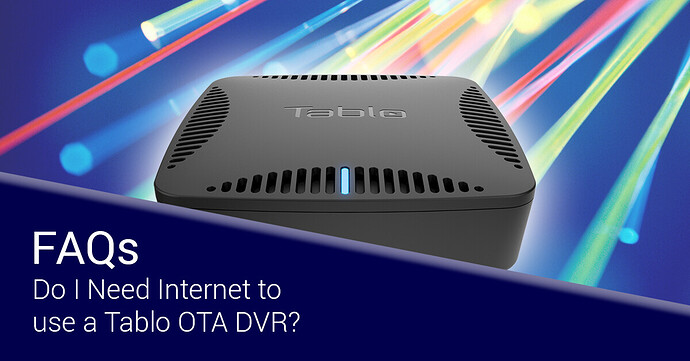 Thanks for clearing that up, theuser86!
As I mentioned before, I’m new to this stuff and doing my best to wrap my brain around how all this works. It did confuse me as to why the antenna signal coming into my home would need to run through my internet (thinking it would greatly jack up my usage) but now I understand that it’s all just a connectivity thing (and to keep everything updated). That’s really good to know.
I appreciate the help.

In the end, you’re right, swapping one wire for another, as you can’t watch your free OTA recordings without paying for internet.

“Cord cutting” doesn’t have a specific detonation and has different meaning or degrees to different users.

If it suits your needs, and comfortable with things - welcome to the sometimes cumbersome world if cord cutting