Been researching powerline for a few weeks now…for the use of simply connecting a roku directly to the router how “much” powerline adapter do I need to buy? “Much” meaning how fast should it support?

I know the speeds on the box are nowhere near their real world speeds and that can also be affected by noise in the power lines, copper quality, how many breakers it’s jumping, etc.

But with all the different brands and vairying tests, MIMO, SISO, etc…I’m drowning in what I really need.

Is one of the cheaper AV500 rated devices sufficient? Or should I stay with a top of the line (in speed ratings) and look at the AV1200.

Make sure you get at least the Home Plug AV2 standard, it works a lot better. Avoid the older AV standard. That’s all.

After 36 hours of tests, we think the best powerline networking adapter for most people is the TP-Link AV2000 2-Port Gigabit Passthrough Powerline Starter Kit.

Thanks I’ve read all/both of those - good info.

The one I linked above is AV2 and CNET states that in it’s testing it could sustain “about 250Mbps”.

I liked that one because it was pretty small in comparison to the others…and at $40 I’m not sure I can beat it.

Using 5 of the TP-Link AV2 Nano adapters here. According to the monitoring software (included), my speeds range from 250 mbs down to 11 mbs, depending on which phase the particular outlet is on, and what other appliances are running in the house. The Tablo sits on the adapter that usually reports 11mbs, but has worked flawlessly with wired and wifi Roku units, an IPad, 2 Android tablets and my cell phone (away from the house.)

When I run Speedtest.net or speedof.me to check speed out to and back from the internet, all adapters reports 30 mbs down and 6 mbs up – which is exactly the speed I pay for. (Bottom line: I don’t much trust the monitoring software anymore!)

If you’re going with multiple units, stay within the same manufacturer, though. I also have some Zyxel AV2 units and the interconnection between the two different makes is very, very spotty, and performance suffers. We have had out Tablo about a month and have pulled two different programs from the box on several occassions (720p, 3mbs) with no problems. (My TVs only “do” 720p, so no need to record in a higher format.) We’ve also had no problems, save some initial LPW with live tv. Once the wireless Roku 1 has done the LPW 3 times, it works fine. YMMV on this one, though, as this is an old, small CRT tv in the kitchen, inches away from some undercabinet flourescent lamps.

I use the Nano AV500 units here and they work great… though i’d never tell anyone to not get the faster units if its within their budget. 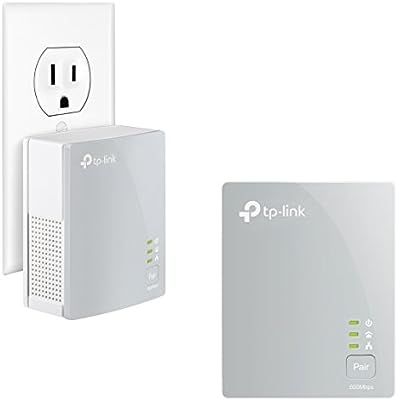 Using advanced Home Plug AV technology, TL-PA4010 KIT provides users with stable, high-speed data transfer rates of up to 600Mbps on a line length of up to 300 meters. With speed of up to 600Mbps, TL- ...

you’re going with multiple units, stay within the same manufacturer, though.

Also one should note that if you mix speeds… i.e. the 500mbps and 1200 mbps your speed will be limited to the slowest powerline adaptor you are using … so also stick with all the same speed rated units as well.

I use TP Link powerline adapters. The actual speed you get will be affected by the wiring in your house. I get 34mbs upload and download at the adapter where my Tablo is hooked up even though I have 150/150 internet service. It is still plenty for streaming and a really convenient way to get internet on the other side of the house without interference from the neighbors wifi.

Have you considered a wireless bridging device? I only ask because so often there can be so much noise through the powerline generated by your av equipment and appliances. I’ve personally never had particularly great reliability with that concept. Plus I use home automation lighting that communicates over powerline and while different frequencies they tend to overlap sometimes and make both systems slow down.

I’m using a NETGEAR Powerline 500 for my PS4 because the PS4 only supports 802.11n Wi-Fi. My speed is ever so slighter better with the adapter than with Wi-Fi on the PS4. With 802.11ac Wi-Fi though, I’m certain the Wi-Fi speed would be far superior.