Just to clarify, I have this setting checked, but I need to make sure I understand what it’s actually doing. For example, I get two CBS affiliates from two different nearby cities. If I record 2 Broke Girls, the tablo properly only records one of those duplicate airings that are simultaneous on two different channels. This is a desired result of the “don’t record duplicate settings” and what I would prefer.

In another example, I ask my tablo to record “all episodes” of The Drew Carey Show that runs heavily in reruns on the Laff Channel. I cannot choose “new recordings” only, as none of them are new, so I have to choose “all” or nothing would record ever. Basically the goal is to just collect the whole series. Unfortunately, over the course of weeks/months as I’m collecting episodes, it has now started to collect many, many duplicates of the same episodes. However, it’s not 100% consistent, sometimes it will record duplicate reruns, other times it will act smarter and skip duplicate reruns that have already been recorded. It’s completely hit or miss.

Do I have a problem here, or is the tablo acting properly? Is the “don’t record duplicates” designed only to affect simultaneous duplicates on the same channel? Or is it supposed to help with avoiding duplicate reruns, and I’m just seeing a malfunction? Thanks!

Or is it supposed to help with avoiding duplicate reruns, and I’m just seeing a malfunction?

I thought this was the intent. Your story paints a different picture.

If helpful, here is a screenshot displaying the undesired behavior, I don’t need multiple copies of the same episode obviously. There is no known workaround, as I already have “don’t record duplicates selected,” and if I choose “new” recordings only, it will record nothing, as I want to collect one copy of every rerun. My guess is that I have perhaps just uncovered a design flaw and need to make a feature request, but was hoping someone might agree they see the same behavior as I do. 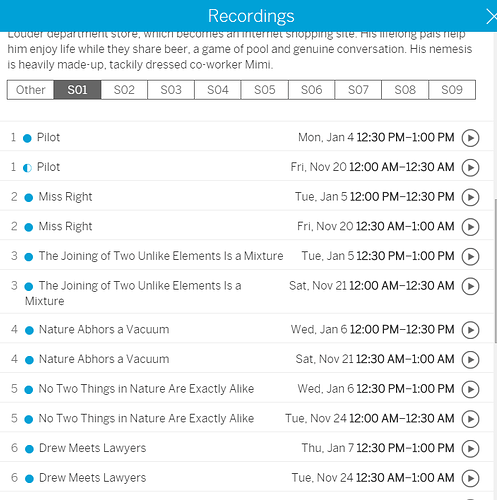 @bmslynch - It shouldn’t matter whether you have record all or record new… In the best case scenario you should not be getting duplicates.

To find out exactly what’s happening on your case, we’d need to log on to your unit.

Pop us a note and we can get this process started: http://support.tablotv.com/hc/en-us/requests/new

I also recorded the The Drew Carey Show on the Laff Channel and had the same behaviour. No other issues with duplicates on other channels. In my case, I’m on the edge of the Laff broadcast range and the channel does not always come in 100%. About 25% of the records where not complete.

If this applies to you, have a look at the recordings, they are likely not exactly the same length or size.

I’m up to season 6, totally forgot how funny the show is!

Slightly off topic but not worthy of its own topic: I’m curious about something, not complaining either way but just wanting to understand what to expect and to decide whether it’s worth actively deleting watched episodes to control disk space. If an episode records and I watch it, then delete it, then it’s broadcast again, am I correct that it will be recorded again? In other words, is Tablo retaining information about deliberately deleted episodes hidden in its database? I suspect not- and that the episode will record again in that case.

If an episode records and I watch it, then delete it, then it’s broadcast again, am I correct that it will be recorded again?

Yes, that is correct. Tablo will check the database to see if that recording exists before scheduling it to record.

I had this problem with Father Brown. Tablo support looked into it and determined that the guide was incorrectly flagging the episodes as a “Special” which causes it to record even if it is a duplicate because most specials do not air in repeats (better to err on the side of recording too much than missing something). So this is another cause that could trigger this to happen. Here is a link to the thread discussing it: Record New is recording all and multiple copies of new

I have this issue as well but only with two shows–NBC Early Today and NBC Nightly News. All other shows record properly. Also, is there any way to select a preferred station if two affiliates of the same network are within range of the antenna?

I have a 4 tuner Tablo, on the rare occasions when it works, it ties up two tuners to record the same show twice that is aired at the same time. This happened again today.

There also needs to be an easier way to bulk delete recordings. Especially since most of my recordings are trash.

I have a 4 tuner Tablo, on the rare occasions when it works, it ties up two tuners to record the same show twice that is aired at the same time. This happened again today.

Sorry to hear that - can you pop a note to our support team so we can get things working correctly for you? http://support.tablotv.com/hc/en-us/requests/new

It’s October and it still doesn’t work. Support has been less the. Helpful always pointing blame at me or my hard drives, my antenna, anything and everything except their device.

They have refused to replace the unit, refused to help with the non-working remote access. Basically not giving a damn about the device working. I’m glad I contributed to your wallets while draining mine for this piece of crap.