I just purchased a Tablo and out of the box I noticed it would not pick up all channels the TV’s tuner would. I figured it was an sensitivity issue with the Tablo tuner and accepted the missing channels. Later in the week I noticed the channels dropping(bad signal) so I did a reboot of the Tablo which seemed to correct that issue. Now it appears I am loosing channels and doing a rescan on networks it will not pick up all of the original channels it had(less channels now). I thought it may be a splitter/booster issue and took it out and hooked the Tablo directly to the antenna’s rotor box and it had gotten worse. I hooked everything back the way I had initially and proceeded to unhook the antenna cable from the back of theTablo and moved it strait to my TV and did a scan and the TV had picked up all of the missing channels and then some and also had a signal of 100% on most missing Tablo channels. Putting the cable back to the Tablo, I got the same thing(poor reception). I also proceeded to do a 30 30 30 hard reset on the unit and it fell back to the previous firmware and tried this ignoring the update and still got the same reduced channels as I did with the firmware upgrade. Don’t know where to go from here aside getting a test Tablo to see if the unit is faulty.

The Tablo has an internal 4-way splitter which causes some signal degradation. If you’re on the digital cliff in terms of signal level, this can cause a lot of issues.

Hello theuser86, the Tablo I am using is the 2-tuner version. From my understanding the 2-tuner Tablo does not have a internal amp. The antenna is a WA-2608. The cable is 20’. There is one amplified splitter TWC had left I am using after the antenna booster. I tried to use the Tablo without the TWC booster and signal was worse(less channels). The coax is what TWC left (dont know the specs) behind and is used after the antenna rotor. I did open a support ticket and was given the basics to check.

The coax is what TWC left (dont know the specs) behind and is used after the antenna rotor. I did open a support ticket and was given the basics to check.

Any chance you’ve got your own coax you can try instead?

I am still confused with your setup. You have an “antenna booster” in line AND an amplified splitter in line? Two devices which amplify the signal cause also introduce too much noise into the signal which can cause issues.

Please explain how the coaxial cable connects from the antenna to the Tablo. Is it one physical cable, or do you have couplers joining multiple cables?

Any chance you’ve got your own coax you can try instead?
Yes, I have tried store bought coax. Same results.

I am still confused with your setup. You have an “antenna booster” in line AND an amplified splitter in line?
Yes, but as mentioned, I took it out and hooked directly to the antenna and received worse results(less channels).

Please explain how the coaxial cable connects from the antenna to the Tablo. Is it one physical cable, or do you have couplers joining multiple cables?

The cable is connected on one end to the out of the antenna box/amplifier. The other end (3’ cable) connects to a powered splitter that came from TWC. Then 3 outputs(outputs from TWC splitter), one goes to the Tablo the other two goes to the TVs in the house. The cable to the Tablo is one cable, no splices, cuts, or adapters. As mentioned, I pulled the cable from in back of the Tablo and hooked it to the TV and the cable preformed wonderfully. Was able to get all the channels I had on the other cable also coming from the TWC splitter. Most of the channels were at 100% signal strength. Note:(also noticed the Tablo does not like chrome on windows 10. Constantly reconnects.)

Also, this powered TWC splitter may not be the correct “distribution amplifier” for OTA ATSC signal. Cable TV (from TWC) is broadcasted at a different frequency over the coaxial cable than OTA ATSC TV, so it may be incorrectly amplifying the signal. All these reasons can put you on the digital cliff, see link below for what this is and what it means.

Ideally, you want the pre-amplifier at the antenna mast, which means it is within a few feet for the physical antenna (so yes it is usually outside with the antenna, not indoors). Ideally, you also want one physical cable all the way from the pre-amp to the Tablo - no couplers, splitters, etc. The antenna is a WA-2608(you can look it up) which comes with a built-in rotor/amp and cord. As I mentioned in this thread, I removed all devices and spliters and still getting bad reception. I would agree with you if this config did not work on my other devices. The TVs work great with this setup. Could they work better, yes I agree, there is always room for improvement. What I don’t understand is the Tablo should at least pick up most if not all of these channels as the TVs. 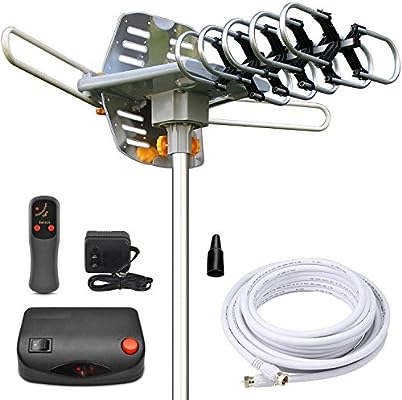 You have 2 different splitters in line before the Tablo. I understand that you tried it already without the TWC splitter and it was worse, which shows you the signal coming out of the Rotor control box is already poor. The HDTV tuner may be able to handle the noise in the signal from being split twice and amplified, but the Tablo tuner again splits the signal before it receives it. This is one of those cases where it does sound like you’re on the digital cliff in terms of signal and then Tablo splitter just knocks it down to where you can’t receive the channels. Tablo Support can confirm this by remoting in to your Tablo. My suggestion would be to improve your OTA signal strength which make require re-aiming your antenna as it is quite directional, or actually replacing it with a bigger antenna.

What is your zip code? What does www.tvfool.com say you should be able to receive? How far from the towers are you? I suggest Winegard FL6550A antenna. Look it up on Amazon and read reviews. I have Winegard FL5500A indoor and is awesome. Also see http://www.antennaweb.org

I use antenna point. It appears to be more accurate in my area. Here is a link to the results. http://www.antennapoint.com/antennas/show?id=45365&commit=Search

Although theuser86 has some good points, I did mention in the thread I hooked the TV directly to the antenna it was receiving the channels as referenced in the link above when switched to the Tablo(by itself) I get about half or less than half the channels. I don’t have issues with the TV reception just the Tablo. This antenna is directional, but does have a good signal on the back side.

This sure sound like what the @theuser86 described; the Tablo has an internal splitter so the signal gets degraded.

Although theuser86 has some good points, I did mention in the thread I hooked the TV directly to the antenna it was receiving the channels as referenced in the link above when switched to the Tablo(by itself) I get about half or less than half the channels.

I can agree with this comment. This sure sound like what the @theuser86 described; the Tablo has an internal splitter so the signal gets degraded.

I didn’t know when I purchased a Tablo the signal for this unit would be degraded in half or less. Knowing this information from the start would have changed my decision to purchase this product.

2 tuner here and I tested with my coax cable directly to tablo and split between my TV / Tablo.

Both gives the same exact result as far as signal quality goes / channel lineup, I tested it thoroughly.

I think your issues are due to your signal amplifiers, I tried one and it did really screw up my channels reception.

If the tuner in this unit is faulty, without a second device(Tablo) to test I can not determine a definitive answer to the cause. I do know all of my other sets do work with the current hardware configuration.

Open a ticket and they can check remotely

Any DVR that has more than one tuner has an internal splitter which will result in signal degradation. If you bought a TiVo, it would do that same.

The Tablo Dual tuner has an internal 1x4 splitter that is amplified to minimize signal loss. However, given your multiple splitters and what I suspect is fringe signal to begin with, this is why you’re having issues.

Again, Tablo can check signal levels for you to confirm.

@jrock Foks here are correct - we can test your Tablo more in-depth on our end with a remote session. Feel free to request this in your ticket, or you can PM your ticket number and I’ll get the ball rolling.

This new unit will alleviate the question of the Tablo. I believe there will be some signal degradation but the impact should be minimal as jayeffgee mentioned in this thread.