I recently purchased the 4 tuner Tablo and was quite thrilled with how easy it was to get it up and running. Everything seemed to to be working without a hitch. Then I started to watch a recorded show, and realized how disappointing the audio quality is! I knew from reading the forums not to expect 5.1 surround sound and that the unit can only do 2.0 stereo, but even the stereo quality seems to be low resolution. Even my wife commented on the poor audio quality. It sounds like a low bitrate MP3 file with all kinds of compression artifacts, and a compressed dynamic range. The audio actually sounds somewhat muffled and muddy, and the compression artifacts are very evident with “s” sounds from spoken voices. Compared to watching a live broadcast through the TV tuner, it is night and day clarity and quality difference in the audio. The picture quality is actually quite good, and honestly, the audio quality really detracts from the complete experience. The audio quality is poor equally on all recordings and all channels, even on live TV though the Tablo.

I have the video quality set to record at 10mbps, but have also tried all of the other quality settings with no obvious effect on the audio quality. I am primarily watching though the Tablo app on a 4th generation Apple TV hooked up to an AV receiver, all through HDMI connections. The network connections are all Ethernet CAT 5 from the Tablo to the router and the Apple TV to the router. I have also tried my other 4th generation Apple TV hooked up to another TV with the same experience, and the low audio quality was evident event though the TV speakers (no AV receiver). I even tried watching on my iPad, and could even hear the artifacts through the iPad’s built in speaker.

Is there anything I’m missing with adjusting settings on the Tablo? All of my channels have excellent signal quality, and I’m using the recommended WD Elements external hard drive. I really want to like the Tablo, but I get far better audio quality from the same shows on Hulu and from watching live TV via its built in tuner. Is anyone else having a similar experience?

I can’t be of much help except to saying using a Shield TV on our main TV and a Roku 3 on our bedroom TV I can’t say we’ve noticed any audio issues like you described and I run FOH audio on the weekends so my attention to audio is generally more than most people.

Having said this, maybe there is something on Apple devices configuration-wise that another Apple user can point out. That or I guess there is a chance you could have an issue with your unit.

Sounds like you are doing everything right as far as being wired, etc.

See the other thread titled “Sound playback on recordings is skipping since last firmware”. Could your problem be related to an sound issue when the closed captions is turned on?

I did try turning on and off the closed captioning with no effect on the audio quality, so I don’t think it’s related to the sound skipping problem.

Does anyone know what bitrate the Tablo is using when encoding the AAC audio stream? To me, it sounds like the AAC encoder is using a low bitrate or possibly also a low sampling rate, as it sounds like the upper end is missing. It just flat out sounds over compressed. This might not be as evident on speakers built into the TV for most, but playing through an AV receiver with good speakers makes it quite evident.

I will note that I do not have any issues with other sources through the same Apple TV and receiver. Hulu, Netflix, PS Vue, etc. all have great sound quality, and even my wife commented that the Hulu versions of shows have much better sound quality than the exact same show recorded on the Tablo, and she is not one to normally even notice. To me, this puts the problem somewhere in the Tablo chain, either somewhere in the firmware/hardware encoders or in the playback software via Apple devices. I will also note that the audio quality is decreased on ALL channels regardless of the broadcast format, both 720p and 1080i channels. My channels all come in with excellent signal strength, and the picture quality is excellent.

Anyone else having a similar experience? I guess it’s possible I got a bad unit, or that maybe my expectations are too high

Unfortunately, I run a pretty much Apple exclusive household, so I don’t have any other manufacturer’s streaming devices to try.

Also hoping that maybe the support folks from Tablo can chime in!

I know this is stretch, but maybe there is a problem with the hard wired connection from the Tablo to the Router. Maybe try powering-off the Tablo; disconnect the Ethernet cable from the Tablo; and then restart the Tablo on the Wireless LAN. Then see if there is any difference in the audio.

I analyzed one of my tv shows that I had moved to my computer. I used Mediainfo for the analysis. Hope this helps.

This is why I dropped Tablo about a year ago and switched to HDHomeRun DVR. Tablo definitely over-compresses the audio stream. Stereo doesn’t bother me, but low bitrate-sounding audio does. It’s really crazy to me that Tablo is for slinging HD video around, but it’s the audio stream that gets compromised to save bandwidth. A shame this hasn’t been improved yet.

Newtv, if possible, use the tablo ripper program to bring a saved show to your pc and see if the audio is bad on your pc.

Does Tablo Ripper actually pull a show bit for bit in the format Tablo records, or does it do its own encoding? I suspect it does the latter, in which case I would think that the 255kbps AAC stream is a re-encode of the actual Tablo audio stream. That would be just like taking an MP3 that is 64kbps and converting it to 256kbps AAC-- it would still sound like a 64kbps MP3, since all of this is lossy compression and you can’t get back data that was already discarded by the first compression.

I wish the folks from Tablo support would tell us the audio compression scheme that the box uses (format, bitrate, sampling rate, etc.) as that would confirm my suspicions that they are using a low bitrate and/or sampling rate. This might be a limitation of the chip that does the audio encoding, or perhaps is a setting that they could change via firmware update.

That being said, I will give Tablo Ripper a try and see what the quality on the computer is like. I find it odd that a few others are having similar come,aunts about the audio quality. Perhaps the difference in playback equipment means some folks notice the compression more than others?

When I looked at those numbers, that is what I thought too.

Maybe he didn’t mean “compressed” but possibly “dumbed down” from 5.1? (just guessing)

By default TabloRipper ‘copies’ recordings unchanged from your Tablo. The actual work is performed by FFMPEG, and you can modify its parameters if you’d like to experiment.

Maybe he didn’t mean “compressed” but possibly “dumbed down” from 5.1? (just guessing)

OTA signals always offer a 2 channel audio feed and that is what the tablo uses.

I have had my Tablo for right at a year now & I use it on 4 different TV’s throughout my home. Two simply utilize the TV speakers, one has a soundbar & the other has a 5.1 surround sound system. I may not exactly be an audiophile, but I do appreciate good sound thus my substantial investment into my surround sound system for my family room. Also when I purchased my first flat screen TV that only had rear facing speakers (which seems to be the only way they come any more) I found that the purchase of a soundbar (if not a surround sound system) is now a must.

With all this said, while Tablo lacks surround sound I don’t perceive any noticeable issue with the sound it does deliver. At least nothing more than the fact that I have to turn up the volume a few notches when I use Tablo vs my other TV sources - PSVue, Netflix & Amazon Prime.

For those of you who experience a noticeable sound issue, especially if it is noticed by those who don’t otherwise perceive a difference between a surround sound system & TV speakers & wonder why one would spend so much money on such a system (as my wife), then I would think you must be experiencing some sort of problem that is not normal for Tablo’s sound quality.

Perhaps this is a clue.

Recently my Tablo recorded audio on a re- run of the X-files had a “buzz” sound on the actor voices. Other recordings made from other TV channels seemed OK.

The problem recording came from an unusual TV sub channel broadcast format. In my area all TV sub channels higher than “.1” are broadcast at 480i, which yields a 4:3 format which matches the older movies seen on older TVs.

This station 8.2 broadcasts at 720p, and even adds surround sound on older movies that I doubt were filmed in 5.1 audio. See screenshot below for Sabrina the Witch. Perhaps this broadcast format confuses the Tablo recording codex that might have expected such a movie to have been broadcast at 480i in Stereo instead of 720p with a pseudo surround sound matrix.

Note that the older Sabrina movie shows up in 4:3 format even though the broadcast is 720p, which would suggest they could have upscaled the video to a full-screen format but chose not to.

It would be interesting to see if other Tablo users that experience bad audio on recordings experience this from only one TV channel that has similar characteristics to the 8.2 channel in my viewing zone (Knoxville, Tennessee). 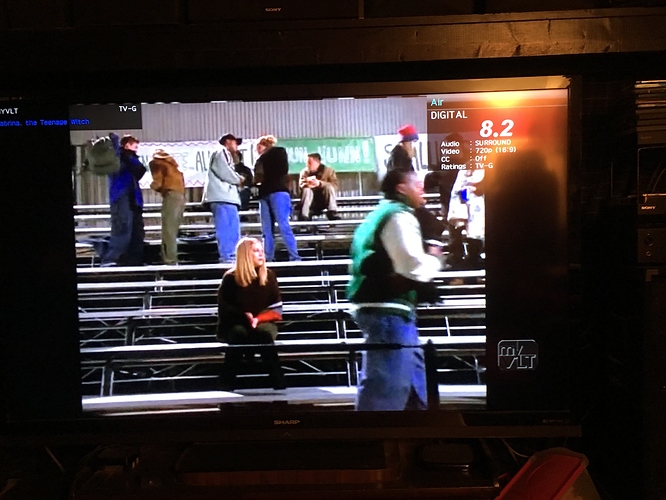 You are definitely not the only one with this issue. It is a very annoying issue that is almost unbearable.

Do you experience this when watching live or just on the recordings? I don’t notice it on live TV, so it really makes me think it is the recording parameters.

Do we know if the different video quality selections in the Table settings have any effect on the audio quality?