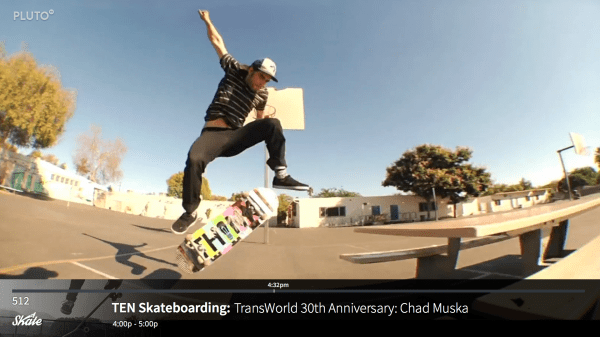 Pluto TV, a video streaming service targeting cord cutters, has differentiated itself from other over-the-top competitors like Netflix by offering a more TV-like experience with over 100 "channels" you flip through in an interface that looks similar...

I’m really liking Pluto tv. Thanks for the share. I had no idea it even existed. Granted most of the sources can be had via other ways eg YouTube but it’s a nice way to present and discover new things. I like its very cable tv like format.

I can’t wait for it to come to Roku. Using screen mirroring for now.

As more and more streaming options come online, it is just devastating to cable. Whenever someone asks me about OTA and antenna installation, I also point them to streaming devices to couple with their OTA. Older people in their 60’s and 70’s are not that much aware of the Internet streaming capability. When they see this, the decision to cut the cord makes it much more easier.

My wife and I don’t miss cable at all, supplementing our OTA with Internet streaming. In fact we now have a surfeit of viewing options and content. I prefer spending a few dollars a month on channels such as Acorn than on cable.

I asked my wife the other day, “Do you think we’ll ever go back to cable?” “Why?” she replied.

My sister would love to cut the cord but she is a frothing at the mouth sports fan and that just kills it for her. Personally I’m not a sports fan and neither is anyone in my house so the question of cutting the cord was a very easy decision.

My sister would love to cut the cord but she is a frothing at the mouth sports fan and that just kills it for her.

I had the same dilemma. So I ordered SlingTV for ESPN but found myself watching it maybe twice a month. I had enough sports Saturday through Sunday (college and pro) on the local channels that I found myself using ESPN less and less. Cancelled it after three months.

My wife was a Food Network fan (also on Sling) but found that she preferred PBS Create as a cooking channel.

I’ve told her about it before. Maybe when she is ready.

Wow! I know this is talking about Pluto.tv coming to Roku, but because of this post I checked it out on AppleTV. I hope @TabloTV checks this channel out for ideas on their coming AppleTV app. The grid has an active window that plays video. It’s good to know what is possible on the new AppleTV.

Pluto TV is now in the Roku channel store. It has a few bugs that they are evidently working through.

Also added to the Roku channel store is a CW Seed channel. It does not require a cable subscription. It has a lot of CW and other shows, including every American episode of Whose Line Is It Anyway… ever.

Just curious, does the tv grid have live video running?

Just tried it, but really not usable for me. Maybe it will get a fix for Ruko 3 after a bit.

What a bummer… Roku streaming sticks aren’t supported. Guess what I have on each of my 4 TVs. Ah well, I do have an old Roku 2 sitting in my junk box. Might be interesting to give it a try. Earlier, I downloaded their software on my old Windows 10 laptop. They have a few channels I can see myself watching.

Roku and Android and FireTv stick missing some channels that Windows had such as The Adams Family channel.

Android and FireTv stick versions are usable but NOT Roku wireless on 5 GHz.

One thing I did notice is there seems to be a difference in channels available when compared to the web vs iOS apps vs Roku … has anyone else noticed some channels are available on one platform and not another?

I just noticed your comment as well about missing channels … weird…

Did it update today?

Actually works great on my Roku3

Me too. The initial startup is a little slow but once it’s going, it works great. It is almost like a cable sub. The live news channel with MSNBC is kinda neat…

It must have updated since I watched it last night. Today is better and working. There are still channels missing that are there on the Windows version. Guess I could always run an HDMI cable from the laptop to the TV.

Turns out my Roku streaming sticks are supported after all. The message I got when trying to install was a little misleading, and shortly afterwards, my Rokus updated to software V7. Once that happened, the Pluto channel appeared. Pluto requires V7 on the Roku.

Edit… Correction, only the 3500X seems to be supported. 3400X doesn’t see the Pluto TV channel. Have an email in to their support now, as they believe that any Roku should be able to run it, as long as they’re on V7 of the Roku software.
I don’t want to upgrade the one Roku that’s a 3400X, as it’s an MHL type that’s integrated in to the remote of my JVC TV.