I am now locked out of my Tablo. It says I must upgrade. I’ve not been upgrading, since I wished to maintain web access. I do not have the Windows Store available. Please post the Windows App somewhere that we can download without going through the windows store.

I am a little confused. What do you mean you are locked out of your Tablo? You can still use Chrome or Edge to access your Tablo.

My Quad is on the current firmware and no problem using my.tablotv.com. 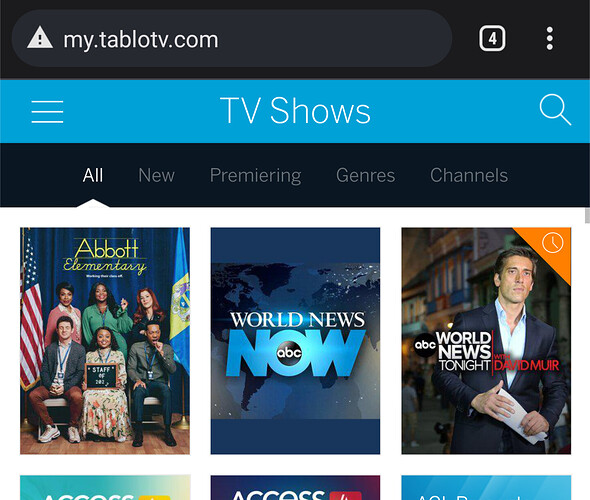 Hi @cyberbillp, upgrading your Tablo will not prevent web access, and in fact is necessary to maintain it. For accessing your Tablo on my.tablotv.com, the current minimum firmware you must be on is 2.2.38, which is one behind the current one of 2.2.40.

What you might be thinking of was when Google was making changes to Chrome that had a chance at preventing access to my.tablotv.com. However, this change has been postponed for the time being.

Regardless, upgrading the Tablo software itself is not related to this, so you can go ahead and do that safely.

Thanks. Yea, in my opinion, the Tablo is perfect, so I’ve not been upgrading (don’t fix what ain’t broke), but hitting the “Later” button instead, out of fear that I’d loose web access due to the google change.

After “upgrading” everything worked fine again. Still, not having access to the Windows store app concerns me if I’ll need it in the future. I could see others running Win apps via Wine on Linux would benefit from access outside the Windows Store as well.

I could see others running Win apps via Wine on Linux would benefit from access outside the Windows Store as well.

Not sure how/why there would be benefit to your Linux based system. If you have a need for some Windows program, like Quicken for example, then there’s a reason for comparability, but I bought my tablo advertised having the ability to access it from a PC via browser. There was no OS specified, just noted it was “optimized” for Chrome. Never had issues with Firefox, had used Chrome before the “issues” started… the postponed and went away.