The last couple of weeks I’ve had a hit or miss experience with cloud recordings. They recorded just fine as far as I can tell, but for the life of me I cannot get any of them to play. I get the message: A Playback Error Occurred.

This is happening on every recording when it does happen, and I used to be able to fix it by uninstalling and reinstalling the Tablo preview app. And that’s not even working tonight.

I’m using a Tablo Dual Lite, live TV is working fine. Recordings do show the correct length. I watched one of them the other day but can’t get the video to play at all.

And the issue is persisting today. Can’t watch any of my recordings. 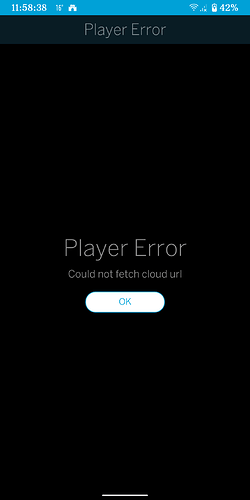 i got my tablo today with 1 month free cloud storage and i also can’t play any recordings: ’ Recording failed due to a network error. Could not connect to Cloud DVR.
any suggestions?

The only thing I can think to do is create a support ticket on the Tablo Support site. That’s what I did but I’m still waiting.

I’ve been a cloud user for awhile, but it’s only recently I’ve been having so many issues with the cloud services. I’d say the last 2 months I’ve had fairly consistent problems. They’ve lost my recordings twice (ones I’d previously watched and saved). Once back in September and again a week or two ago.

I don’t like complaining because the Tablo has been great up until recently, but I really think the cloud dvr wasn’t ready to come out of beta. I’m going to be looking into getting an external hard drive, and hopefully this won’t be an issue with a hard drive.

@Beaugart @deepgoat We experienced a brief issue yesterday which could have impacted accessing cloud recordings - this has since been resolved. When you get a chance, try viewing one of your recordings. You shouldn’t have any further issues. If you do, don’t hesitate to give us a call at 1-844-TABLOTV (822-5688) or send us a ticket here.

So, it’s happening again. I’ve about had it with the cloud recording. It shouldn’t be this buggy. I was watching recordings just fine an hour ago, and now I can’t access any of the recordings.

Cloud dvr was not ready for prime time. I shouldn’t have this issue so often as a paying subscriber.

Anyone that can recommend a good hard drive to purchase?